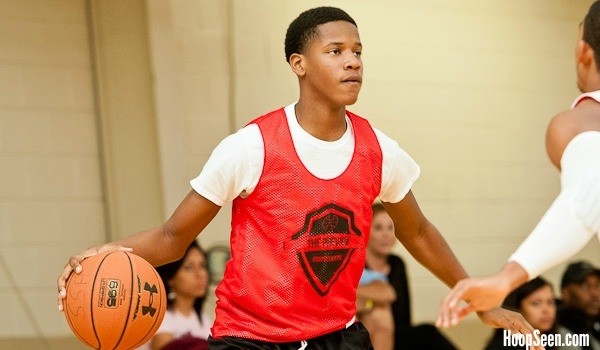 One of the great things about The Fall Preview was getting a chance to see some of the top young players in the Southeast compete. We wanted to get them onto the court before their high school careers officially tip off later this month. The Preview was exactly that...a peek at who has next.

Travis Anderson II, PG, Holy Innocents - Rarely do freshmen point guards come to a team and make an immediate impact but with Anderson, he most certainly will. Coming into The Fall Preview, the 5-foot-10 floor general has been one of the real stars of the HoopSeen Fall League in Gwinnett. On Sunday at camp, Anderson made it be known that he's the real deal at his position. There's a command to his game that mature for a freshman. He's a high-level player that will be fun to watch grow up here in Atlanta.

Kristopher Gardner, PG/SG, Lee County - At this stage of the recruiting game, every freshman should be considered a sleeper. And while that isn't always the case in today's world of instant and easy communication tools, players like Gardner are nice to come about organically. The 6-foot-2 guard was one of the nice surprises of the day. He was always involved in a positive play, shot the ball well and showed off a confident handle.

Chris Parks, PF, Lanier - This wide-body stepped right into a pool of older players and played the role of bouncer with little trouble. At 6-foot-5, 217-pounds, Parks is more defensive end than he is a power forward at this stage of the game. But with that kind of incoming size and overall tough mentality, Parks will be one of Gwinnett County's top young guys to watch this season.

Brandon Pope, SF, Mt. Pisgah - As the day moved forward, more and more people were saying "I really like No. 84." It was hard to disagree with them. Pope's confidence grew each game out and provided a spark every time he came into the action. Where his comfort zone is on the court is still yet to be determined but there are a lot of natural tools to like with the 6-foot-2 wing.

Franklin Smith, PF, Miller Grove - The six-time state champion Wolverines had a couple of strong-bodied bullies on the block last season. But James Walker and Omar Venable have graduated and Miller Grove will look to Smith to fill the middle. Smith, a strong 230-pound post, was one of the toughest guys to move around in the paint. He'll be fun to watch develop on the court over the next four years.

Dalvin White, PG, Norcross - Like Anderson (list above), White has a very mature and steady game for a freshman that has yet to play a high school game. He played pilot to one of the best teams at camp and made sure all of his options were taken care of. When it was time to score, he scored. When it was time to lock someone down, he locked someone down. White will be one of the top point guards in the South for the class of 2018 and it will be fun to see him battle it out with Anderson, Drue Drinnon and other point guards in the Peach State.

Drue Drinnon and Khavon Moore, both class of 2018 prospects, were featured as our top overall performers from camp. You can read that story HERE.