Top performers from the Florida Shootout 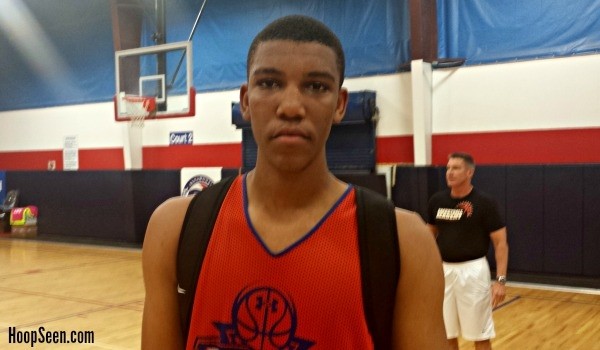 ALTAMONTE SPRINGS, FL - The Florida Shootout pinned some of the best teams in the Sunshine State against each other for a one-day round robin set of showcase games. The one-stop shop was a good opportunity to see some of the top players in Florida go head to head. Here's the top performers from our Justin Young.

Tony Bradley, C, Bartow, 2016
Simply put, there wasn't a more productive offensive big man playing central Florida over the weekend than Bradley. The 6-foot-10 paint-filler has an advanced offensive game in the paint. He always gives a target, plays his size perfectly and knows how to score around the cup. Bradley has a soft touch and good patience. The line-up of opposing big men that he squared up against was a tough bunch and Bradley answered the call more times than not. It is no wonder that he's a nationa; prospect in the class of 2016. The tools are there to be a guy that could crack the Top 40 (check this) in the class  of 2016.

Chandee Brown, SF, Dr. Phillips, 2017
The 6-foot-5 wing forward did a lot of the little things right. He's strongly built and uses his size well on the defensive end and to bump the opposition with good , solid screens. Brown showed an ability to attack the rim and rebound with the fours and fives. He's working in a good high school system and has a good base of skill to work with. Another young Floridian to watch moving forward.

Tulio Da Silva, PF, Arlington Country Day, 2015
The Brazilian has a lot of intrigue to his game. He's big, strong and active.  As the high school season draws closer, we'll be hearing more about him in the near future because the number of available players that have his type of skill set and raw ability for high-major programs will be slim. The 6-foot-8 post man can explode with a simple dribble and gets to the rim. He's all power in the paint and aggressively rebounds in and out of his area. Reportedly, South Florida is already in there really good with Da Silva.

LaDarien Griffin, PF, Providence, 2015
The bouncy 6-foot-7 forward enjoyed a good day's work on Sunday for Providence. Griffin used his athleticism to score, rebound and defend. He was active in three very competitive games and against three very good teams. He was consistent and always on the floor for his Providence team, one of the best programs in Florida. Truth be told, he's being under-recruited.

Kevarrius Hayes, PF, Suwanee, 2015
The future Florida Gator had some ridiculous highlight plays above the rim. He can absolutely sky above the iron. Hayes is still very far from a finished product and will require some patience in his development. But at the high school level, he's going to be able to have second and third chances on the close baskets and put back scores off of missed close range field goal attempts.

Chol Mariol, C, West Oaks Christian, 2019
Hello! The 7-foot-2 center arrived in the United States three days prior from South Sudan to playing in the weekend's events and had the entire line of hoop heads talking about him. Mariol uses every inch of his size to his advantage on both sides of the ball. Understandably, the skinny (under 200 pounds) vertical defender blocked and altered shots all weekend long. He was especially good at the pick and roll and knew where to be after he set his screen. To no one's surprise, he didn't catch a lot of the fastball passes that came his way. He's very weak and will need time to adapt. All and all, this was one memorable first impression. Mariol didn't shrink in his match-ups against a number of quality big men that were in attendance.

Yankuba Sima, PF, Arlington Country Day, 2015
Hello, part 2! The 6-foot-11 import from Spain came to the United States with a big international reputation after his play at the Albert Schweitzer tournament and at the Nike International Junior Tournament in Belgrade. There is no denying his physical traits. He's big. He's athletic. He's wiry strong. He blocks shots, rebounds and runs the floor very well for a player his size.  Sima rebounds well above the competition because of his unique length. He was especially impressive on the offensive end of the floor. Sima has huge hands and a big wingspan. There wasn't a lot of floating on the perimeter and he stuck to what he knows best. What's next? That remains to be seen but his first officially outing in the United States in front of national media was impressive. Don't be surprised to see the elite programs jump into the picture with Sima this season.

Malik Williams, PF, Dr. Phillips, 2017
As the day went on, the value of Williams shined through. The 6-foot-7 forward was active in the middle. Fundamentally, he's good for his position and understands where to be and when to be there. Williams is a good rebounder and plays to his size in the paint. Williams is well-coached and executes to the direction that is given. Keep an eye on him moving forward.