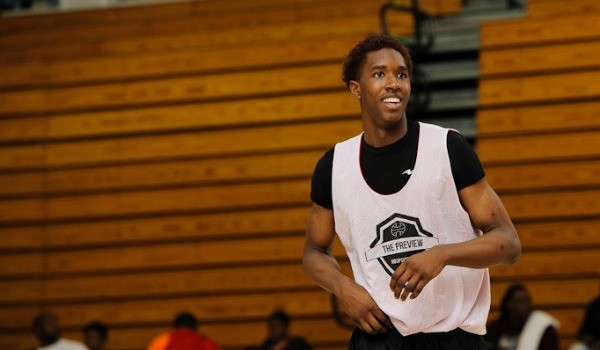 The Elite 100 provided a nice stage for some of the Peach State's top prospects over the weekend and HoopSeen.com was on hand for the action. Here's Carter Wilson's quick-thoughts from the event.

DeAndre Ballard was as advertised

The 2017 Southwest Atlanta Christian prospect was arguably the MVP of the Elite 100 camp. Ballard (pictured above) showed that he can score in a variety of ways and showcased his incredible athleticism. He also plays with a very high motor, which is one of the most impressive parts of his game. High major schools should be flooding the gym at SACA to get a look at him this season.

The 2017 Class in Georgia Could Be The Best In Years

There has been a lot of talk about the 2016 class being one of the best and one of the deepest classes in recent years. The 2017 class could be the class to top it. Along with DeAndre Ballard, Wendell Carter (Pace Academy), PJ Horne (Tift County), Iyiola “Bay Bay” Abayomi (Greenforest) and Victor Enoh (Greenforest) were all forces to be reckoned with this weekend. It is certainly a class that has a lot of size and a lot of athleticism.

Tift County Has Reloaded For A Run At A Repeat

Tift County is coming off of a 2014 state championship behind four starting seniors, including now Georgia Tech Yellow Jacket Tadric Jackson. Tift fans shouldn’t fear the losses because the Blue Devils will be in the mix again in AAAAAA. PJ Horne and Tyrie “Pig” Jackson, Tadric’s younger brother, were both standouts this weekend. Iman Holley (formerly of Turner County), Adam Hester, and Micah Johnson also all showed some positive signs this weekend.

D’Marcus Simonds is Poised For A Big Year

Simonds is now an upperclassman at Buford with high major offers on the table. Buford is coming off of a run to the State Finals, and Simonds entered the gym with a determined look on his face like he had something to prove. He got to the rim at will all weekend, and created a number of highlights that should be bound for YouTube in the next couple of days. He also has the most fun matchup all weekend on Sunday with Ballard. They traded baskets back and forth and went at each other down the stretch of the game.

The recently opened prep school on Highland Ave. in Atlanta will not be short on talent. They had a few players at Elite 100, but the two standouts were Jevon Smith of Milwaukee and Lamont West of Cincinnati. Smith is a solid guard with a lot of quickness off the bounce. West is a wing with a lot of length and jumping ability. He threw down a number of big dunks over the weekend.

The Rockdale County High School product was not on a ton of radars coming into the weekend. He ended the weekend with a number of people talking about him. After his first run on Saturday, he had the sidelines buzzing with his ability to beat defenders with an array of moves off the bounce and his knack for finding teammates. He was arguably the top point guard of the weekend. College coaches may want to get this guy on their radar as the high school season gets under way.