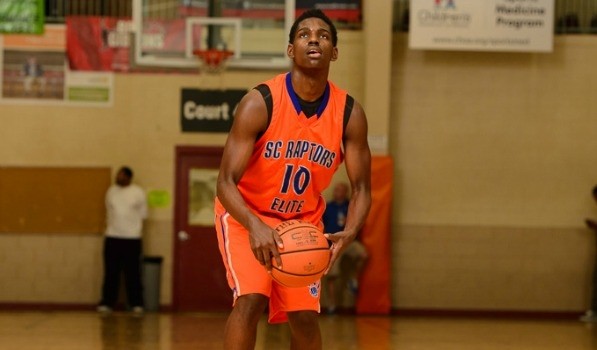 Jawun Evans, one of the top point guards in the country, is moving into the final stages of his recruitment. The 6-foot guard from Dallas (Texas) Kimball High School is about to embark on four official visits before ultimately making his decision.

After ending his summer with his SC Raptors Elite team and winning the Havoc on the Hardwood, Evans cut his ever-growing school list down to four schools - Illinois, Oklahoma State, Southern Cal and Texas.

"I felt like those four schools - we had a good relationship. I feel like I could show my talent at these schools the best," Evans said. "I wanted to see new things. All of these schools would allow me to do that. Plus, all of these schools are point guard schools. And that's a good thing, too."

Evans has set up three of his four official visits with the finalists. His first trip will take him to Southern Cal on August 29. A week later he will go to Illinois on Sept. 5. On Sept. 24, he will travel to Oklahoma State. A visit to Texas is still in the works.

All four schools have an equal parts shot at landing the five-star guard, he says. What does he like about all four options?

On Illinois: "Coach (John) Groce is a great coach. I have a great relationship with him and coach (Jamall) Walker. He's telling me that I can come and give me the ball at a big program. To me, that's a big deal."

On Oklahoma State: "Me and coach (Butch) Pierre are cool. He's always telling me what I need to know. He's straight up with you. I feel like since they had a guard leave that there will be room for me to come and play."

On Texas: "I've been down there when I had my state game. We played at the University of Texas. It is a good environment. The night before we played, I went to one of their games and watched them play. They let their guards do what they know what to do...They said how TJ Ford wasn't just big guard. He was kind of my size and they have related the two of us together."

On USC: "I have a great relationship with USC. I feel like it is a great school. I like the way they get up and down the floor. It is a guard school, too."

Now come the visits. Evans will take trips to each of the finalists.

Evans said he wants to fully examine each program not just in the here and the now but about the long-term benefits of each program.

"I want to look for how the school is academics wise so I can see how much help they can give you once you leave," Evans said. "I want to see how successful people have been once they've left that school. I'm looking at how much they develop their players."

Like most recruits, playing time from the start is a big plus for Evans.

"I want to go somewhere that I can come in and play right away. I want to have the ball in my hands right out of the gate. To be honest, I feel like I can handle it," Evans said. ""My biggest strength is getting my teammates better and getting them open shots."

Evans, a native of Greenville, S.C., said he's open to playing anywhere the country and that the draw of being closer to home isn't a deciding factor in his decision.

"I wanted to venture out and see new things. So, where the school is doesn't really have anything to do with it," he said.

For the school that ultimately lands Evans, the program will be getting one of the best winners in the country. He spearheaded a team that went 50-3 this season.