SC Raptors win the 17U Bob Gibbons Tournament of Champions 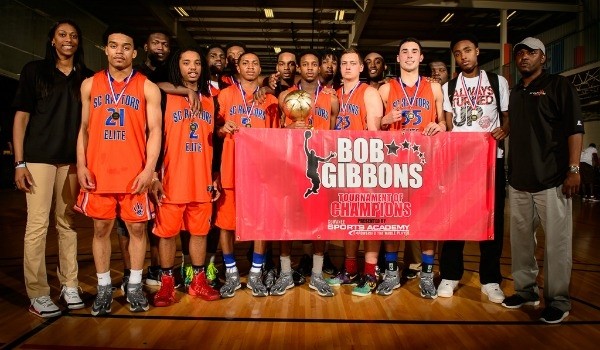 SUWANEE, GA -- To win the 2014 Bob Gibbons Tournament of Champions, it took patience, defense, speed and balance. No one did that better than the South Carolina Raptors.

The Palmetto State kids beat a talented and big Atlanta Xpress team 71-51 to claim the 17 and under division of the historic tournament on Sunday afternoon. The victory was impressive. But it didn't come easy or without a little pain.

The Atlanta Xpress scored the game's first eight points. The team used length, speed and athleticism to break the game open from the opening tip and looked like Sunday's final would be a quick one. But a never-say-die group of the South Carolina Raptors held strong and withstood the run.

A Doral Moore elbow caught guard Tyler Hooker square in the nose and knocked him to the floor that left him dazed and confused. The Xpress were up 16-13 at the time. After a five-minute delay, the Raptors recouped and recovered to push forward.

The team went on a 21-8 run to close out the first half thanks to great scoring from wing Jamel Taylor, defense from Myles Smith and rebounding from Dorian Pinson. The Raptors closed the first half on their terms and never relented in the second half.

Gage Ellis scored 20 points to lead all scorers while Taylor pumped in 17 points. Point guard Juwan Evans scored 14 in the win. Evans was terrific as a passer, scorer and defender throughout the tournament.

Tookie Brown led the XPress with 14 points while Danjel Purifoy was one of the most versatile players on the floor. He finished with 11 points. Class of 2017 wing MJ Walker added 10 points.