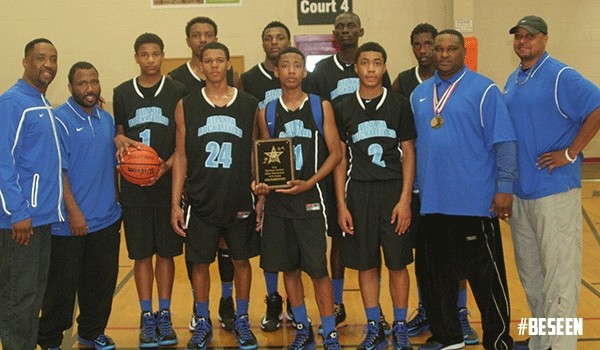 SUWANEE – Atlanta Rockafellas has a frontline which could be the envy of most high school age teams. This team is not in high school, just yet, but they are setting the foundation and building on the future playing an age group up.

Rockafella used its length and quickness to beat USSAA 49-40 to win the 15U championship of the Norman Parker Elite Showcase at Suwanee Sports Academy on Sunday. The Atlanta-based organization is the top 14U team in Georgia and entered the tournament late after a last-minute scratch. They handled the competition just fine.

When they came in they immediately set the tone, which led to them making a run toward the championship. Treyvon Duval scored a team-high 17 points in the title game but his dominance was a team concept.

Rockafella controlled the glass in second chance opportunities. They also put on some defensive pressure, which forced USSAA into some untimely mistakes. Also, having the presence of 6-foot-8 Wendell Carter and 6-foot-7 Victor Enoh. Both rejected a few shots limiting the Tennessee-based team to one shot.

USSAA played the game close in the first half as it trailed 22-19. The second half got off to a decent start they were unable to get into a rhythm.

One of the lone bright spots in the game for USSAA was Cedriontis Wilson. He finished with a team-high 17 points.