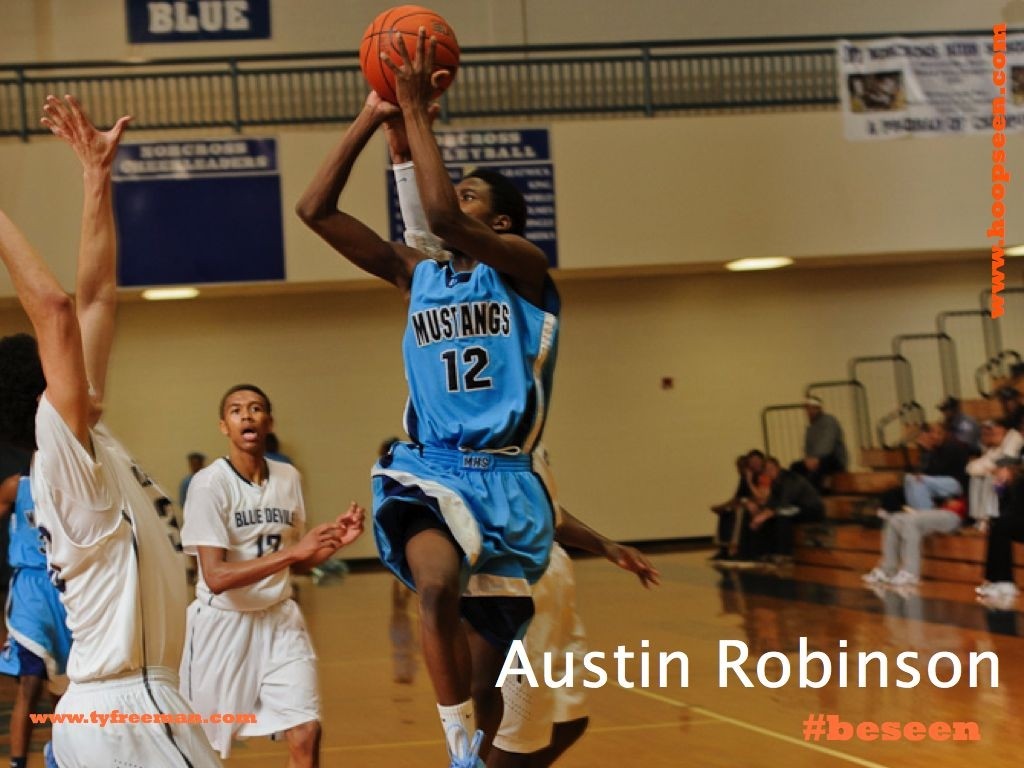 SUWANEE – The biggest upset of the post-season took place during the Region 7-AAAAAA when Meadowcreek’s Terrance Snelling hit a 3-pointer at the buzzer. North Gwinnett was heavily favored and the fourth-ranked team in Class AAAAAA. So instead of preparing for the Road to Macon, the Bulldogs watched the Mustangs earned one of the four state-playoff berths from the region.

Meadowcreek (10-13) enters as the Region 7 third-seed after beating Collins Hill 56-53. In the teams win over the Eagles, the Mustangs’ Austin Robinson (pictured) hit a 3-pointer at the buzzer. Meadowcreek started the region tournament as the seventh seed.

At the start of the season more than 800 teams start out on a journey to win a state championship. After this past weekend that number dwindled down to 192 through six classifications and the 1A private bracket. The Mustangs are back in for the first time since 2010.

“When you have an inexperienced team all they needed was a win against good quality team,” said Meadowcreek coach Billy Smith, after the upset. “This win will boost our teams confidence and will help us in the state playoffs.”

The confidence started when Meadowcreek was preparing for the region tournament. Snelling told Smith that he was not going to let his team. The 6-foot-3 small forward called for Smith to design a play the Mustangs always practice.

Meadowcreek trailed 45-34 as the third quarter closed when Snelling made a 3-pointer at the buzzer to pull within eight points going into the fourth. With 3.2 seconds left in the game, the senior heaved a 35-foot three-point shot that sliced through the net and set off the Mustangs into frantic celebration. “I told them to believe that God put us here to succeed, not to fail, not to give up and to keep fighting and working hard,” Smith said.This belief and a little bit of luck pushed Meadowcreek over the hump. It also ended the Bulldogs season with a 19-5 record.

Note: In another upset, sixth-ranked Mount Zion lost to Creekside in the Region 4-AAAAA tournament.

North Hall’s Ethan Smith and Buford’s Kyle Doyle helped their teams finish tied for first in the regular season. This is exactly why the coaches had a hard time picking who was the region’s best player.

So, after some intense voting both players were selected as the Region 7-AAA Player of the Year award. Both players are their teams leading scorer. Doyle is averaging 21 points and 12 rebounds a game. Smith is averaging 20 points a game. Doyle, a 6-foot-7 forward, has had Memphis, Duquesne and LIU Brooklyn inquire about him this week. Smith has signed with the University of North Georgia.

There is no surprise on why Eagle’s Landing went through the region regular season unblemished. It had depth, size and speed. This was enough to help the coaches elect Eric Wortham as Region 4-AAAA Player of the Year, while Clay Crump was named the Coach of the Year.

Here are the other players on the all-region team:

Cantrell picks up Player of the Year award

Gainesville High’s Shaquan Cantrell set out to have a breakout senior campaign, which he did. The 6-foot-3 forward led the Red Elephants in scoring to earn the Region 8-AAAAA Player of the Year award. Cantrell averaged 21 points a game helping Gainesville win the region tournament.

Here are the other players on the all-region team: