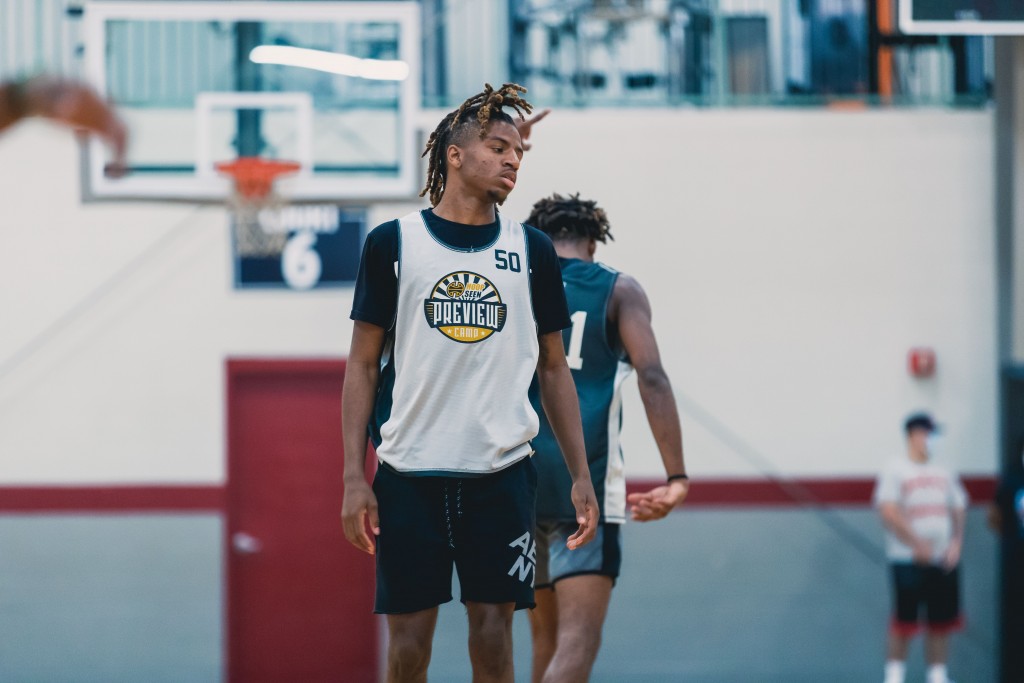 Our first Fall Preview camp is in the books as we welcomed players from across the southeast. While picking the cream of the crop is always difficult, our staff of coaches and evaluators have selected a few of their favorites. Here is our first group of top performers.

David Giddens, 2021 G, Tucker High School: Giddens was one of the most active players at the camp. He exudes energy. Early in the day, he was standing out because of his dominant rebounding. After grabbing the boards, Giddens would start the break and kick it up to the guards running the floor for easy layups. As the day went on, he began to pick it up on the offensive end showing his versatility. He was aggressive in attacking the rim and converted on multiple powerful dunks. He was also able to extend the floor, knocking down a few jumpers. Giddens has a lot of the qualities that coaches seek. He is active, bouncy, and plays with a high motor.

Jameel Rideout, 2022 G, Discovery High School: Rideout ended the day as one of the most talked about prospects. The 2022 PG out of Discovery High School had it going all day. He has a knack for altering the pace of the game at just the right time. His ability to change directions and stop on a dime made him difficult for defenders to stay in front of. Rideout’s pull up jumper was lethal. He would take a couple of dribbles to get to the middle of the floor then rise up to release. That shot was automatic. This is a player that is aggressive in attacking the basket and consistently finishes. He was one of the best guards of the camp.

Destin Logan, 2022 G, Parkview High School: The lefty may have been the best shooter at the camp. Logan consistently knocked down 3-point shots all over the perimeter. It did not take defenders long to respect his long range, but it did not matter. He was effective with his quick jab step, getting his defender off balance and then rising up for a shot. As a shifty guard, he had no problems blowing past defenders to get to the rim. He has a lot of length with a strong, lean frame. He constantly used his long arms to be disruptive on the defensive end.

Jermahri Hill, 2021 G, Berkmar: One of the more offensively aggressive guards to show up at the Fall Preview Camp was Berkmar guard Jermarhi Hill. At 6’4, Hill made it a point to use his length and athleticism to get to the line for easy buckets. His ability to finish through contact at his size presented a ton of matchup problems for smaller guards. Not only was he able to get to the rack, his handle helped him create separation for a more than couple nice jumpers as well. Charleston Southern was the first to offer Hill just a couple weeks ago. Expect more to follow this upcoming high school season.- Bre Singleton

Asher Woods, 2022 G, Parkview: Controlling the pace of a game is a skill that every solid guard needs to have and Asher Woods had it on full display early and often. Any defender on him had a tough time stopping the 6’3 combo guard when he had the ball on the break. In the half court, he showed off some shifty moves to get past the person in front of him and finished through contact multiple times. One thing that really stood out was Woods’ patience once he broke down defenders and got into the paint. When he couldn’t get a shot up, which was rare, he’d find shooters in the corners or absolutely thread the needle on some beautiful passes, which his teammates seemed to really appreciate. Look for this to be a breakout season for the 2022 Parkview player.-Bre Singleton