Border League: 5-star battle tips off the action in Arizona 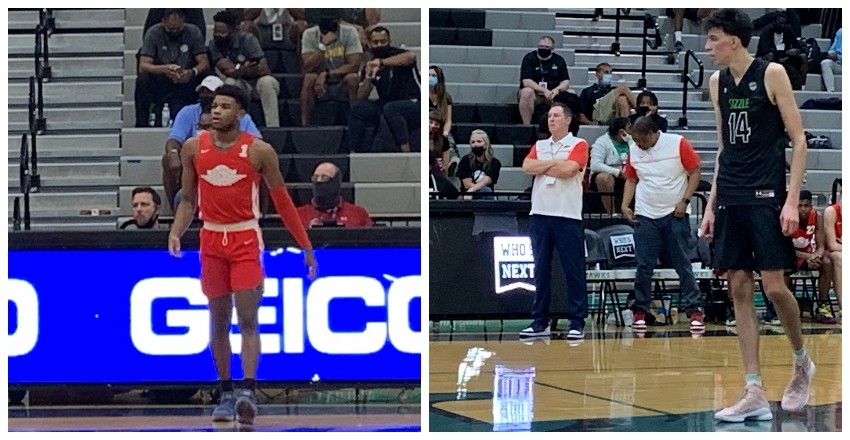 Jaden Hardy and Chet Holmgren have something in common. They are both elite basketball prospects in the class of 2021 and both guys are strong candidates for the top overall spot nationally in their class. The two headlined the match-ups on Friday night at the Border League.

Hardy was nothing short of special in the opening half of Coronado’s 59-56 win over Holmgren and Team Sizzle. The 6-foot-5 guard from Las Vegas was in a zone in the first 16 minutes of action. He hit six of his eight three-point attempts en route to 26 first half points.

I’ve said it for a while now - he’s the most exciting player in the class of 2021. Hardy is electric every time he touches the ball and never backs down from an opportunity to shine on the biggest of stages. Sure, he’ll force things a bit here and there and, yes, he should probably give up the rock a tab more. But when you have confidence, a hot hand and a big match-up, you want the dudes to be the dudes.

Hardy was that dude on Friday night in the suburbs of Phoenix. His powerful first half was the space his club needed against Holmgren and Sizzle. The surge was going to come. You’d expect that in a highly anticipated game like this one.

It took some time for Holmgren to find his flow in this game but once he did, there were some wow moments from the long and lean big man from Minnesota.

There was a moment when Holmgren blocked a dunk attempt from Osiris Grady in the second half and that changed the entire way Coronado attacked the basket. Holmgren finished with nine blocked shots and his sheer presence inside the paint was enough for the opposition to think twice about going to the iron. Holmgren is like that. Not too many players in America have that sort of respect in the paint.

Holmgren finished with 17 points, nine blocks and eight rebounds in the loss.

We saw great things from both players in the pairing of the top two ranked players in the field. What a way to start the action at the Border League. Hardy made the noise he usually does, finishing with 30 points in the win. Holmgren gave you the moments that you just don’t see everyday in the gym.

Kamari Lands, Prolific Prep: There are resemblances of Cameron Reddish throughout Lands’s game. The 6-foot-7 native of Indiana gave you flashes of why he’s a national prospect in the pairing against Big Red, aka Mater Dei. Lands can put the ball on the floor and as good of an attacker there is in the building. But then we saw his range on the jumper, and boom, that’s a tough shot to guard for any club. Lands was as impressive as any player I saw on Friday night at the Top Flight division.

Eric Dailey, Jr., IMG: Dailey came out firing to open up the action here in Arizona. He scored 16 of his team’s 36 points in the first 16 minutes of action. As you’d expect, the action took some time to get into a flow but Dailey was the only player on the court who seemed to have some rhythm here on the biggest stage of the fall. He knocked down a corner jumper, slashed to the rim for a score, got to the free throw line and gave headaches to anyone who tried to get in line to defend him. Overall, he was the best player on the floor

Zaon Collins, Bishop Gorman: The future UNLV guard was the man who Gorman leaned on down the stretch  in a highly competitive game against Lake Norman Christian. Down by as many as seven with under a minute to play, Collins made the plays that his team needed to steal away a victory. He attacked the basket and scored in final minute of action. Collins wanted to be the guy who shined down the homestretch and he did just that. He finished with 15 points, five rebounds and five assists in the win.

Jordan Pope, Prolific Prep: The junior point guard had it cooking on Friday night. Don’t be surprised to see him finish the weekend as one of the upward trending players from the event. He earned these words with his play throughout the action against Mater Dei. Pope was in total control throughout the game and when he ran the show, the offense ran the most efficient for Prolific. Pope is a shot-making, pace-controlling guard with some toughness to his game.

Mouhamed Gueye, Prolific Prep: The 6-foot-11 class of 2022 big man is one of those kinds of players that you envision as a college prospect and know his best days are still to come. Don’t discount that however as him not being ready to compete right now at this level. Because he is. Gueye is your prototypical international big man who runs the floor, blocks shots and wows you with a teaser play here and there. Playing against an active motion club like Mater Dei, we saw Gueye work through some mental defensive sets. That was good for him. It’s easy to see why he’s considered one of the best in his class nationally at his position.

Moussa Diabate, IMG: As you’d expect for the first game of an event  and coming across the country, Diabate had a hard time finishing at first but found his groove in the second half when IMG started to roll. He’s making athletic plays that few guys can do in this class The speed in which he can get from the wing to the rim is quite unique for a player of his size. But his agility, footwork and overall athleticism is a trait that you just don’t find in guys with his size. That’s why he’s in high demand and held in high regard. Even in a ho-hum game, we saw the wow factor that comes with him.

Jett Howard, IMG: The little things that Howard does are really important for his IMG club. He finds ways to get his teammates in position to get open looks - good looks - and finishes. Howard shot well and rebounded even better. The 6-foot-5 junior is a plug and play guy. He’s always going to find a way to be productive on any team he is on.

Joyful Hawkins, Lake Norman Christian (NC): The well-traveled big man from Brunswick, Georgia had some great moments in a back-and-forth tussle with Bishop Gorman. He did what he always does well - scores in the paint, grabs tough rebounds and runs the floor. As he gets more accustomed to his new squad, it will be interesting to see how his game develops with Lake Norman.

David Green, Lake Norman Christian (NC): The sub 6-footer was impressive in his match-up against Bishop Gorman’s Zaon Collins. Green was super speedy with the ball in his hands and turned up the action by constantly pushing tempo to the rim. Green was one of the nice revelations on the day. In a game with Mikey Williams and two Division I guards - Zaon Colilns (UNLV) and Will McClendon (UCLA). you could make an argument that Green was the best guard on the floor.