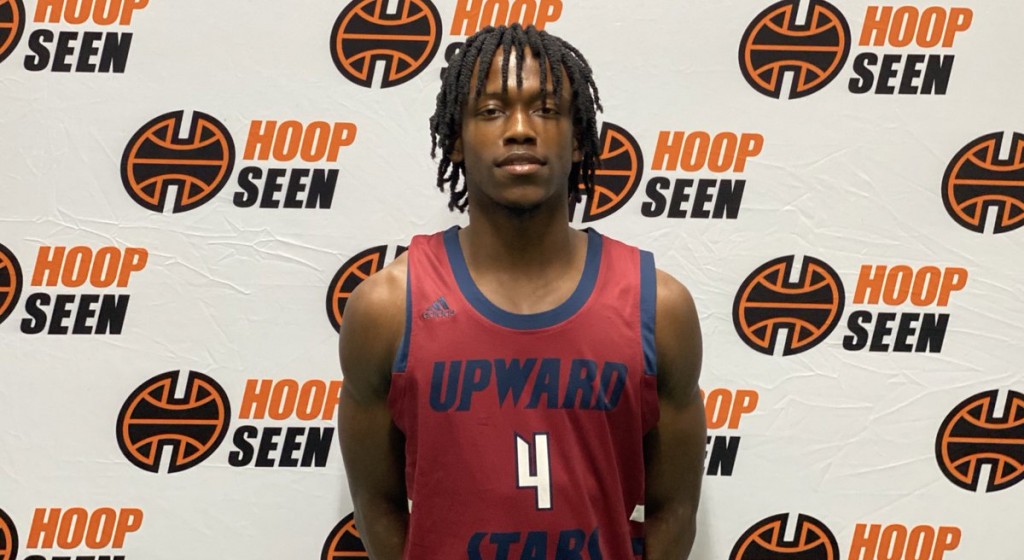 SUWANEE, GA  - Every single court of the HoopSeen/Be The Beast Always Live Showcase was loaded with collegiate prospect talent. Every. Single. Court. With that, there is and will be so much to comb through from the weekend. Here’s a peek into what Justin Young saw from high above the action at Suwanee Sports Academy on Saturday.

Jalen Breazeale, Upward Stars: Two games, two big impressions. The speedster was dialed in and pumped in the buckets time and time again. He was consistently impressive for the Upward Stars. Dorman High School is no stranger to quality college players and Breazeale looks like he’s next in line for the stellar Palmetto State program. He was, without question, one of the best players in the building on Saturday.

George Pridgett, Aim High: The class of 2021 guard had a stellar showing against Team Forrest on Saturday night, scoring 25 points, grabbing six rebounds, handing out six assists and collected two steals. Pridgett is a model of consistency and was the engine for his talented Aim High squad. There is a patience and maturity to his game that allowed his team to stay even-keeled in tense situations. The Roswell (GA) point guard delivered. He’s been consistently good this entire summer.

Jalen Deloach, Team Huncho: The big man is off to post-grad in the fall and he’ll take a strong summer resume with him. In the night cap against a good Team Eat (NC) program, the big man scored 18 points and ripped down 14 rebounds. His game didn’t pull any punches and he owned the paint as a rebounder and put back man. That’s where the real value of what Deloach can be at the college level is. When he’s around the rim, he’s at his very best. We saw that on Saturday night.

Christian Wright, Game Elite: Defense will get ya noticed. Believe that. Wright has some of the quickest hands in the game and those swipes will activate the offense. He had six steals against Team Dickerson in a night cap win and pumped in 17 points along with his six rebounds and four assists. Wright has impressed me every time I’ve seen him this summer with Game Elite and was a catalyst in his team’s win on Saturday night.

Jusaun Holt, Team Dickerson: It is pretty well documented on this site my appreciation for the 6-foot-6 wing and his projection to the next level. He’s one of the most versatile and dynamic players in Georgia’s 2021 class. We saw him go for a cool 27 points (9-19 FG, 3-10 from 3, 6-6 FT), six assists and three rebounds in a loss to Game Elite on Saturday night. Holt is so tough to guard and his motor seems to have a never-ending supply of gas that fuels his game.

RJ Noord, AC Georgia: The Heritage guard is one the more versatile guards in the field for this event and we saw his interchangeable value on both sides of the floor in a spirited win over the Upward Stars on Saturday afternoon. Noord can guard multiple layers all the while scoring at the rim with physicality and power. He’s used the pandemic to bulk up and that has paid dividends for the ever-present rim attacker. Noord was a tough man to stop en route to the rim.

Jamarii Thomas, Team Curry: In the opening game of the event, Thomas showed why he’s a coveted player in the Southeast. The Burlington School (NC) guard is a nice combination of passing and scoring. His fearlessness in touching the paint allowed him to score against size and in traffic. When he did collapse the defense to him, he passed well out to scorers and shooters. Thomas’s game is worth a longer look to move interest over to offers.

BJ Freeman, Team Eat (NC): It was a strong day of work for the powerfully built wing from Raleigh. He recorded a 20 point, six rebound, four assist game against Team Huncho, one of the best teams in the South, on Saturday night. Freeman was the most consistent player on Team Eat’s talented roster. He’s an efficient scorer from inside and out. His strength and size is too much for most high school guards to handle, allowing him to pick and choose where he wants to spray his offense around.

Chris Cole, Team Forrest: The 6-foot-6 guard from Brookwood High School was an eye-catcher on Saturday evening. The long wing showed off range with his jumper, he has ideal college size for his position and a soft touch when he scored it. Cole is still getting better and the player he is now pales in comparison to what he can become with further development and opportunity.

Deante Green, Tea Marie: The 6-foot-9 forward from The Christ School (NC) showed off an array of offensive firepower and shined inside the paint. He finished the buckets that someone of size and skill should finish. Green will show you flashes of outstanding ability that would translate well to the highest levels of hoop. He was the best underclassmen I saw on Saturday at the event.

I love the way Omarion Smith of Aim High plays. He keeps the engine running at all times, rebounds with purpose and has amazing timing as a shot-blocker.

Andrew McConnell of Team Huncho is one of my favorite shot-makers in the South’s 2021 class. His pull-up is as pretty as a girl on prom night.

Team Huncho’s Travis Burrus is the best point guard in Georgia that A. isn't being recruited enough and B. that we aren't talking enough about.

It was good to see Team Carroll Premiere’s Dallas Howell back in action again. He’s one of the best motor men in the South. We saw that effort yield 16 points and 10 rebounds against Georgia Select.