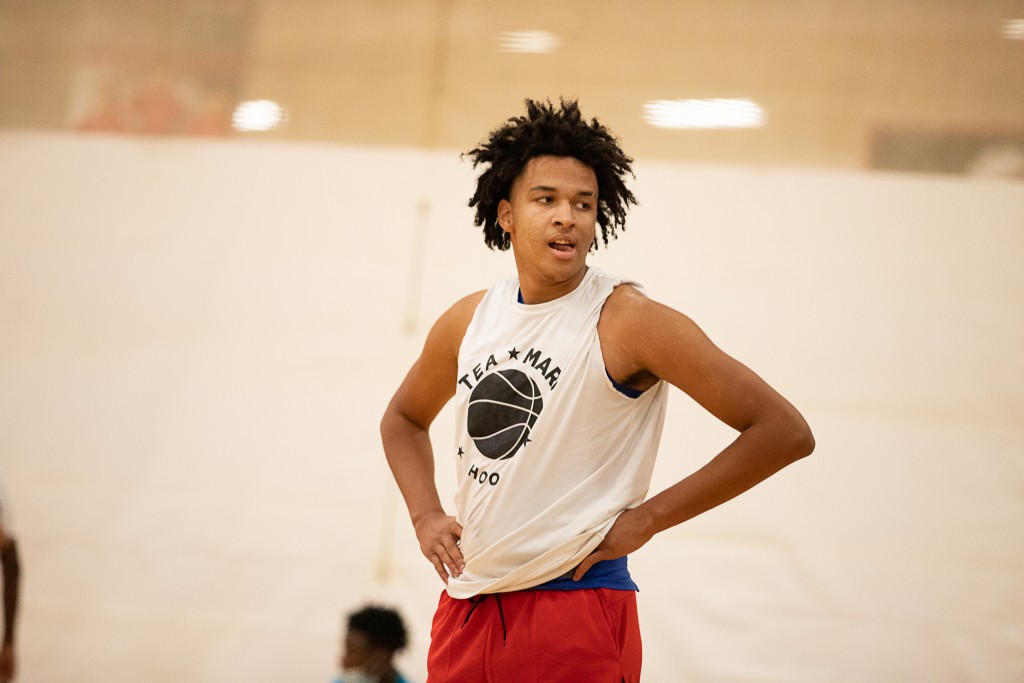 SUWANEE, GA - It felt good to be back on court five at Suwanee Sports Academy. Court five is always home to some of our biggest and largest crowds because of the level of teams that are selected to play on it. The crowd was limited because of the COVID-19 crisis but the talent was still there on the floor. Here is a look at some of the players that caught my attention after the first day of The HoopSeen/BeTheBeast Always Live event.

BJ Freeman, Team EAT - Production is what Freeman can bring to a college program at the next level. He is always around the ball, rebounds, can score in the paint and can score from the outside. At 6-foot-6, Freeman did not back down from getting his hands dirty and battling for rebounds and cutbacks against bigger opponents. Against Team Curry he had 16 points and 8 rebounds. Against Team Huncho he scored 20 points and grabbed 8 rebounds.

Deante Green - Our top-ranked player in North Carolina for the 2022 class, Green showed that he is worthy of the billing in both of his games yesterday, Green scored 36 points and grabbed 15 rebounds on the day. He tells HoopSeen that he recently picked up an offer from Georgia Tech and has Zoom meetings with Georgia and Texas coming up this week.

Breon Pass, Tea Marie - On the gridiron, Pass has offers from SEC and ACC. He now holds offers from those same conferences for his play on the basketball court. One of the more consistent shooters that I saw yesterday, connecting on 4-10 from beyond the three-point line. The ultra-athletic guard is as quick as any that you will find and he makes defenders miss.

Jaden Harris, Team Huncho - My first time seeing Harris and I was impressed. The aggressive guard thrives at attacking the rim and getting past defenders. He showed a consistent shot throughout the day finishing 7-16 from the floor for 18 points in their win yesterday. He recently picked up an offer from Cleveland State and his high school coach, Jesse McMillian from Norcross High School tells me that Miami (OH), Wofford, Georgia, Belmont and Georgia Tech have recently been in contact.

Josh Beadle, Upward Stars - Clemson bound guard Josh Beadle showed what made the Tigers make him a priority and pull him away from hometown South Carolina. He can do so many things with the ball in his hands. He makes defenders miss, he can score from all spots on the floor and he can pass, at a high level. Beadle also made his presence known on the defensive side of the ball coming up with 6 steals in his two games. Beadle scored 9 points against AC Georgia and 16 points in win over Team Curry.

The Team Curry twin towers Kuleul Mading and Jonas Aidoo was fun to watch. A lot of rim protection on the floor when they are both in the game.

Was impressed with Team Curry guard AJ Allenspach. The 6-foot-5 guard showed some athleticism on a couple of high-flying dunks and showed a consistent shot.

HYPE guard Jason Edwards has that dog in him. He went right at Scoot Henderson in the evening match-up yesterday. The 5-foot-8 guard didn't back down and scored 26 on 9-12 from the floor and 4-6 from three. This kid is the real deal and should see his recruitment pick up.

NC STATE GETTING MORE THAN A SCORER

Watching Terquavion Smith for Tea Marie is always a show. He brings so much intensity to the floor and he loves to compete. His shot wasn't falling as consistently as it usually does for the NC State commit but he found other ways to impact the game. Smith finished with 9 points in his first game of the day but he was one of the best on-ball defenders I watched yesterday. A member of the Farmville Central High School team in North Carolina that has won the past two state championships, Smith will look to take over the reigns completely for his senior season.