Recapping a brilliant day at the Hawks Naismith Holiday Classic 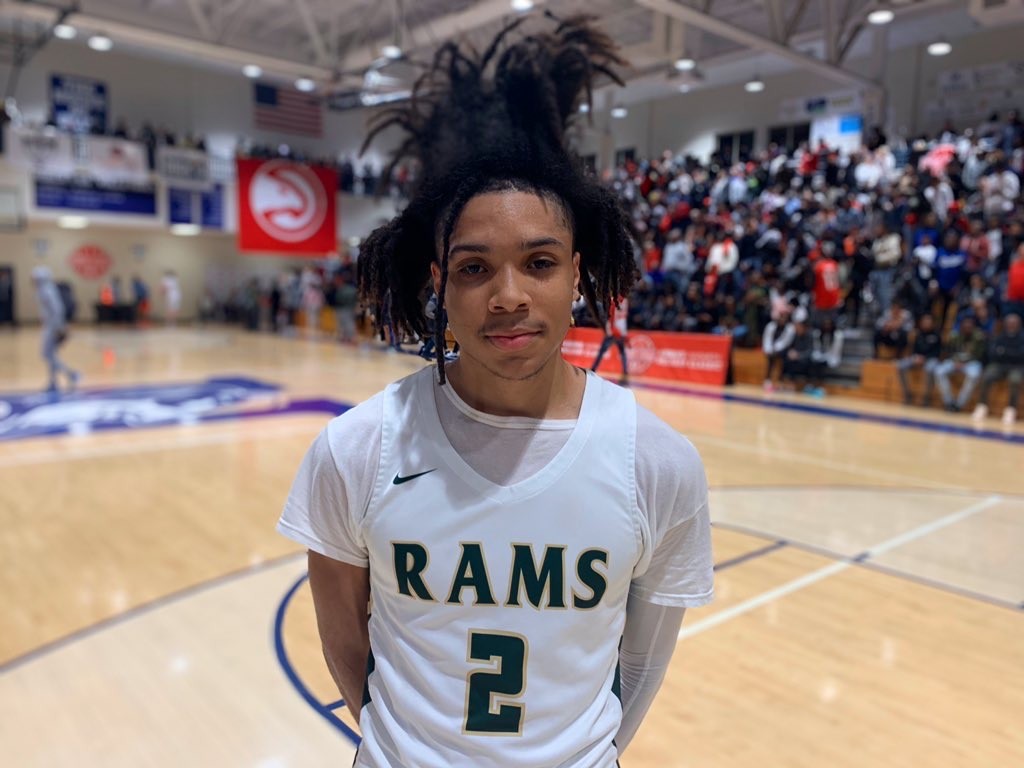 NORCROSS, GEORGIA - The hoop heads of Georgia packed into Norcross High School on Saturday for a loaded day of action at the Hawks Naismith Holiday Classic. For those who found a place to watch a game, they were treated to an excellent state of hoop in the Peach State.

A standing room-only crowd came to see the match-up of the season so far as Grayson and McEachern squared up against each other in a major match-up of Peach State power programs. And it only took a couple of minutes to see just how that story would play out.

Grayson put their foot on the pedal and never touched the brake until the final buzzer sounded.

The Rams won 83-57 over the Indians, snapping the 39-game win streak. And they did it in emphatic fashion. They did it by using their defense to turn the game into a fourth quarter offensive show.

Winthrop-bound Toneari Lane started the action off strong by setting the tone with his perimeter touch. Senior utility man Josh Smith was active on the defensive end of the floor and made his tough-nosed presence felt.

Ian Schieffelin was brilliant in the paint. He shined as a shot-blocker, collecting seven of his 11 in the first half. On offense, he scored 13 points, hit a three and handed out three assists. He also had 10 rebounds to complete his triple double on the day. Just a brilliant effort as the team's big man. More from him HERE.

Caleb Murphy, a South Florida commitment, was brilliant. Just brilliant. He scored 24 points on 10-19 shooting from the floor. His crafty attack-mode mindset allowed him to get into the paint at will and score near the rim time and time again.

Deivon Smith, the longtime leader of the Grayson attack, was equally impressive in the win. The future Mississippi State Bulldog scored 17 points, grabbed nine rebounds, handed out seven assists and blocked a couple of shots. His speed paired with bounce and quickness is just tremendous. He was ready for this match-up but also knew that a win like this means more in the long run as the Rams aim higher. The goal is always the state championship. This game was an important reminder that they are capable of such a quest.

Grayson held likely McDonald’s All-American Sharife Cooper to 6-23 shooting from the floor and 17 points. McEachern could never find their rhythm throughout the game on either side of the ball. Cooper had a flurry in the third quarter, cutting the lead to six points but the Indians could never fully recover.

Quincy Ademokoya, Norcross: With so many things happening on Saturday and so many narratives to follow, it can be easy to not catch everything worth noting. So, take note of this - Let’s not overlook the improvement Ademokoya has made with his game. The Temple bound wing was 7-11 from three en route to 27 points in Norcross’s win over Tucker. This is a major growth area for him and his game.

Terrance Edwards, Jr., Tucker: The senior was in a terrific offensive zone for th Tigers, pumping in 36 points on 14-30 shooting from the floor. Edwards is a wired to score guy and does a fine job of that. Tucker's system has been generous to players like Edwards over the years. He's one of the best available scorers in the Southeast and will certainly be a player widely evaluated throughout the year. From an offensive standpoint, Edwards left an impression in this game despite the loss to Norcross.

Jamal Clyce , Pebblebrook: The 6-foot-6 junior just ate up the midrange space for the Falcons in a game and accounted for 17 of his team’s 27 first half points. Clyce has always impressed with his consistent motor and production as a combo forward. On a team full of talented juniors, Clyce compounds his production with consistency. We caught up with Clyce after his big-time 25-point effort. Watch our interview with him HERE.

Jabari Smith, Sandy Creek: The 6-foot-8 forward didn’t have the best game of his junior season and he’ll tell you that. But what you did see were the flashes of why he’s going to be such a highly recruited player by the powerhouse basketball programs. Duke was in to see him play on Saturday. Smith recently visited Alabama and was out to Georgia. Kentucky recently came down to the school to see him play.

Sometimes when the shot isn't dropping the way you'd like it to, you have to find other ways to make an impact to help your team win. That's what Ohio State-bound wing Eugene Brown, III did in a SW Dekalb win over Discovery. He grabbed a game-high nine rebounds, blocked four shots and shined on the defensive end in a scrappy game against Discovery.

Future Samford wing Luke Champion scored 21 second-half points for Lambert in a tough win over Central Macon. He hit five three-pointers in the victory. Big time effort in the final 16 minutes of action. His offense kept Central Macon at bay in a competitive second half.

Quay Primas, Central Macon: The 6-foot-7 forward scored 32 points and grabbed 10 rebounds in a loss to Lambert. Mercer offered the junior big man a scholarship shortly after the game.

Kowacie Reeves, Jr., a highly-recruited junior guard from Westside Macon is a quick trigger perimeter sniper and was able to get some work done in the corner as a bucket-maker. It’s easy to see why his recruitment is healthy. He has great size and a go-to weapon with his perimeter game.

Pebblebrook sophomore guard Andre Young was outstanding on the defensive end of the floor on Friday night. He played a big role in hold super scorer AJ White of Chattahoochee to 3-16 shooting from the floor and just 12 points.

Buford guard Sebastian Augustave went off in a Friday night win, scoring 33 points and hit 10-16 shots from three. He was an incredible zone thought the game.

Wesleyan’s football team competed in the state championship game on a cold, rainy Friday morning in downtown Atlanta. Hours after the pads were put away for the last time of the year, two-way Micah Smith suited up for the Wolves on the hardwood in the same day.

LT Overton, Milton, 2023: The move-in from Alabama has jumped right into the action for the Eagles and is playpen the role of enforcer. The 6-foot-4 freshman came out strong from the tip and controlled the boards. He finished with 17 rebounds and 14 points in a win over Westside Macon. His football mentality is a major shot int he amp for the Eagles and their young roster.

Kanaan Carlyle, Milton, 2023: With freshmen, you just never know what you’re going to get. Ramp it up to a big stage against key opponents, the energy of youth can rear it’s head. But there were several moments when Carlyle looked quite ready to face expectation head on. He’s going to score. He’s going to shoot. He's going to handle the ball. Those things will be his bread and butter in the years to come. There’s no doubt about that. It was defensive work and desire to guard an elite score that stood out.

Kok Yat, Norcross, 2022: We talk a lot about the great guards in Georgia's 2022 class - and we should because they are great - but we need to talk more about the long term value of Yat. He has as high of a ceiling as anyone in the Peach for the sophomore class. Seriously. In time, it will be fun to watch him and Eastside wing Chauncey Wiggins grow at their games and, hopefully, play against each other in future settings. The class of 2022 in Georgia is loaded.

College coaches from Georgia State and Florida State were on hand on for the action on Friday night. Duke came in to see Jabari Smith play on Saturday. George Mason was in the building on Saturday.