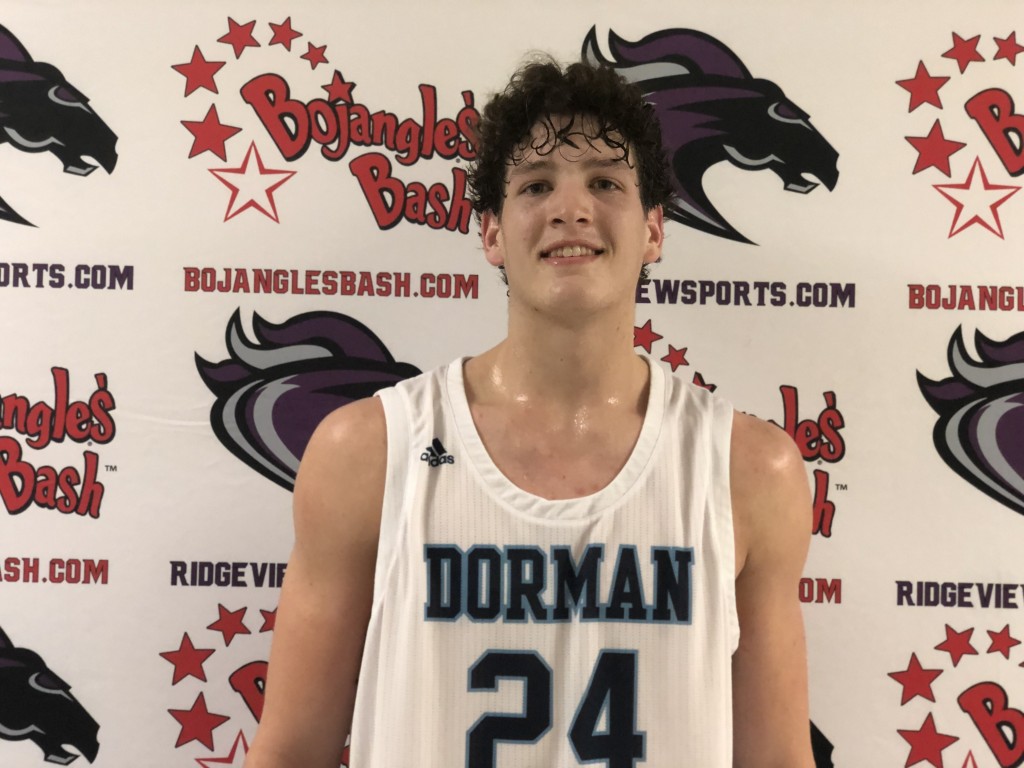 The Bojangles Bash held at Ridge View High School near Columbia, South Carolina tipped-off on Thursday. Some of the top teams in the nation and regionally are represented and our coverage started yesterday with some really good match-ups and some new names to put on our radar.

Led by Butler signee Myles Tate who scored 17 points and pulled down 9 rebounds, Dorman HS (3-1) just outplayed  Huntington Prep (10-1) from the start. Clemson signee PJ Hall got hot in the second half, scoring off three straight dunks and finishing with 12 points and 7 rebounds. Clemson assistant coach Dick Bender was at the game and has a lot to like about his incoming big man.

With a huge size advantage, Huntington Prep had no answer to the athleticism of 6-foot-6 forward Justin Amadi. With a couple of high-flying dunks in transition, Amadi showed the makings of a mid-major college level player based purely off of his athletic ability but coupled with his soft touch around the rim and willingness to guard Huntington Prep's big men, Amadi may have played his way into a couple of scholarship offers. He finished with 13 points and 2 rebounds. Dorman outscored Huntington Prep 32-22 in the paint. Duke-bound forward Jaemyn Brakefield scored 10 points on 4-12 shooting and was held to only two rebounds.

Junior guard Jalen Breazeale was probably the most important player on the floor for Dorman, the lightning quick guard finished with 15 points going 6-12 from the field and 1-3 from three-point land. He also dished out 5 assists and was too quick for anyone on Huntington Prep's roster to stay in front of. His quick hands on defense accounted for 2 of Dorman's 4 steals on the night.

Dorman will take on Ridge View tonight at 7:30.

The 96 points scored by Moravian Prep set the record for the most points scored at The Bojangles Bash. 2020 guard Jamahri Harvey led Moravian Prep in the win over Aspire Academy (KY) with 18 points on 6-9 shooting from the field and 3-5 from beyond the three point line. NC State signee Josh Hall showed his full arsenal in the first half scoring all of his 16 points before halftime. He moves so well without the ball and when he does have the ball it looks effortless with his ability to break down defenders and blow by them. Hall also pulled down 6 rebounds. New addition Amare Haynie was impressive and finished with 17 points, he can affect the game in a variety of ways and causes some problems on defense.

NC State signee Shakeel Moore was productive in his limited minutes, finishing with 12 points, 4 rebounds and 3 assists in only 15 minutes of action. Moravian Prep will take on Orangeville Prep at 4:30 today.

Senior guard Jamarhi Harvey spoke with me following his game and said that a decision could come as early as January. He holds offers from South Carolina State, Hampton, Toledo, NC A&T, Hofstra, Quinnipiac, Robert Morris,  Mt St. Mary's. Elon, Rider, St. Bonaventure, Morehead State, Illinois-Chicago and UMBC. I could see some more schools jumping on board after his performance yesterday. He said he plans on taking at least one more visit before committing.