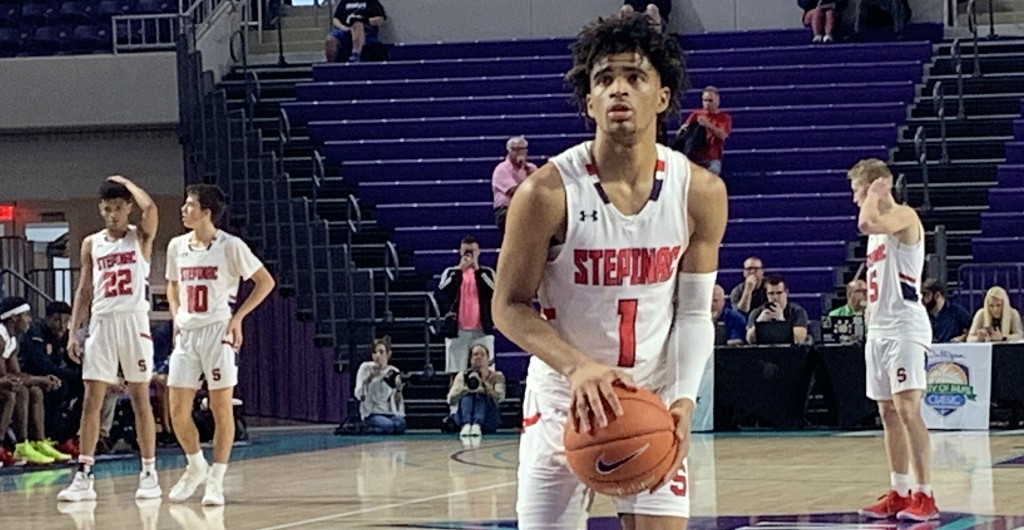 FORT MYERS, FL - The City of Palms tipped off for the 47th year on Wednesday afternoon at the Suncoast Credit Union Arena. Who stood out on the first day of the historic event? Let’s take a look back at the action.

AJ Griffin, Archbishop Stepinac (NY): The future Duke Blue Devil made a big first impression for the hoop heads of Southwest Florida. The 6-foot-7 muscle-bound junior was a problem in the opening game of the event. Griffin stretched the floor with a good-looking perimeter touch (3-6 from three) and finished with 21 points.

RJ Davis, Archbishop Stepinac (NY) pictured above: The North Carolina bound guard can rack up the points and we saw that on the travel circuit. Playing point guard for Archbishop Stepinac, the senior spread the ball around quite well for the Crusaders. His passing to the post was stellar. Davis finished with 22 points and four assists in a big win to start the action off. He paired up well with this guy…

Kennedy Chandler, Briarcrest Christian (TN): The five-star guard did what he does best - he is a heat-seeking missile to iron. As a ball-handler, Chandler is slippery and smart. He can get to spots however he would like. Chandler scored 25 points on 10-120 shooting from the floor. He also grabbed seven rebounds and handed out four assists.

Sharife Cooper, McEachern (GA): If there is one thing that Sharife Cooper does it is this - he wins. He'll find a way when his team needs to chalk up a play or a moment. That's his genius. The future Auburn guard helped pilot his McEachern squad to a perfect record last year. Along that journey, he and his mates won the City of Palms tournament. This year's welcoming gift was a first-round match-up against Philly's Roman Catholic in the opening day nightcap. Cooper stepped up and delivered a 29-point (7-17 FG, 13-18 FT, 2-4 from 3) outing. He never came out of the game. Every minute was needed down the home stretch.

Jalen Duren, Roman Catholic (PA): It is always fun to watch the non-verbal expressions of the crowd when they see a team take to the floor. The City of Palms is no stranger to elite high school talent. And the retirement community that religiously comes out to the annual pre-Christmas tournament know star power when they see if. This year’s no-brainer, first impression stud is Duren. The impressive 6-foot-10 sophomore from Philly is, perhaps, the most impressive attention-grabbing prospect in the field this year. He plays like a modern version of a early 2000s Dwight Howard. That’s a high compliment. Duren was great against McEachern on opening night, posting 21 points on 10-12 shooting from the floor. He also grabbed the 15 most impressive rebounds of the day, eight of which came off the offensive glass.

Jamille Reynolds, Lakewood (FL): The future Central Florida big man held off a constant barrage of Charlotte players and their pursuit to score at the rim. Reynolds wasn’t having it. His big size held off Charlotte just enough to help hold onto a lead. Reynolds scored 18 points, grabbed 11 rebounds and blocked five shots in the win. The college experience will be good for his physical development as a true five man. He has the size and frame to be a unique player in conference play. Furthermore, Reynolds’s presence should allow Isaiah Adams to really thrive as a match-up problem for Johnny Dawkins and staff.

Tre Carroll, Charlotte (FL): As we look ahead to the spring and the summer travel season, don’t be surprised to see Carroll really emerge as a priority guy for a number of schools from various levels. Carroll is a good inside-outside option, as we’ve seen from him at our HoopSeen events. Carroll does a lot of things well and can really challenge a defense. In this setting, he did his best work as a crafty scorer at the rim and from the midrange. Carroll finished with 24 points (7-18 FG) and grabbed eight rebounds.

Javian McCollum, Fort Myers (FL): Playing in front of a home crowd in a good guard match-up contest, the 6-foot-1 point guard made sure his presence was felt. We will have more on his big night and his “breakout” game here in his hometown later. But know this - McCollum put people on notice with his overall game on Wednesday night. Next up: A big game against IMG on Thursday at 6 p.m.

Zion Harmon scored the most points on Wednesday, tallying 36 points on 15-34 shooting from the floor for Marshall County (KY) in an overtime loss to Fort Myers. His nine assists were also a day-high.

Cayden Baker had a big day on Wednesday. The Fort Myers starting five-man helped his team pick up an opening-round win to open the tournament in front of a very pro-Fort Myers crowd. He ripped down a day-high 18 rebounds. Earlier in the day, he signed his National Letter of Intent with North Carolina as an offensive lineman.

Marcellus Brigham, Briarcrest Christian (TN): Jacksonville State is quietly building themselves a lineup that teams should be aware about. The 6-foot-4 slasher from Memphis is a good-looking power wing with toughness en route to the rim. He scored 21 points and grabbed eight rebounds in the game.

Tai’Reon Jospeh, Scotlandsville Magnet (LA): The slasher played particularly well down the stretch in a come-from-behind win against Vashon on Wednesday afternoon. He’s athletic and brave en route to the rim. Joseph finished with 21 points, seven rebounds and three steals in the win. While his shot wasn’t the go-to weapon (5-16 FG), he did get to the foul line and converted there (8-10). Joseph said he holds offers from Stephen F. Austin, Coastal Carolina, Lamar, Southern and Grambling have offered him. He has all five visits left to take.

Kobe Clark, Vashon (MO): The 6-foot-6 wing scored a cool 13 points, grabbed eight rebounds, passed out three assists and he hit three threes in the first 16 minutes of action in what became a disappointing opening round loss to Scotlandville. He finished with 18 points and 14 rebounds in the loss. Clark was the most consistent energy giver for Vashon in the game. He has good size and played good effort throughout the game.

Michigan’s Juwan Howard was the first head coach in the gym on Wednesday to tip off the action. William & Mary had a coach in town for the action, too.