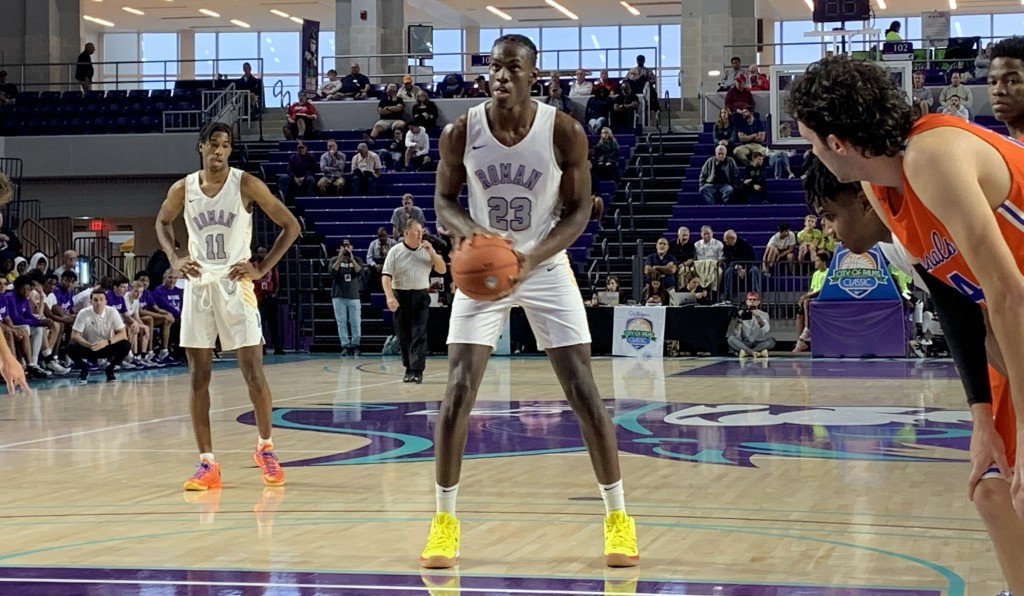 FORT MYERS, FL - Day two of action at the 47th City of Palms Classic was all about powerhouse performances from teams and players. There were a handful of unsigned seniors and some youngsters to pay attention to, too. We look back on the Thursday slate from the COP.

THE BAR HAS BEEN SET

What do you buy the person who has everything for Christmas? That’s kind of what it feels like when you watch IMG and Montverde play in back-to-back games. The Florida powerhouses are stacked deep with college-rich talent. Both teams are huge, unimagined size for the high school ranks.

Both are favorites to win the City of Palms Classic and if the stars align, they will play each other on Monday for the title.

In their opening games on Thursday, each program soared to victories. They were challenged, no doubt, but size paired with talent paired with depth will just wear ya down. No matter your star power.

Who shines on any given night can fluctuate. That’s the beauty and advantage of such teams. You just simply don’t have enough soldiers to combat an army.

Jalen Duren, Roman Catholic (PA): So, what’s new? He’s back again in the Top Dogs section. That sees to be par for the course here for the City of Palms. And, well, for just about any event he plays in. The sophomore is one of the best big men in amateur basketball. Against an undersized Marshall County team, the 6-foot-10 big man bent the rims with ease. He recorded a double-double in the first half with 12 points and 12 rebounds. It was too easy for him. Final stat line read: 19 points, 18 rebounds, five blocks, three steals and three assists.

DJ Steward, Whitney Young (IL): Buckets. Steward is going to get them. And he’ll get them in a variety of ways. The future Duke guard scored 14 first half points for the Dolphins in a game against Riverview. Steward combines toughness, quickness and wow factor at this level. The Cameron Indoor faithful are going to love watching him in Durham. Up to this point in the City of Palms tournament, he’s been the most entertaining player here in Fort Myers from our vantage point.

Eric Dailey, IMG Academy (FL): The sophomore found a good zone on the offensive end of the floor in his team’s win over Fort Myers. He was 8-9 from the floor, including 4-5 from three en route to team high 20-points. He did it just 15 minutes of action. Dailey is a Swiss Army knife kind of offensive weapon and he scored from all three levels. We’re seeing a constant improvement in his game and on this particular night, the Florida native was the go-to guy for the Ascenders.

CamRon Fletcher, Vashon (MO): The Kentucky bound forward had a much better showing on Thursday in a highly competitive win over Briarcrest Christian. Fletcher had a huge block on Kennedy Chandler to help seal the victory in the closing seconds of a back-and-forth contest. Fletcher finished with 21 points on 9-18 shooting from teh floor. He also grabbed 10 rebounds.

Caleb Houston, Montverde (FL): The Canadian stretched the floor in his team’s win over Sanford, hitting four three-pointers in the win en route to his team high 18 points. The 6-foot-8 sophomore forward moved well in the half court and was the beneficiary of a lineup that just knows how to pass and move the ball around to an open shooter.

Another day, another productive outing from Vashon’s Kobe Clark. The 6-foot-5 wing from St. Louis is a productive and tough player that could be a nice addition for a mid-level program as we march towards the late signing period. He said his recruitment is back at square one and open to all comers.

Tyler Beard of Whitney Young (IL) is one of the top available players in the Midwest from the class of 2020. The 6-foot-2 combo guard is tough as nails and good at both backcourt positions on both sides of the ball. Admittedly, Beard said his travel showing slowed down his recruitment and Cleveland State is the only serious player right now. He’s open to schools from all corners. Playing right away is a priority, he said.

Jason Jackson of Sarasota Riverview played his way into the conversion today in a tough loss to Whitney Young. The 6-2 freshman scored 15 impressive points and shot the ball well. We’re looking forward to seeing more from him in the future.

Whitney Young is no stranger to good guard play. The Chicago powerhouse has a freshman to keep tabs on moving forward. Dalen Davis scored 10 points off the bench and played well in the 12 minutes of action he saw. He played with the trademark tenacity that you see from Dolphin players.

Roman Catholic just seems to churn out the players. Year after year. Decade after decade. So, when a young guy makes some plays and you see he’s a freshman, you can’t be that surprised. Freshman guard Xzayvier Brown was really good against Marshall County and passed the rock around and scored in a way that caught your attention.

FIND ME OUTSIDE THE BOX SCORE

Look a little past the box scores and you’ll find some really amazing things with players. Here are the things I liked from the action on Thursday:

Jalen Duren’s vocal leadership. He’s smart, aware and constantly directing traffic on both ends of the floor. The Roman Catholic sophomore center is beyond his years.

Day’Ron Sharpe’s brute strength. The future North Carolina big man doesn’t have many that can match his elite power.

Scottie Barnes owns the touches. He gets his hands on a ball darn near every possession on both sides of the floor. Deflections and passes that lead to assists will be his secret stat stuffer at Florida State.

The sheer size of IMG Academy’s Zach Edey. The 7-foot-3 Canadian is such a unique guy. He’s so intimidating that Fort Myers rarely touched the paint when he was on the defensive end of the floor.