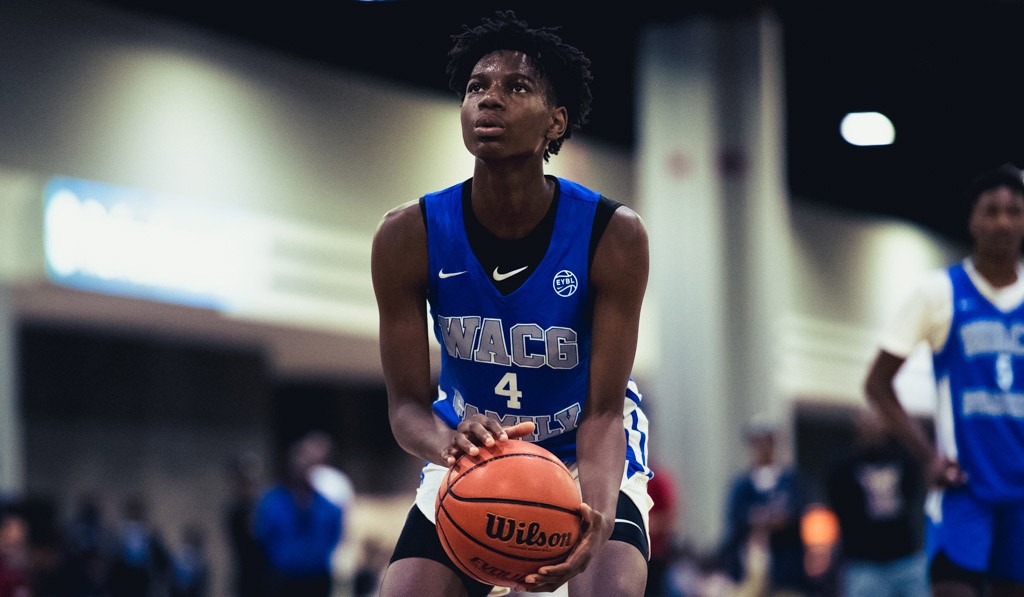 The 11th edition of the Crossroads of the South Exposure Camp was held last weekend. This year’s camp had a nice mix of a solid senior group with a strong underclassman presence.  The chief story from the camp was the strong play of a trio of underclass forwards who all have loads of upside. Not to be outdone, a trio of senior guards represented for the upperclassmen with their strong play on the day.  Meet the standouts.

Carlous Williams, Gulfport (MS) Harrison Central HS, 6-6, PF, 2021: Williams is a load and is very versatile, he really moves well up and down the court, showing solid ball-handling abilities in the open floor, a high riser who is a powerful finisher at the rim and in the paint, and he can also step out and shoot the ball with range. Really a difference-maker and one of the top prospects in the state of Mississippi in the class of 2021.

Devin Ree, Byram (MS) Terry HS, 6-7, F, 2022 (pictured above): Probably the player with the most upside in all the camp, Ree is long and rangy, can shoot the ball with range, is a solid finisher around the rim, has solid handles and glides up and down the floor, and while I wouldn’t call him a strong defender just yet his long arms cause lots of problems for opponents on the defensive end of the court.

Joshua Holman, Canton (MS) Germantown HS, 6-6, F, 2023: Possessing a well developed body already, this freshman was not timid at all when matched against the upperclassmen, he scored the ball in the paint on post-ups and drives, showing a strong dribble-drive game in the half-court, he grabbed rebounds and pushed the ball down the court showing a solid handle in the open court and really hit the boards hard on both ends, an outstanding young prospect with loads of upside.

Treylan Smith, Petal (MS) HS, 6-5, SF, 2020: A strong rangy wing, Smith is at his best playing downhill and attacking the rim, Smith possesses a solid handle and a nice first step and is a strong finisher when he gets to the rim. His jumper is streaky but it is solid enough that opponents have to respect it, an active defender who doesn’t shy away from contact. Coming off of an injury-plagued junior year I’m looking for a big senior year from him.

JaQuevais Tarvin, Brandon (MS) HS, 6-3, SG, 2020: One of the top scorers in the camp, Tarvin is always around the ball and the hoop. He possesses a strong drive and finish game and really shoots the ball well in the mid-range but can also step out and hit the three, also has a strong aptitude for making plays off of the offensive glass, plays with lots of energy and is very active.

Jalin Rice, Madison (MS) Central HS, 6-2, 2020: One of the eye-catchers at the camp, Rice really used the camp to show off his athleticism, a versatile scorer and playmaker he showed he can score attacking the rim, showed off his ability to consistently stroke the deep three and showed that he can facilitate and set up others, was really aggressive all day. He seems primed for a big senior year.

Jeremiah Bembry, Cleveland (MS) Pillow Academy, 6-6, G, 2022: A tall, long-armed guard prospect, Bembry is a newcomer to the state and was a late addition to the camp and offered us our first look at his game.  The son of a college coach, Bembry is a very good ballhandler who shows a strong IQ for the game, he sees the floor and passes the ball well. A shifty driver he finishes well at the rim and possesses a nice euro-step that he puts too good use. Showed quick hands on the defensive end. An interesting prospect who has lots of upside.