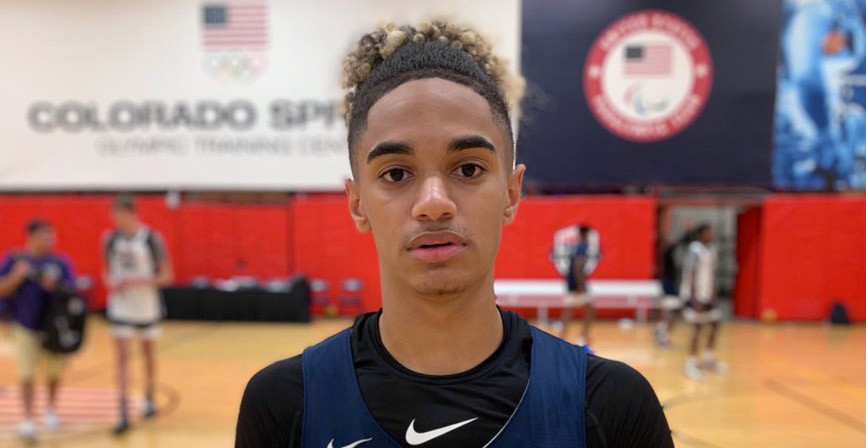 COLORADO SPRINGS, CO - College coaches and pro scouts were allowed into the USA Basketball Men's Junior National Team Minicamp on Saturday. And they came out, that’s for sure. The training sessions were productive and the campers certainly stopped up their game. What did Justin Young like from his second day at the prestigious camp?

I liked the guard play. That’s been the theme so far here at USA Basketball. And the guard play has been terrific. For the second straight day, the top overall players that I saw in action were found in the backcourt.

I liked the gas pedal to the floor play of Indiana’s Khristian Lander (pictured above). His end to end speed was so hard to contain and that allowed him to get to the iron as much as he wanted to. He played in speed throughout the day, whether it was in the extensive drill work or in scrimmage action. Lander is one of the top overall guard prospects in the nation. The 2021 guard currently holds offers from Tennessee, Michigan, Murray State, Ole Miss, Florida, Louisville, Kansas State, Kansas, Iowa, Indiana, Purdue and Illinois.

From a competitive standpoint, no one is doing more to impress than Mater Dei (CA) 2021 PG Devin Askew. The California kid is going right at players here at the minicamp. He’s taking no prisoners and not apologizing for how he is playing either.

On the defensive end of the floor, he was 100 percent dialed in and made things difficult for opposing guards in the scrimmage sessions.

Where does this inner dog come from? Askew gave us a peek into what drives him and how he finds the spirit to beat anyone lined up against him.

I like the feel of Chicago guard Adam Miller. The class of 2020 guard did a nice job of getting open in the halfcourt, running off of screens and got to the quick-trigger corner three-pointer. He has great footwork into his shot and showed some serious smarts in a fast-paced style of play.

I like the control Las Vegas PG Pop Pop Isaac. The class of 2021 lead guard controls the pace of the game with confidence and experience. He did a terrific job of running his club with precision and confidence.

I like the passing touch of Daishen Nix. That’s his calling card and that’s been well-documented. But the way he puts himself into a position to make a good pass is fun to watch play out. He’s quarterback-like. Nix rebounds well for a guard, uses his powerful legs to explode up the floor and gets into the layers of a defense. The kick out pass to a wide-open shooter is a beautiful thing to watch play out.

One of the great things about a stage like the USA Basketball Junior National Team minicamp is watching a player who is on the fringe of a high-major recruitment and taking full advantage of the opportunity to take their game to another level. We may have seen this with Peyton Watson. The class of 2021 guard from Long Beach (CA) Poly told me he holds offers from Long Beach State, Grand Canyon, Montana, San Diego State, Santa Clara, Pepperdine, Utah and Arizona State. He added that he’s heard from USC, Washington, Gonzaga, Maryland and Memphis. He feels like a Pac-12 level player.

The guards certainly dominated the trending topics on Saturday here in Colorado Springs but there were a handful of post players who also shined on this summer stage.

I like everything I’ve seen from Olympia (WA) big man Jackson Grant. This is my first time seeing the 6-foot-9, 205-pound big man from the class of 2021. Grant looks like the kind of big man who had success with Mike Montgomery back in the day at Stanford. He’ll leave here with a nation-wide level of interest.

I like what 2022 big man Jalen Washington is now and I like what he is going to be down the road. The 6-foot-8 post from Gary, Indiana will show a flash that gets you excited about the idea of him as a college post player. He’s only 15 and already has a ridiculous wing span and feel inside the paint.