TOP OVERALL 16U PERFORMERS AT THE 2019 HOOPSEEN BEST OF THE SOUTH, PART II 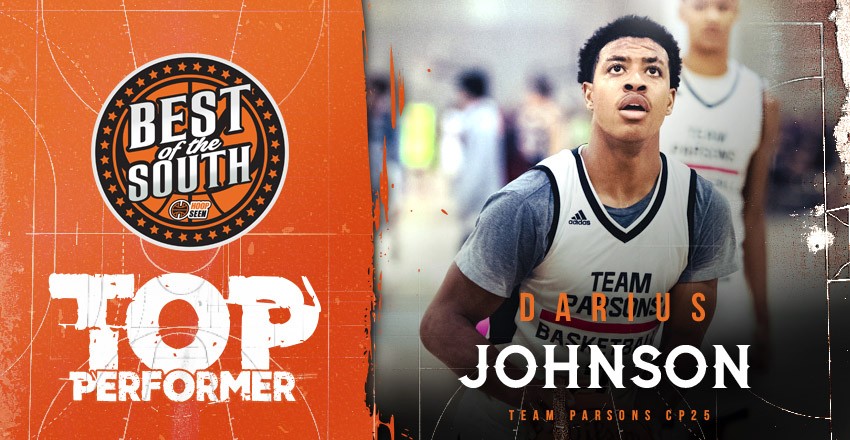 ATLANTA, GA-Every year, the Best of the South is one of the best platforms for underclassmen.This year was no different. We asked our staff about the very best they saw from the 16U division.

Darius Johnson, Team Parsons
Darius is a quiet assassin on the floor. The pace in which he plays commands a certain tempo to the game when he’s running the PG slot. Johnson is great a dishing the rock off the drive, seeing his wings in the corner, & getting them open looks. But if you need him to get a bucket at the rim, he’s more than capable---he welcomes contact. From outside, he’s a sharp-shooter. Johnson is one of, if not THE most, key player on this CP25 2021 squad. - Jerome Reed

Jarmarvious Phillips , MEBO
The 6-foot-4 forward looks the part out on the floor of a guy that is still growing into his frame and could possibly get to the 6-foot-7 range and be a highly recruited player. He has the length and the mobility to cause some problems in the future. He is a productive rebounder that can push the ball on the break. He was a double-double machine this week for the Nike affiliated program. - Justin Byerly

Kam McGee, Wisconsin Sharks
The 6-foot guard was instrumental in leading The Wisconsin Sharks to the Best of the South 16U Blue title. McGee erupted for 18 points in the second half while finishing with 28 points in the semi-final win over St. Louis Blazers. In the championship game on Sunday, McGee scored 15 points.  He can consistently make shots from the outside. His aggressive style of play and willingness to get his teammates involved doesn’t go unnoticed. He is a stat sheet stuffer that scored in double digits in nearly all of his games. - Justin Byerly

Patrick Smith, Team WHBH
This 5’10” PG plays the game with a passion you can immediately see on the court. Smith got off to a hot start in their first game of the tourney, hitting four of his five-total threes in the first half, and finishing with 23 points in that game. Tough defense and hands in his face wouldn’t keep him down, at all. Love the energy, all weekend. - Jerome Reed

Javian McCollum, Team Parsons SWFL
The 6’1” PG was breaking defenses down in every game he played in, this past weekend. Extremely elusive in-transition, McCollum comes right at you & bullies his way to the bucket. He can hit from outside the arc, and does a great job at setting up his big men to score at the rim. Looking for him to have a great junior campaign at Fort Myers High School. - Jerome Reed