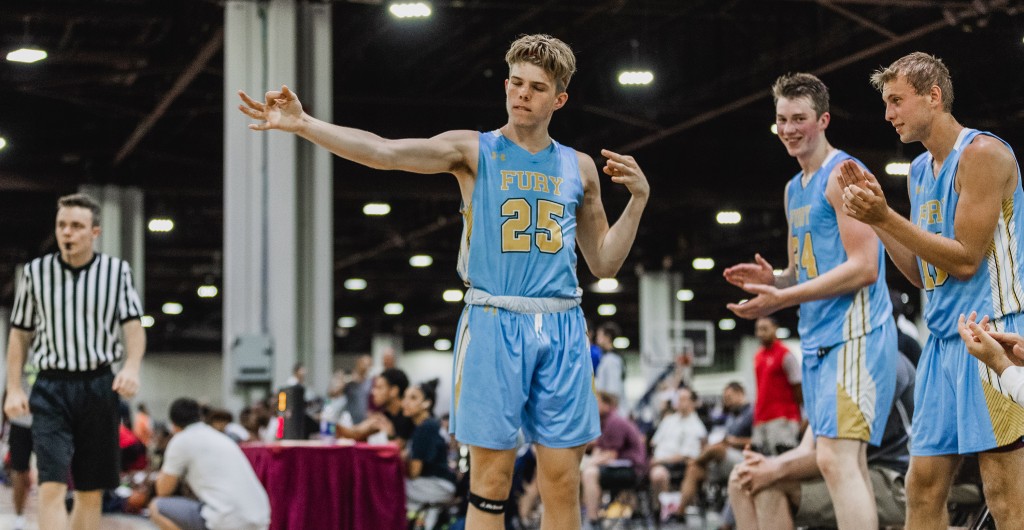 Day Three of the HoopSeen Best of the South did not disappoint as teams and players from various states showed what their area is made of. Check out my Saturday notebook from the games I caught.

John Henry - Minnesota Fury: He played in one of the most seat-filling games of the tournament thus far, and did not disappoint. Against a stout 17U Team Parsons squad, Henry dazzled for 20 points and shot fire from his hands, hitting five treys in the game. Four of them came during the first half. Henry played solid defense on some of Parsons toughest drivers. Definitely should remain a vital piece to the squad, going forth.

Daryl Rice - Atlanta Xpress: Daryl had a breakout day today, leading his squad at the PG position, setting up teammates, while sending in 19 points of his own in a win vs San Antonio Stealth. Rice hit three treys on the day while going 4/4 from the charity stripe. Rice set the tone from the very beginning, bullying his way to the cup for tough lays and opportunities for three-point plays.

Tre Carroll - Team Parsons SWFL: The 2021 prospect was the catalyst to their comeback win vs. Team Speights on Saturday. Eighteen of his 20 points came in the second half, as he became much more assertive in driving the lane & drawing contact. He also went 5/6 from the line in the second half, as a result. Carroll is definitely a pinnacle piece to the Parsons SWFL identity.

Drayton Watson - Upward Stars Upstate-Watson: He plays at the same high school that Zion Williamson attended, so it’s no wonder he came up big for the Stars on Saturday. The 2021 PG notched 20 points in the win over God’s Property, and drilled four treys in the process. What was key about Watson, was his on-court demeanor. No plays off. Hustle non-stop.

Samarion Grant - MEBO Team Hood 15U: Standing at only 5’9”, Grant used his height to an advantage as he was able to knife through defenses and get to the rim, with ease. He has great awareness in-transition, and albeit smaller, still welcomes contact when met at the rim. He knocked down three treys in the win vs. Upward Stars 15U.

Jordan Sears - Team Parsons 17U: This 2020 point guard is one of the quickest in the tournament with the ball in his hands. He notched 19 of his 21 points in the second half during a close loss to the Minnesota Fury. Sears is an awesome on-ball defender, rarely gets thwarted by screens. Welcomes all contact when headed to the rim, and will finish more often than not.

Josh Smith - Atlanta Xpress: This senior is someone that should be on the radar of some teams at the next level. He put up 16 points in the win vs San Antonio Stealth. On offense, he’s not afraid to get in the mix and snag offensive rebounds. On defense, he’s crafty with his hands—solid at poking the ball away & stripping the rock for steals.

Cooper Dolhancyk - Atlanta Xpress: Coop can flat out put it in the hoop. The 6’4” forward knocked down 19 points en-route to a win, and hit three treys along the way. He’s a solid rebounder on both ends, can also hit that 15-18 foot midrange jumper without hesitation.

Marshaun West - Rock United Commanders: West is a highflier who lives in the midrange/paint area. Although he’s not a “big” man standing at 6’4”, he can get within 10 feet of the basket and really pick defenders, apart. He scored 19 points in a win vs. the Cincinnati Royals. West should definitely be a guy that earns an offer by the end of his last season.

Kyle Feldman - Jupiter Jaguars: Flat out, the kid just plays EXTREMELY hard. His motor is higher than those with double his skill-set. Feldman earned 14 points in a win over Team AWAIT, and did so by continuously attacking the rim, getting and ones, and finishing at the free-throw line. Jupiter Community High has a leader on the floor in Feldman.

Isiah Morgan - Team AWAIT: Love the energy he brought to his squad during the loss vs. the Jupiter Jaguars. He’s a guy that can score in a variety of ways, and demonstrated that by scoring 11 of his 15 points in the first half. He sank three treys, in the process. He can get to the rim on his own terms, and is a solid rebounder, as well. Morgan would definitely be an asset at the next level.

Jaden Brown - Team AWAIT: Brown has that raw power that can be molded into something special. He finished with a tough 11 points, but got them by showing patience and knowing when to attack the basket. On defense, he’s great at timing out when to shoot passing gaps, get a steal, and race for the slam. Another guy who should be considered for a roster spot at the next level, somewhere.

Jabarie Robinson - Team MEBO 15U: The 2022 Mississippi guard did a great job at getting into the paint and finding the open man for for quick assists. He doesn’t bite on the pump fake, showed a lot of discipline, today. If you try to drive, his 5’11” self can block your shot, easily. He finished his Team MEBO win vs. Upward Stars with 15 points.

Dessie Canty Jr. - Upward Stars Upstate-Watson: This 6’4”, 2021 guard pitched in 13 points to go towards their win vs. God’s Property. He hit three treys along the way. I liked his overall pace throughout the game, just not a guy that looks to force it. Should develop really well over the next couple of seasons.

Randy Johnson - PSB Elite-McCarthy: This is the only guy in this notebook that didn’t hit double-digits in points, but it did not matter—EVERYTHING else made up for it. More than anything, I loved the way he talked on defense, consistently. That’s somewhat of a lost art, today. He rebounded well, can facilitate the transition offense, successfully. Johnson can even give you a dunk off a simple hop-step, showing his explosiveness. Like him.