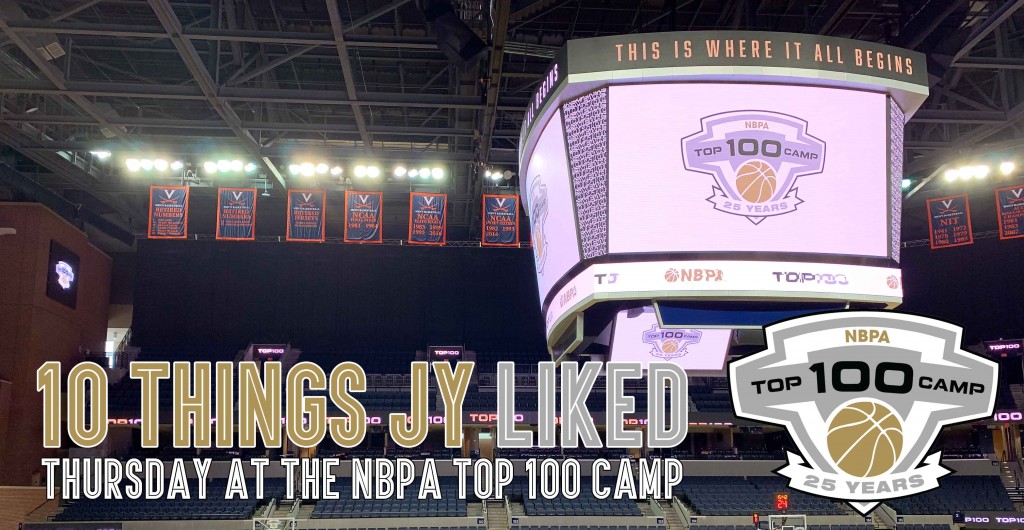 CHARLOTTESVILLE, VA - Thursday at the NBPA Top 100 camp provided college coaches and NBA scouts plenty to think about. With games going from the afternoon right to the tip of Game 6 of the NBA Finals, the day was jam-packed full of hoops. Here is what Justin Young liked from the action.

I liked everything Jabri Abdur-Rahim did on Thursday. He’s been the most impressive scorer I’ve seen at the camp. Everything he does is effortless and effective. There seems to be an alpha dog mentality to his approach to the camp.

Big man Efton Reid, a 7-footer from Virginia, has been an eye-catcher here. The class of 2021 caught the attention of a number of NBA guys in the building. He’s a high percentage scorer in the paint and even takes his game out to the three-point line. I’ve been very impressed with the big man in this setting.

I like the first step of Xavier commit Dwon Odom. His explosive move was one of the hardest to guard at the camp. Odom has consistently been one of the most productive guards in the entire camp. Odom continues to play at a high level. He’s been dominant in the Peach State.

I liked the offensive versatility of big man Dawson Garcia. The 6-foot-10 big man has been one of the best big men out to the three-point line for the last two days of action. It’s easy to see why his recruitment is in the priority zone for Big Ten schools. The Minnesota forward has the goods to be a multi-year starter in college.

I like everything 2020 guard Hassan Diarra has done this week here at the camp. The 6-3 guard from New York is doing everything you want a guard to do. He’s a terrific passer, terrific defender and terrific end-to-end speed guy.

I like the way Class of 2021 WF Dontrez Styles has made the most of his moments. The 6-foot-7 junior is a great athletic slasher who can rebound, showed he can knock down the baseline jumper. He’s been a consistent scorer here at the camp.

I like the way Marjon Beauchamp just goes out there and gets buckets. The Seattle native has been a straight up point producer here in Charlottesville. He's been on point from three, attacking the rim with purpose and challenging anyone to stop him.

I like the tough guy play of North Carolina bound big man Day’Ron Sharpe. He wants people to try and challenge him inside the paint. No one has been able to temper his production. He’s the ultra-tough guy.

I like Trey Patterson. It’s just that simple. The New Jersey forward scored from all spots on the floor and seemed to get better as the day moved on. The class of 2021 prospect has been on one of the top juniors I’ve seen here at the camp.

I like the footwork of Oak Hill big man Dylan Cardwell. He's a crafty dude in the paint and quite nimble as he works his way around for point-blank buckets and rebounds. He's been really impressive this spring and early summer.