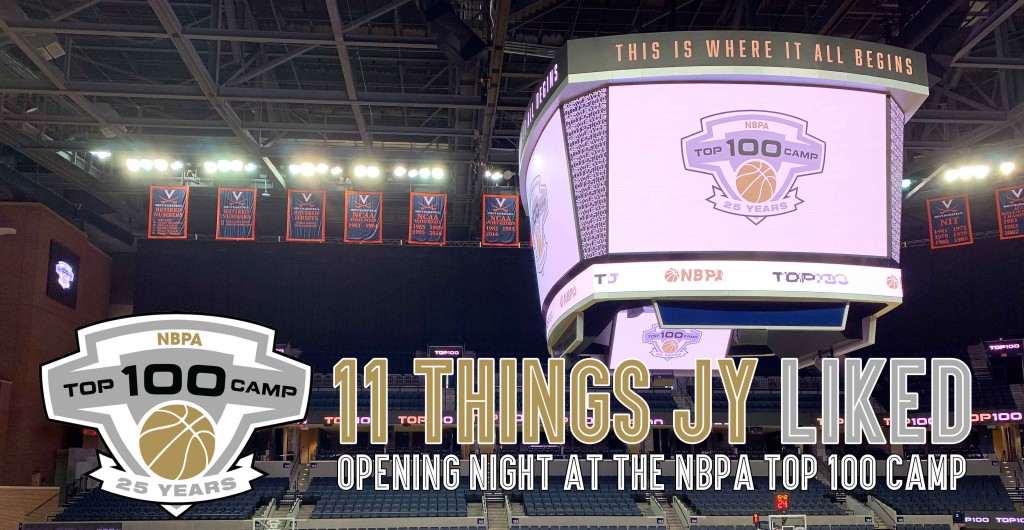 CHARLOTTESVILLE, VA - The first day of action of the 2019 NBPA Top 100 camp is in the books. There was plenty to like as the players dove into game action. I roll out 11 things I liked from my view on the baseline.

I liked everything big man Mady Sissoko of Wasatch Academy (UT) did. Everything. He played a grown man’s game and didn’t wait for the competition to catch up. His hands are big and strong and vice-grip like. Sissoko ran the floor, scored in transition, stole the drive of the competition with some grown man rebounds and blocked shots.

I liked the way 2020 Jabri Abdur-Rahim of Blair Academy (NJ) shot the rock on opening night. He scored at all three levels and played like a guy who packed extra confidence in his travel bag. Great start for the 6-foot-7 wing.

I liked the way Las Vegas guard Daishen Nix passed the rock. The five-star from the class of 2020 can really move the ball around to the right spot at the right time.

I liked the way Micah Peavy played in the opening game. I absolutely love his size and his ability to be a mismatch at several positions. He has finishing moves to the basket. His confidence is high and he is an astute ball-handler with great NBA size and length. Peavy works well on the offensive glass. He sees the floor well and can move the ball to shooter's spots. Great start for the Texan.

I liked the way Brandon Boston attacked the rim. The Georgia native was very aggressive as a rim-attacker. The five-star guard was one of the best players when it came to getting to the rim. HIs aggressiveness set the tone for what kind of week he could have here in Virginia.

I liked the way Louisiana PG Jalen Cook handled the rock and challenged defenders to guard him. He was crafty in every sense of the word. Shifty was the best way to describe his play.

I liked the way Tennessee guard Keon Johnson always plays here at the NBPA Top 100 camp. He’s been on a tear this spring. Virginia is one of his finalists in his recruitment and playing at John Paul Jones Arena seems to always bring out the best parts of his game.

I like the steal of a prospect Houston has in Tramon Mark. The Texan was one of the best guards I saw on opening night. He was always in a position to make a play.

I like the way Matthew Cleveland played on this stage. The No. 2 overall player from Georgia’s 2021 class is playing on the biggest stage of his young career and he came out with an attack-mode mindset. There was no holding back his aggressiveness. That was good to see him start like that.

I liked the way 2021 big man Moussa Diabate from Florida started his camp. He didn’t waste time trying to ease his way into the action. He started with a bang. Then a block. Then a big rebound. Then more interior production. Diabate set a tone for himself with great energy.

I liked the way Joe Bamisile played at the rim. The Northwestern-bound guard attacked the rim with great fervor and purpose. The Team Parsons guard had some of the best highlights of opening night.