Big time players shine on Tuesday at the Nike Elite 100 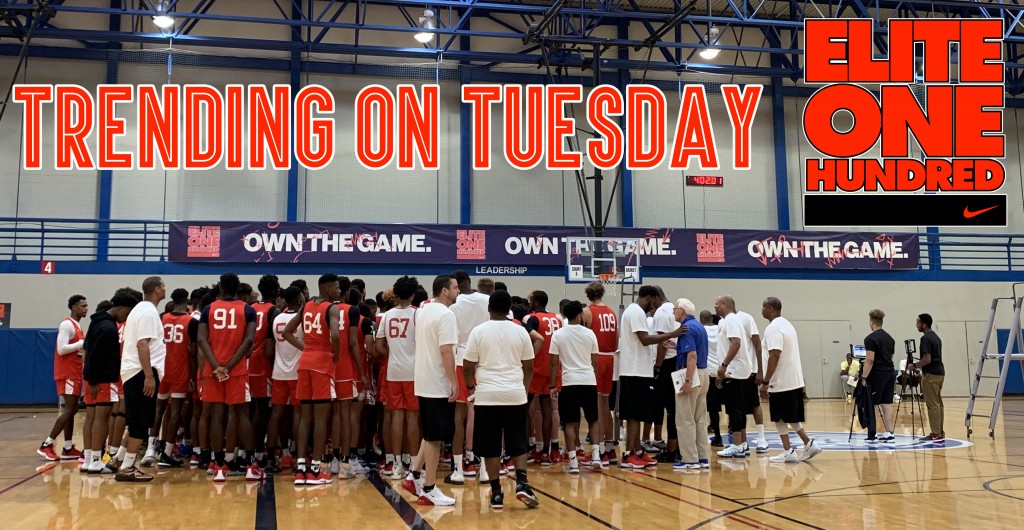 ST. LOUIS, MO - The 2019 Nike Elite 100 welcomed NBA scouts into the event for first time in the storied history of the stage. The camp is primed with players from the classes of 2021 and 2022. As the possibility of high school players going straight to the NBA grows stronger and stronger, the decision-makers at the highest level of basketball in the world had a chance to get a glimpse into the future on Tuesday.

THE EMONI BATES ERA IS HERE

I’ve not had a two-decade career as a hyperbole writer. That’s not my game. So, when you read the next line, I mean it. I believe in it.

The first two plays Emoni Bates came onto the floor here at the Nike Elite 100 camp, he looked like Kevin Durant. And Bates may be better at the same age than the guy that the world knows as KD, an undeniable top three talent on planet Earth.

Bates is the definitive class of 2022 No. 1 prospect. When he arrived at St. Louis University, he stepped on the floor and immediately began to play like one of the premier amateur players in all the land. NBA scouts are allowed at the Nike Elite 100 for the first time in the storied history of the event.

With high school players likely to be eligible for the 2022 draft, Bates will certainly be a highly sought after player here for the scouts to see. He could be a player intriguing enough to dap up Adam Silver on a June night in the near future. The scouts and decision-makers want to see him in action and up close and personal.

There was a stretch of action where Bates was on a different planet compared to the rest of the field. He had back-to-back three-pointers. Then he Bates made a ridiculous left-handed zip pass to a teammate, who truth be told just wasn’t ready for such an elite pass. The play ended in a turnover. That’s not the point. The pass, man, the pass…

Bates showed a total package of talent in a small amount of time. If the Tuesday afternoon teaser was what we are to expect from the young man from Ypsilanti, Michigan then we are in for an exciting, and potentially epic week.

With NBA scouts in attendance, Jonathan Kuminga went right to work and played like a guy wanting to leave an impression. The powerful and explosive wing forward from New York’s Our Savior New American really shined with his amazing first step and burst to the basket. The 6-foot-7 prospect from the class of 2021 is on the short list of candidates for the No. 1 overall spot. With pro teams watching, he shined on the big stage, played like a man, makes NBA style athletic plays.

Chris Livingston is having a terrific summer. The MVP of the U16 FIBA Americas tournament continues to shine as a shot-making perimeter threat. The Akron, Ohio native started the camp off strong with his play, knocking down jumpers from the wing. He scored off of good-looking pull-up jumpers with good distance on his shot. Coming off his role on the gold-medal winning team in Brazil, a number of NBA teams on hand want to see the class of 2022 prospect in action this week.

After his MVP performance at the NBPA Top 100 camp, Seattle area big man Paolo Banchero came to St. Louis with a surge of production. The 6-foot-9 class of 2021 forward continued to show off his elite skill set for his position. Banchero is a complete player inside and out and does a terrific job of finding the spots on the floor to produce. He’s every bit at top five player in the junior class and continues to push for the overall top spot in the class.

You’re going to have a hard time finding a more unique player at the Nike Elite 100 outside of Minnesota big man Chet Holmgren. He is one of the most unique players in the camp. His three-point shoot is pretty from deep. Then on the next possession, he can straight to the paint and shine as an elite shot-blocker.

Of all of the point guards in the camp, Memphis’s Kennedy Chandler could finish the week as the top dog at his position here in St. Louis. He’s a smooth and confident floor guy who runs the pick and roll efficiently. He can turn defenders around with his skill and ball-handling. What a passer he is. Offensively, he’s also ready to get buckets on a quick notice.

The camp is loaded with studs this season. And because of that, the level of play seemed to be elevated. On the flip side, there were a number of players who didn’t care how bright the stars shined. These guys made sure their names were known and recognized when everyone goes home from camp.

Micawber Etienne, a 6-foot-9, 225-pound center from Suffield Academy (CT) was the best motor man I saw on Tuesday night. He dominated his space with a motor that just never turned off. Etienne played so very well in the paint on both sides of the floor. His motor never turned off and he shined as a paint scorer. His toughness is hard not to like and his energy was infectious.

St. Vincent St. Mary (OH) wing Malaki Branham was a wow guy on Tuesday. He rebounded well in traffic, was a smooth rim attacker, he hit three-pointers and pull up jumpers all the while being an explosive and smooth offensive threat. Defensively, Branham was ready for any challenge and was one of the best 2021 performers I saw on Tuesday night.

San Diego (CA) 2022 PG DJ Dudley was a standout on Tuesday. His floater game was on fire, scoring multiple times with hard drives to the rim and dropping buckets over long, over-stretched arms of the defense. He turned defense into offense, too. Never afraid to attack the rim, Dudley shined as a paint scorer and passer. Really good first impression from the 6-foot-1 guard.

Dallan Coleman was in shot-making mode on Tuesday afternoon. The class of 2021 Floridian was dialed in from three and rarely missed a perimeter shot. The 6-foot-4 guard from West Nassau HS continued his three-point barrage that I saw from him a couple of weeks ago at Georgia Tech’s team camp.

There has been a great buzz out of Alabama about 2022 wing Barry Dunning for quite a while now. On Tuesday night, he quietly and efficiently shined. His two dribble pull-up was a weapon. When he gets into the paint and he can score inside. Dunning is always moving, rebounds in traffic and can handle the ball. It’s easy to see why he’s quickly climbing the charts and has the game that goes with a top-shelf prospect in the South.