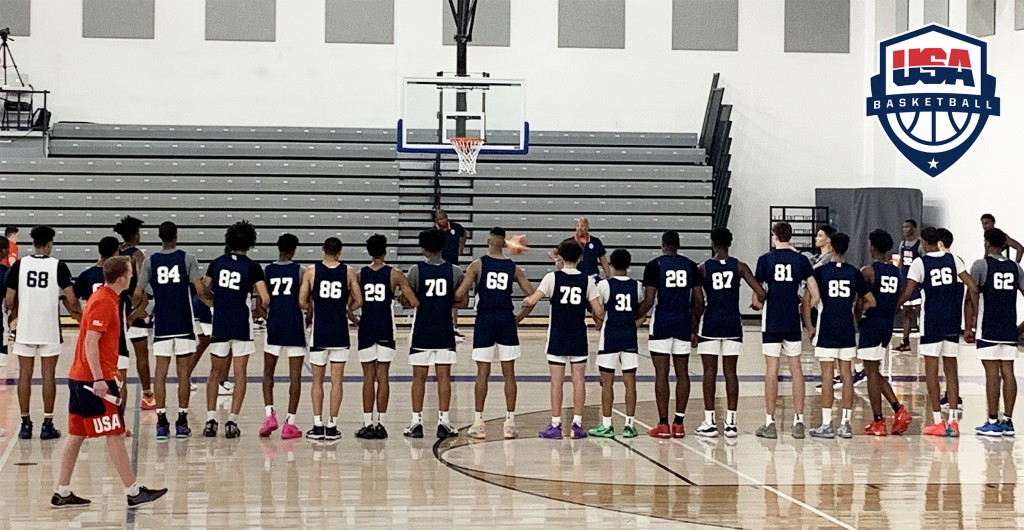 FORT LAUDERDALE, FL - Thirty of the top American players from the classes of 2021 and 2022 made their way to South Florida for an aggressive USA Basketball Training camp. The goal was to compete for a spot on the 12-man roster that will move on and compete in the FIBA U16 Americas Championship in Brazil.

Earning a spot on this roster was no easy task. The competition was intense throughout the three days HoopSeen was on the sidelines. Here is a look at our superlatives from the camp.

Best wow factor: Jabari Smith, 2021, Sandy Creek (GA) HS
The Atlanta native continues to trend upward in his overall skill development. The rise has been impressive to watch play out and on this stage, Smith made plays that very few could do. In scrimmage play, Smith made the most impressive NBA level moves and finishing plays. Defensively, he used his length for rebounds and blocked shots. After three days of action, Smith was the most impressive as a match-up problem. His pull-up three-pointer stretched out to NBA range. Long term, Smith was the most impressive prospect in Fort Lauderdale. He looked like a guy who should be considered for a top 10 ranking the class of 2021 nationally.

Best big man: Jalen Duren, 2021, Roman Catholic (PA) HS
Duren catches your attention the minute you walk into the gym. The 6-foot-9 manchild from Philadelphia is an imposing but graceful giant teenager. He’s becoming a veteran of this USA Basketball thing. And you can see his mature approach to the game take hold of the teaching and grow his game. There is Duren and then there is the rest of the pack when it comes to big men here at the U16 Training Camp. Duren is one of the best big men in American high school hoops. He continues to prove that opinion.

Mr. Game Speed: William Jeffers, 2021, McDowell (PA) HS
In this type of setting with high-level players all competing for a one in three chance to make the roster, the effort has to come every minute you are on the floor. Will Jeffress gets this. The big wing from Erie, PA operated in game speed in every drill and in every competition. He wanted to be there and wanted to earn his spot.

Best defender: Amari Bailey, 2021, Sierra Canyon (CA) HS
From end to end, Bailey wanted to deny, deny, deny. The California kid was pesky as all get out as a defender all week long. He was the best perimeter defender in the camp and never let up in that distinction. Bailey earned his way through the first cut and because of his willingness to guard end to end, he could potentially move on to Brazil.

Best passer: Dug McDaniel, 2022, Paul VI (VA) HS
The smallest guy in the camp was the best passer on the floor. He’s carved out a niche for himself as a dynamic passer and knows how to glue great talent together. McDaniel protected the ball and made the right pass at the right time at all times. That narrative will continue on with him at every step of his budding basketball career.

Mr. All-Around: Max Christie, 2021, Rolling Meadows (IL) HS
The 6-foot-5 guard focused on the positive of the day and then maximized it. If he was the best passer in his drill work, then he owned that. If his leadership and energy was needed in the stations, he shined in that space. When his shot wasn’t falling, he became a facilitator. Christie has a maturity and work ethic to his approach that reminds me a lot of All-American and future Florida Gator Scottie Lewis.

Mr. Tough Guy: Jarace Walker, 2021, IMG Academy (FL)
No one owned the enforcer role quite like Walker did. The 6-foot-6, 230-pound forward didn’t shy away from playing physical and playing tough at all spots on the floor. His approach is fun to watch. Walker wasn’t going to take anything from anyone. The New Freedom, PA native was active on defense and got better each and every day. Walker was the no-brainer intimidator.

Hi, my name is…: Camden Heide, 2022, Wayzata (MN) HS
Playing in his first USA Basketball experience, the 6-foot-5 guard made sure he made the most of it. His footwork to made shots was a thing of beauty. He was actively engaged in all of the drill work, communicated in every category, shot well and took the drill work seriously. He firmly supplanted him as one of the coach favorites during the week of work.