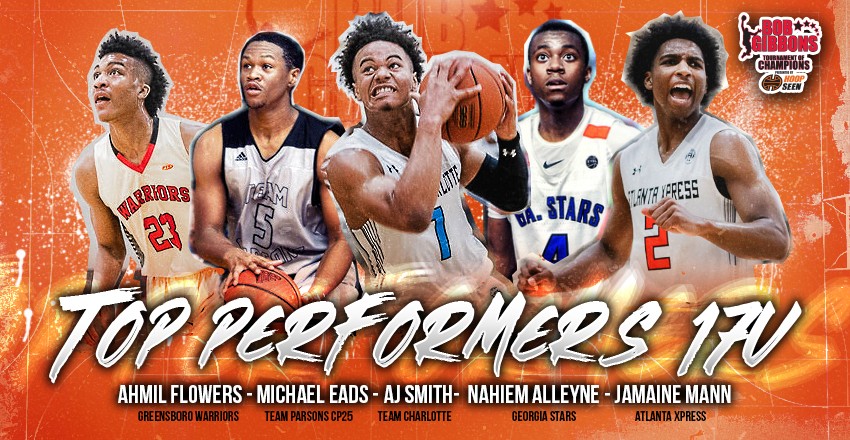 The Bob Gibbons Tournament of Champions is in the books and our staff had plenty to take in. After a night of discussion and debate, these five players were some of our top overall performers in our 17 and under division of the event.

Nahiem Allenye, Georgia Stars
It has been a terrific spring for the Mountain View (GA) High School guard. Allenye is the most consistent scorer on the Stars roster and on this particular stage, we saw the continued growth and development of his overall skill set on the offensive end of the floor. When he gets 15 feet and in, he’s an automatic score. Allenye does a tremendous job at getting to the foul line and converting there. Defensively, he’s strong enough to defend all perimeter positions.  - Justin Young

Michael Eads, Team Parsons CP25
Team Parsons is loaded with talent and the balance of prospects has allowed them to be in a position to have success all travel season long. Eads is a perfect example of this. He finds a way, whatever the role may be. He shined as a score, as a rebounder, as a passer, and as a defender. While he may not look like the like the explosive player on the floor, Eads will find a way to make a play at the rim that surprises you and catches you off guard. He’s consistently produced this season and at the Bob Gibbons Tournament of Champions, that production helped his team make it to the championship game. - Justin Young

Ahmil Flowers, Greensboro Warriors
Flowers came into the event with a Colonial and Southern Conference offer. Heading into July, Flowers has to be a must-see for college coaches at the mid-major level. He stands 6-foot-5 and can really get going from three. His ability to facilitate in the half-court and be a defensive stopper on the other end is intriguing. He is built around an athletic frame with long arms that cause problems on defense and are useful when attacking the rim. He has been getting some interest lately from some Sun Belt and more Southern Conference teams. - Justin Byerly

Jamaine Mann, Atlanta Xpress
Game after game, there wasn’t a more productive player from the Atlanta Xpress than Jamaine Mann. The stout, 6-foot-4 forward was consistent scoring the basketball each game, highlighted by his 23 and 25-point performances on Saturday. He used his strength and physicality to his advantage each game by embracing contact. Mann was constantly making trips to the free-throw line, too. I thought he helped his stock as much as anyone this weekend. - Tai Young

A.J. Smith, Team Charlotte
Murray State incoming freshman Chico Carter went through it last year at Bob Gibbons TOC, taking the brunt of a Team Charlotte Head Coach Jeff McInnis’ chewing out that most kids would take a seat at the bench demanding their parents send them to another team. 2021 point guard AJ Smith was this year’s version. Early in the first half yesterday McInnis laid into Smith who took the words from his former NBA player head coach and responded. Smith would get into the paint at will over the weekend either scoring or spending the time at the foul line. I love his toughness and will to compete. He has good size at 6-foot-4 for the point guard spot, he thrives at breaking down the defense and driving the lane towards the rim. He tells me he has been hearing the most from Temple, Clemson and Charlotte. His offers so far are Charlotte and Hampton. - Justin Byerly