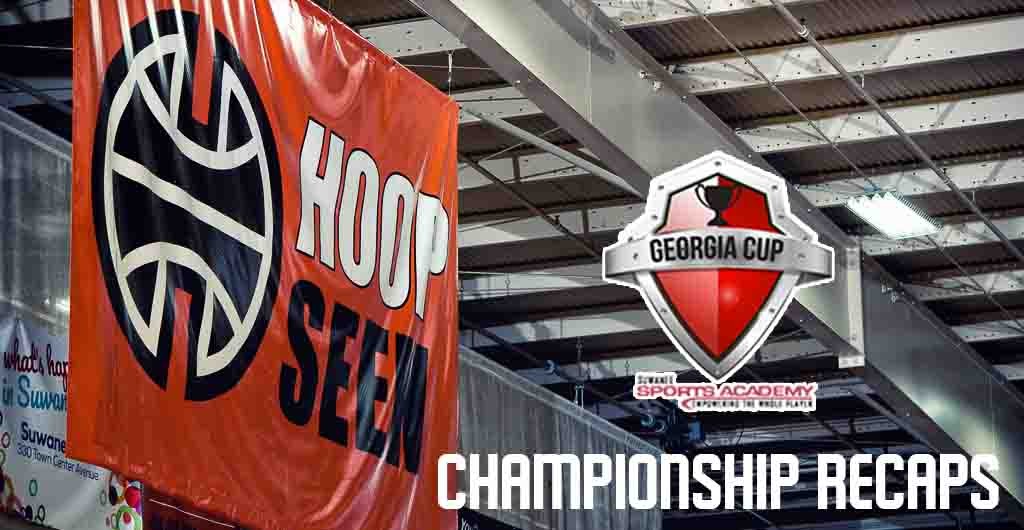 Dream Elite (Teal) beat the Atlanta Timberwolves 91-89 to win the 17 and under division of the Georgia Cup IV tournament on Sunday.

Xavier Davis led Dream Elite dominated the game with 41 points scoring from all over the place beating players of the dribble, hitting three point shots, getting the foul line numerous times and ultimately hitting the game winning floater with 2 seconds left in overtime. Cleophus Smith also added 15 points from some great transition plays and drives inside.

Atlanta TapOut Black beat the Warner Robins All-Stars 74-40 to win the 16 and under division of the Georgia Cup IV tournament on Sunday.

Jusaun Holt led Atlanta TapOut Black with 22 points from all over the court and excelled at getting to the basket throughout the game. Gabe Carter also added 14 points, making four three-point baskets himself. Atlanta TapOut come out strong jumping out to a 41-23 lead by halftime and refused to take their foot off the gas as the game continued.

Five Star Basketball held off a late-game run by Junior Flight to win the 15U division championship game.

Ashton Blackwell put up ten first-half points for Five Star Basketball, helping them to a 28-22 lead at the break. Ryan Holder handled the majority of the first half scoring for Junior Flight, tallying 12 points.

Junior Flight wasn’t able to make much headway in the third quarter, finishing the period still down 12 points. Marcus Whitlock and Ryan Holder would catch fire from beyond the arc to bring Junior Flight to within five points midway through the fourth quarter.

But a huge 13-point fourth quarter from Blackwell would seal the deal for Five Star. Blackwell would finish with 23 while Chandler Jackson also had a solid offensive performance with 21 points. Whitlock ended the game with 19 points and Ryan Holder finished with 26 in the loss for Junior Flight.

The two teams that went against each other in the 14U Championship Game were Bainbridge Shockers and GSW Elite, Bainbridge had size on GSW which ultimately led them to the victory in Georgia Cup IV. Bainbridge came out on top 55-36.

It was a tough game to win, but Bainbridge showed they are the better team with the big win.

The Shockers took down SBC on Friday, Young Bulls and Dream Elite on Saturday and on Sunday they took on AOA and MTXE to advance to the Championship game to the match-up against GSW Elite. They had a tough schedule this weekend, but they were resilient and that showed in the championship game.

Every player on Bainbridge produced for the Shockers. The leading scorer was Adyn Grant, Grant scored 12 points for the shockers. Most of his points came from getting to the basket, which he excelled at. The young guard proved himself to be one of the better players in his age group.

Kelvin Cochran contributed nine points, the big man was a terror in the paint and hit a three pointer to help take charge over the Warriors. Cochran was injured in the first half of play but was able to come back and give the Shockers good minutes. Before his injury, the Shockers played their offense exclusively through him. Ahmari Borden also scored nine points and is a great pick and roll player. Other players like Amarion Ford, Kerdrick Bryant and Jafus Ferguson are really good role players for the Shockers. Ford plays with a chip on his shoulder, Bryant has a high basketball IQ and Ferguson is well-developed for his age.

Auliyus Dozier for the Warriors has been a problem for opponents the entire weekend averaging almost 15 points per game on the weekend. Dozier scored 13 in the loss. He is the heart of the team, when he isn’t in the game the Warriors have problems getting the offense ran. Daniel S. for the Warriors scored nine points in the loss. Daniel is a quick guard with extremely quick handles, he knows exactly where his teammates will be and when to hit them.

The Georgia Bison’s size and speed proved to be too much for the Atlanta Nets and they went on to win the 13U division championship game.

They took control of the game from the jump, finishing the first quarter with a 17-11 lead. The Bisons stretched their lead to 27 points before heading into the half. The Nets got a big third quarter from Braeden Lue, and a three from Jordan Jones brought them within five. The Bisons came out on fire in the fourth, putting up 27 total points.

Jalen Lee and Makari Bodiford both finished with 14 points in the win for the Bisons. Braedan Lue had 21 in the loss.

Both of the teams that played for the 12U title game today have proven themselves to be the top teams in their age group here at the Georgia Cup IV. Only one team came out on top and that was Dream Elite Orange.

Chris Cherry scored 21 points in the championship game. Cherry’s decision-making is what set him apart from other players in his age group. At 12 years old he is a true leader of his team and knows what he’s doing with the ball. Cherry scored on every level and can do it consistently. Cherry is a threat driving to the basket, from the midrange and beyond the arc. Cherry shares the ball extremely well for his age, his IQ is incredible. He also has a strong presence on defense, pestering his opponents and has a knack for stripping the ball.

Chris Bozeman is another great player for Dream Elite, he scored 17 points and had a field day beyond the arc. Bozeman is a top player in his age group. Marqule Patterson had seven points, Kaleb Bradley had six, and Terrance Brown had four.

Nick Woodford scored 16 points for Macon Mavs in the championship loss. Woodford is an oversized guard and is a great player for his team and has shown that over this entire weekend. He too can score on every level. Jamal Lawrence scored 10 points, Chase Hargrove tacked on seven and both Jalen Whitley and James Neville Jr had three.

Both teams were really good, and they knew it. They both played tough and were scrappy throughout the four quarters of play. In the end, the best team won and they deserved the right to hold the gold trophy at the end of the night.

Triple Double jumped out to a 16-0 lead to open the game before Arie Benjamin would score the first points of the game for D-Elite. Benjamin and his teammates would cut the lead to ten with just over three minutes left in the first half. Walraven handled the bulk of the scoring for TD in half one, putting up thirteen of his fifteen points before the break.

Triple Double took a 28-13 lead into the half. D-Elite would struggle to find consistent scoring again in half two. Benjamin Martin managed eight points and Bryce Jenkins would add six. But Patrick Carnes would heat up for Triple Double, finishing with 12 points. Carnes and his squad would finish the second half strong and cruise to a double-digit championship game win.

Dream Elite beat the Atlanta Nets 46-30 to win the 10 and under division of the Georgia Cup IV tournament on Sunday.

DeMauri DeBose led Dream Elite with 12 points from several takes to the basket and made free throws and Condis Cherry also added 11 points of his own from strong shot selection and good movement in transition. Overall, Dream Elite’s offensive firepower and tough defensive play proved to be too much for the Atlanta Nets.

Seven Rashad led the Atlanta Nets with 8 points from several layups and foul shots with Jaden Smith also contributing 7 points as well from inside baskets.

Dream Elite beat the Georgia State Warriors 42-27 to win the 9 and under division of the Georgia Cup IV tournament on Sunday.

Hudson Snider led Dream Elite with 10 points each excelling from strong drives to the basket and good play in transition with Amonett even adding a pivotal 3 point basket in the second quarter shifting the momentum and ultimately starting the run to pull away for the remainder of the game. With the game being 17-16 at halftime, Dream Elite’s defense was the ultimate X-factor as they put together multiple possessions in a row preventing the Warriors from crossing half court.

Jahmar Maurice led the Warriors with 9 points through a mix of inside baskets and several trips to the free throw line with Holden Hoopingarner also scoring 8, making 6 foul shots himself.