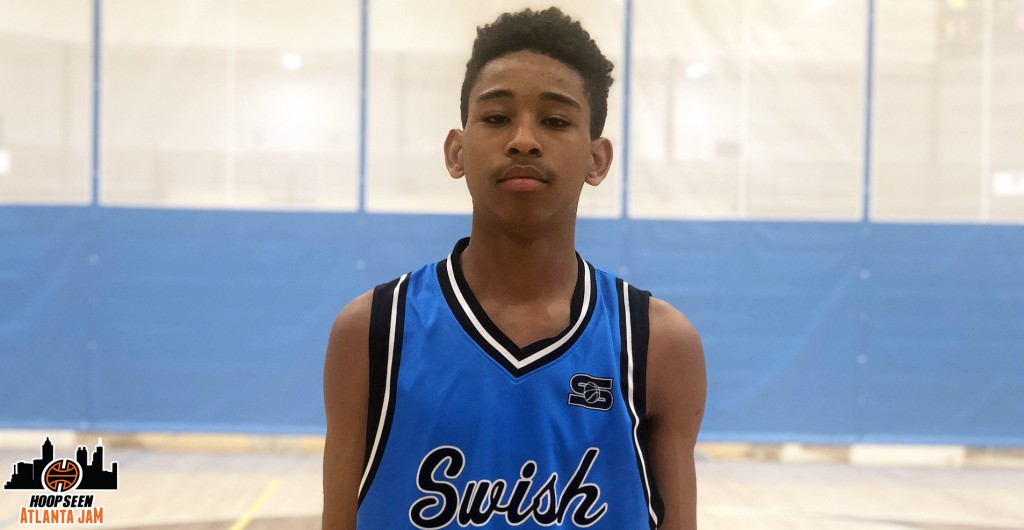 There were a number of underclassmen that stood out at the 2019 HoopSeen Atlanta Jam. These four jumped off the pages to Chase Crawford and Bre Singleton. Illinois, Alabama, Georgia and Florida are well represented.

Joshua Adamsel, Swish Chicago 16U, PG (pictured above)
The point guard of Chicago showed the true makings of what it means to be a point guard in this tournament. His abilities to navigate the offense effectively and drive inside were phenomenal not to mention his passing vision, if there’s a guy open on court, there’s no question he’ll find him. Adamsel has already picked up interest from his hometown school Northwestern and this is only the beginning for a kid with a bright future ahead of him. - Chase Crawford

Ke’Darion Rabb, AOB Elite 2021, F
Rabb appeared to have it all in this year’s Atlanta Jam. The 6’5 forward used his overpowering strength to score inside against his opponents while also displaying an array of other skills including a strong ability to handle the ball and good passing vision. He made one behind the back no-look bounce pass from underneath the basket that would take anyone’s breath away. His versatility will be key for him going forward but Rabb definitely has a good chance to be a big-time name going forward. - Chase Crawford

Harrison Gewirtz, Atlanta Astros, SG
One of the best shooters I saw over the weekend was Atlanta Astros guard Harrison Gewirtz. The Druid Hills High School shooting guard has one of the quickest releases I’ve seen in the class of 2022. In the Astros’ matchup with Team Impact on Sunday, Gewirtz had 20 points including six three-pointers from deep. He managed to create shots for himself even after being face-guarded for the majority of the second half. His creativity on the offensive end will surely continue to be an issue for defenders through this season. - Bre Singleton

Malakai Smith, TNBA South 2022, SG
Smith had a great Atlanta Jam weekend for TNBA South. He went 3 for 3 from beyond the arc and had 17 points in their Friday night matchup. The six foot small forward continued to find himself in double figures including a 21 point performance on Sunday afternoon. Smith is a solid finisher around the rim and has a field day with smaller defenders in the paint. He’s also a great defensive player whose able to guard multiple positions. - Bre Singleton