17U Story Starters at the 2019 Bob #Gibbons Tournament of Champions, Part II 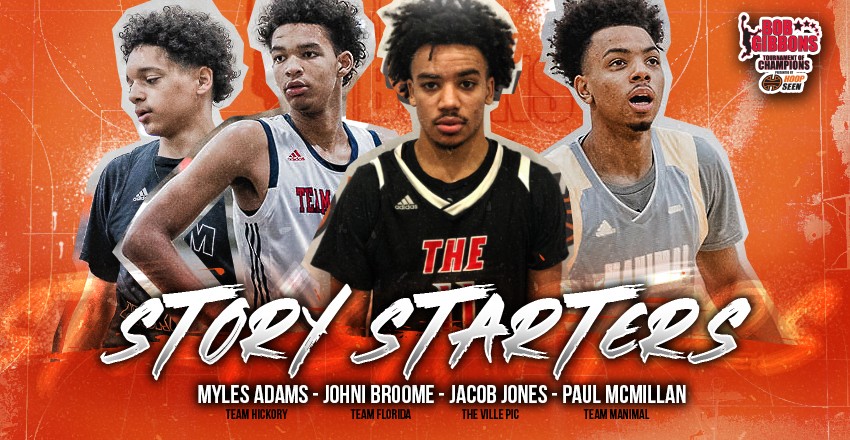 One of the great things about the Bob Gibbons Tournament of Champions stage is the platform it has become to start a prospect’s story. At the 2019 event, there were several players who turned the volume up and made everyone take notice with their play. Meet our first round of Story Starters from #Gibbons.

Myles Adams, Team Hickory
Adams made quite the impression on Friday night at Gibbons and it carried over into the weekend. At 6-foot-3, the long, slender combo guard has a crafty game. He made shots at a consistent rate, but the most impressive aspect of his game was his deceiving explosiveness off the dribble. Adams was able to explode past defenders and score at the rim with ease. At this point, the junior looks like a definite Division I prospect. He only lists interest from Randolph-Macon, but I would expect a variety of Big South, OVC, and SoCon schools to follow him throughout the summer. - Garrett Tucker

Johni Broome, Team Florida
Broome intrigues me every time I see him. He plays bigger this is his 6-foot-8 size. As a rebounder, he gets balls out of his area and goes hard after them. More times than not, he turns his offensive rebound into a turnaround put-back score. He plays with a level of passion and his motor runs non-stop. That allows him to cash in on production. Broome makes the buckets you hope a big man his size can score in the paint. As college coaches look for size in the 2020 class, Broome should be sleeper with exploring even more in the July NCAA Live Period. - Justin Young

Jacob Jones, The Ville
The Vill lead guard controlled the tempo throughout his games and made plays. The Louisville, Kentucky native led The Ville to a 2-1 record overall at Gibbons and he was a huge part of it. Jones is a skilled guard that is shifty with the ball in his hands and relentlessly attacks the paint. The results are him scoring or getting to the foul line. He doesn’t report any offers at this point but lists interest from Indiana State, Valparaiso, Miami (OH) and Purdue. - Justin Byerly

Paul McMillan, Team Manimal
Last year it was Team Charlotte guard Jalen Hood Schifino whose play as underclassmen captivated our staff. This time around, all eyes were on Manimal 2022 guard Paul McMillian. There were no signs of him being a youngster on the court that was just trying to blend in our find his way. In fact, at times it was McMillan that seemed to be the most under control and well-versed player on the court. With game beyond his years, it’s easy to see why division one programs have put out early feelers and offers to Ohio native. Tennessee Martin and Xavier have kicked started his offer sheet while Cincinnati, Ohio State, Ole Miss and Kentucky have shown some interest. - Tai Young