17U Story Starters at the 2019 Bob #Gibbons Tournament of Champions, Part I 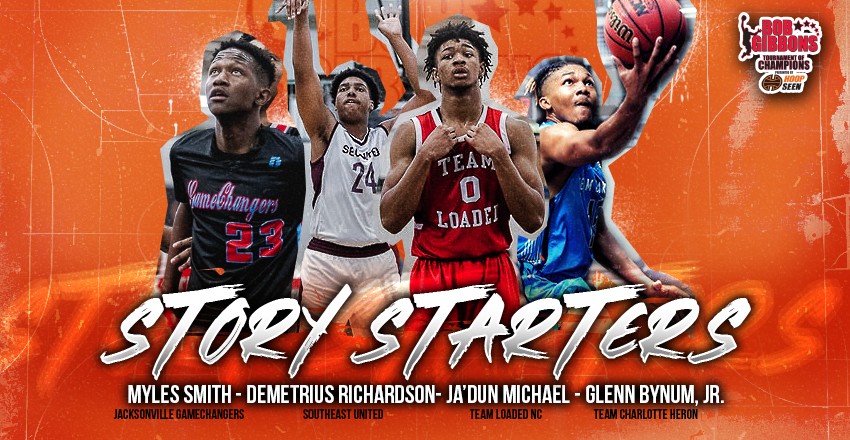 One of the great things about the Bob Gibbons Tournament of Champions stage is the platform it has become to start a prospect’s story. At the 2019 event, there were several players who turned the volume up and made everyone take notice with their play. Meet our first round of Story Starters from #Gibbons.

Glenn Bynum, Jr., Team Charlotte Heron
Energy. Energy. Energy. That’s what the class of 2021 wing brought to the table. Bynum is athletic and aggressive from the wing to the rim. His constant motor was basically an invitation to defenders to come and get a whirl in the tornado. His style of play allowed him to get to the rim at a constant clip and convert shots from the charity stripe. He was good for a three-pointer a game and made people come out to guard him. It was hard to not love him as a defender, as he played a brand of basketball that has allowed other Team Charlotte guards to have success in the past. Keep an eye on him going into the summer and even into the high school season at Northside Christian. - Justin Young

Ja’Dun Michael, Team Loaded NC
Our No. 2 ranked prospect in the HoopSeenNC rankings for the 2021 class showed in flashes why we have him ranked as high. What sticks out first with Michael is the frame. Long arms and a chiseled muscular upper body. He finishes around the rim with elite athleticism and through contact. The 6-foot-6 wing displays a versatile scoring arsenal where he is a threat to put the ball in the basket from any spot on the floor. His offer list includes Hampton, UNC-Greensboro, and Hofstra. Virginia Tech, Pitt, Clemson and Virginia have started the recruiting process. - Justin Byerly

Demetrius Richardson, Southeast United
It’s a great thing to watch a player turn the corner from a once unknown project to a legitimate prospect. That transformation took place as Richardson finally added some productivity behind his size that already warranted some attention. He’s bought into the Southeast United defense and given his increase in mobility, Richardson could be a tough one on one defender for same size post scorers. As his coaching staff raves about his development, it will be interesting to see how he continues to blossom given his newly acquired starting role. - Tai Young

Myles Smith, Jacksonville GameChangers
When playing against high-level competition like Team Loaded North Carolina and Team Charlotte, Smith came to play. His competitiveness and desire to play well against the very best helped fuel his production throughout the weekend. The Jacksonville GameChangers are consistently good and Smith and his teammates are starting to see the rewards of their work on the hardwood. He’s an active body on the floor and has a live wire athlete who can and will attack the rim. As a slasher, Smith did his best work and he would go right at the defenders that wanted to protect the rim. Smith played the role of a non-major prospect worthy of a good summer evaluation. - Justin Young