Three takeaways from Saturday at the #BamaJam 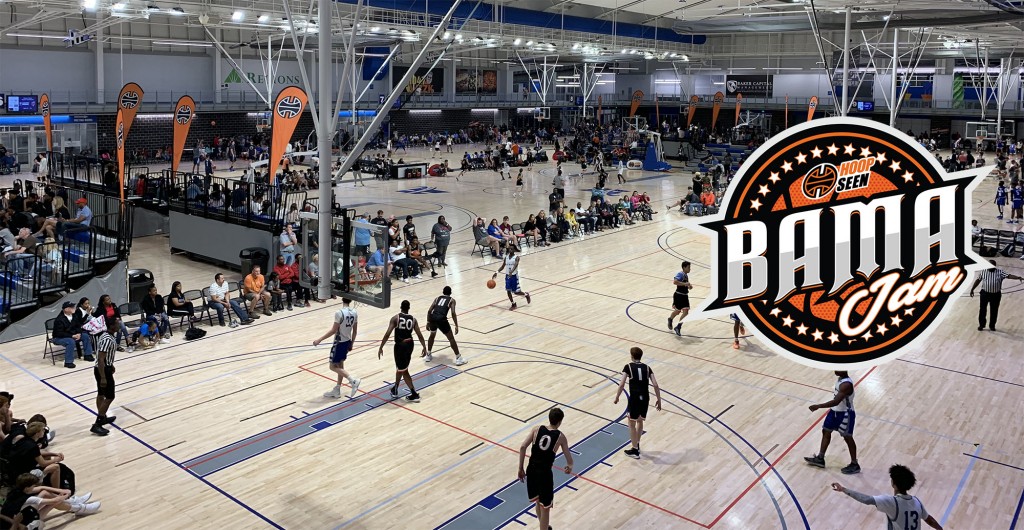 HOOVER, AL - With 11 courts going all at one and with over 100 teams in town for the 2019 HoopSeen Bama Jam, there was bound to have storylines abound on Saturday. What were the three biggest takeaways from the action? Justin Young has some thoughts on that.

GET READY FOR THE LIVE PERIOD

We came to Alabama to not only put on a great tournament but to get a sneak peek at some of the teams who will be coming to our NCAA Live Period Atlanta Jam at the end of the month.

Team WHBH from Tennessee will be on hand and they are loaded up with talented players. The starting lineup is chock full of Division I talent.

Wing Ryan Wilcox was one of the biggest eye-catchers on Saturday because of his rim-rocking athleticism. The 6-foot-5 wing was a man at the iron and few dared to get in his way. Tyler was the most impressive athlete above the rim on Saturday.

His backcourt teammates of Marvin Hughes, Jacobi Wood and Ray Tyler were steady and each showed various skill sets that translate well to the next level. You could make an argument they were the best trio of guards on the hardwood here on Saturday.

For the Atlanta All-Stars, big man Giancarlo Sanchez was impressive. The 6-foot-7 forward was productive in the paint and was a second-half producer in his team’s win over Team Speights. As college coaches look for size in the South from the class of 2020, Sanchez is a good place to start for low-major programs.

Teams can register HERE for the HoopSeen Atlanta Jam.

One of the good things about coming out to the Bama Jam is seeing new players on new teams that we haven’t had a chance to see much this spring. There were a number of players that jumped off the court on Saturday.

Amirion Joyce of CKY Magic-Morton was an eye-opener with his play in the backcourt. His relentless rim-attacking helped the Magic pick up an evening win over the Nike Elite Stars. Joyce scored 27 points in the win. Joyce got to the foul line at will and made things difficult on defenders. Joyce told HoopSeen.com that he’s heard from Morehead State.

His 6-foot-7 teammate Lincoln Bush showed off a nice fundamental feel in the paint and made big plays down the home stretch to help seal the victory on Saturday evening. He was one of the better big men we saw at the Bama Jam.

Jaylan Wetzel of the 16U RFS Elite was one of the top point producers on Saturday. The Murfreesboro, TN guard from the class of 2021 is a blur from end to end and gets into the paint with little to no trouble whatsoever. He’s been the consistent force for his 3-0 team after two days of action.

THESE GUYS JUST GOT IT DONE TODAY

Pro One (AL) guard Giancarlo Valdez had a terrific Saturday. The 6-foot-1 guard averaged 21 games in the two games I watched him in. A number of low-major programs have already shown a strong interest in him. It’s easy to see why. He’s a consistent guard.

Marietta Elite (GA) big man Ross Shepherd is on a tear this spring. The 6-foot-6 forward is having a heck of a showing on our travel circuit, posting great outing after great outing. The Pope High School forward continues to score 20 or more points on the regular and stretches the floor out to the three-point line. He’s athletic enough to cause problems down low.