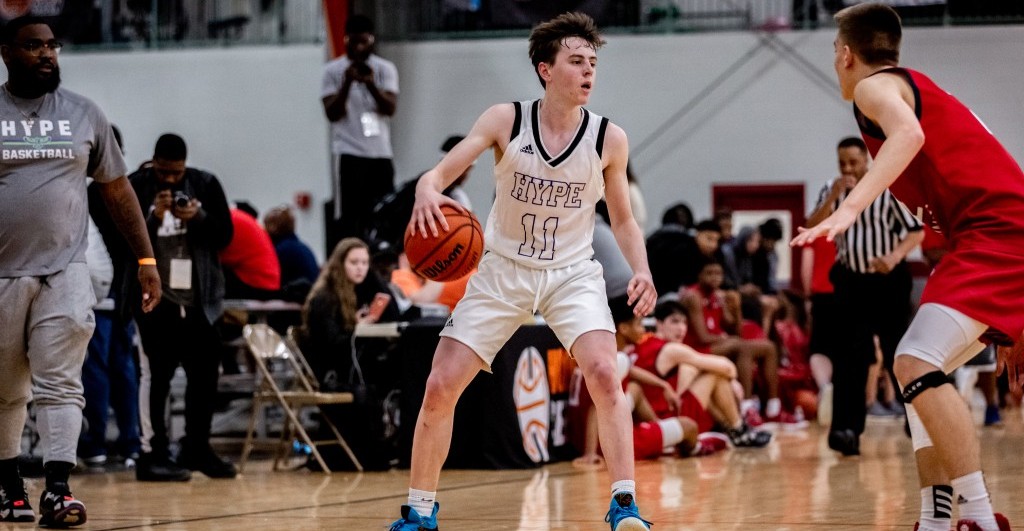 SUWANEE, GA - The action at the HoopSeen Atlanta Jam during the April NCA Live Period tipped off on Friday night. College coaches from all over the country and from every level of talent filled the baselines of the action. What did Justin Young see on opening night?

HYPE Hawks 2021 point guard Sutton Smith has control of the game. That’s the perfect elevator pitch for the point guard from north metro Atlanta. When he has the ball in his hands, his team makes positive and productive plays. He doesn’t rush things and takes his time in the half court al the while playing with good speed.

His steady backcourt play was a catalyst in HYPE’s win over the Carolina Wolves.

The lefty knocked down his perimeter shots at a confident rate. And we just don’t see great post feeds that much any more but Smith does a great job at this.

Smith said he has interest from Alabama-Huntsville but with Lennie Acuff now moving on to Lipscomb, it wouldn’t come as a big surprise to see the Bisons jumping into the mix.

Javon Benson of the Carolina Wolves had a really good showing in a losing effort to the HYPE Hawks. The 6-foot-8 big man was all over the glass and drilled a number of three-pointers to help rally his club back in to the game. It wasn’t his best game so that’s encouraging to see what could be coming later in the weekend. Benson should be one of the most evaluated big men in the event.

Tennessee Bobcats PG Ben Bryson, a one-time Tennessee Tech commitment, played well in his team’s hard-earned win over a good Middle Georgia Bucks club. Bryson is a steady hand as a point guard, mixing scoring with passing and always making the right decision. He was one of the best guards at the Atlanta Jam on Friday night.

We anticipate a number of players to take advantage of the stage this week at the Atlanta Jam and begin their recruitment. These were some of the eye-catchers.

Jarden Maze of the Middle Georgia Bucks started off his Atlanta Jam well. The 6-foot-2 point guard played very well in the event opener against the Tennessee Bobcats. He hit threes, played well in the pick and roll and defended with energy and purpose. Maze played well at our Tip-Off a month ago and continues to string together impressive showings here at our HoopSeen events. Maze should end the weekend with a nice spike in his recruitment.

Tariq Daughton of the Tennessee Bobcats played with some big time bounce in the second half to help spark his team's second half surge. The class of 2020 guard played well above the rim and earned some ink with his play. Lee University is involved.

2019 PG Dujuan Fripp scores 19 points in a Ball4Lyfe win over the Atlanta All-Stars. Fripp shot very well in the win. He’s clearly one of the better unsigned seniors in the event.

Georgia Elite Ballers guard Kalik Brooks hit some big shots in the closing moments of his team’s win of CKY Magic. He’s holding offers from Paine College and Coker while Georgia Southwestern and Lee are interested.

Logan Turner displayed some athletic touch around the rim for the Hawks in their win over the Carolina Wolves. The 6-foot-4 guard is bouncy and fun around the cup. He said Georgia Tech remains his lone offer while Georgia, who was on hand in the opener, Ole Miss and South Carolina are interested.

East Coast United forward Redrick Hill, Jr. will open some eyes this weekend. The 6-foot-7 forward can really stretch the floor with his shooting.

Looking forward to seeing more from Carolina Wolves guard Cincere Scott. His second half effort of 13 points was an eye-opener.

CKY Magic PG Amirion Joyce had 16 points in a loss to the GA Elite Ballers. He’s speedy and functional in the backcourt. I could see him blowing up by the end of the event.