Four of the best from Georgia's Final Fours 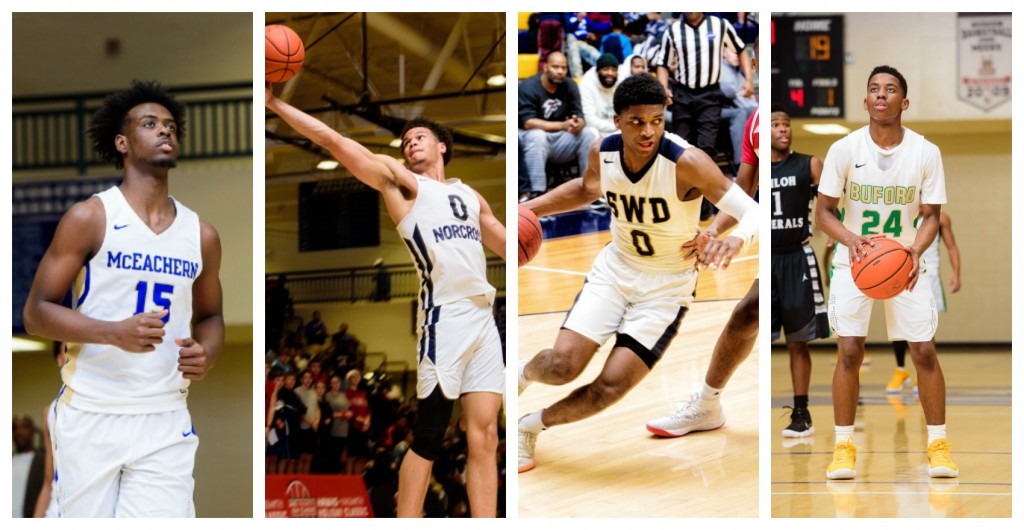 The Final Four is set for the GHSA basketball tournaments. The games are spread out all over the state and some of the matchups should of extraordinary. Our staff picked four games to watch in the Final Four on Saturday.

Norcross (22-8) vs. McEachern (30-0)
AAAAAAA
Saturday, 4 p.m. at Buford City Schools Arena
Well, here we go. This is the game the Georgia hoop heads have wanted to see since last year’s second round match-up in the state playoffs. McEachern is the No. 1 team in the nation, according to some pollsters while Norcross is playing their best basketball of the year. Does it get any better than this for the Final Four? All of metro Atlanta will be keeping a close watch on this match-up. So will the nation. The game will feature the two best juniors from Georgia in McEachern’s Sharife Cooper and Norcross’s Brandon Boston. The game also features two of the biggest winners from the Peach State over the last four years in McEachern’s Isaac Okoro and Norcross’s Kyle Sturdivant. The pairings are incredible across the board. In last year’s match-up, Norcross won big. Their 75-55 victory was a message. McEachern has been fueled by that ever since. Key matchup to watch - McEachern’s Jared Jones and Norcross’s Issa Muhammad. Muhammad had 14 points and 15 rebounds last year in the match-up and was a difference maker. Pop your popcorn, y’all. This is what Georgia high school basketball is all about. - Justin Young

Who wins this 7A semifinal game?
4 p.m. at Buford City Schools Arena

Meadowcreek (25-5) vs. Tift County (21-8)
AAAAAAA
Saturday, 8 p.m. at Buford City Schools Arena
Grimey, gritty and gutsy are just a few of the words that came to mind as I looked over the final four matchups of Tift and Meadowcreek. Both teams are known for a style of play that isn’t for the weak and timid. The combination of top tier defenses is strung together by players that with scratch and claw themselves to a chain of stops in a row. The pride taken on the defensive end is evident as neither team has any problem with a 41 to 43 final. Don’t confuse that with two teams that can’t put points on the scoreboard as Damian Dunn and Jalen Benjamin can score with the best of them. For Tift, senior guard Marquavious Johnson has put together a solid campaign while Jatarion Warrens efforts can lead to a handful of easy ones. We have all watched as teams chuck up threes, play at a breakneck speed, and finesse their way to some high scoring games. This isn’t that. These well-coached units will try to make the most out of every possession against an opposing defense that has all the answers to the test. - Tai Young

Who wins this 7A semifinal game?
8 p.m. at Buford City Schools Arena

Buford (27-2) vs. SW Dekalb (27-6)
AAAAA
Saturday, 4 p.m. at Columbus State
There are so many things to like about this matchup that a few sentences won’t do it any kind of justice. At this point in the season, we are all too familiar with the prospects that have played well enough to lead their teams this far. Buford head coach Eddie Martin has enough pieces to go around, as his depth is good enough to carry him during a starter's off night. Speaking of those starters, three of them have committed to play at the next level as Donnell Nixon, Marcus Watson, and Eric Coleman form one of the states best trios. They’ve been in this position before but don’t seem to be resting on their experience. There was a collective gasp from the state when Eugene Brown went down for Southwest Dekalb as an unfortunate injury stopped his season as he was on the rise. Despite losing one of their key pieces in a group that was starting to click, Southwest Dekalb kept their foot on the gas. KD Johnson has played as well as anyone in the state and has a heart that doesn’t pump kool-aid. James Glisson is one of the best remaining bigs in the state and his play has gained more attention from Conference USA and Southern Conference programs as of late. Both teams have the skill and toughness needed to end the others season. Here’s a nail biter if there ever was one. - Tai Young

Who wins this 5A semifinal game?
4 p.m. at Columbus State

Americus-Sumter (25-4) vs. Sandy Creek (27-3)
AAAA
Saturday, 4 p.m. at Fort Valley State
This game has a state championship flavor to it. Both teams in this match-up are worthy of such a heavy weight on their heads. Americus-Sumter has been the elimination squad all bracket long, taking out Upson Lee and St. Pius X. Both wins came on the road and both wins came on two of the toughest home courts in Georgia. On the flip side, Sandy Creek may pose the toughest of the all of the match-ups for Americus-Sumter this entire postseason. The Patriots are defending at a high level right now and boast the size to match-up with A-S big man Josh Lusane, who shined in the Elite Eight at St. Pius X. Lusane has been terrific all season long. Americus-Sumter guard Trae Brown, a long and active combo guard, was outstanding in the win at St. Pius X, too. Sandy Creek has great size in Drexel-bound TJ Bickerstaff and sophomores Jabari Smith and Deshon Proctor to slow down Lusane, and 6-foot-6 Josh Moore. For Sandy Creek, the backcourt of Julian Alexander and Keith Williams will have their hands full with the quick but patient A-S backcourt. The action in Middle Georgia will be a fun one to watch play out on Saturday. - Justin Young

Who wins this 4A semifinal game?
4 p.m. at Fort Valley State