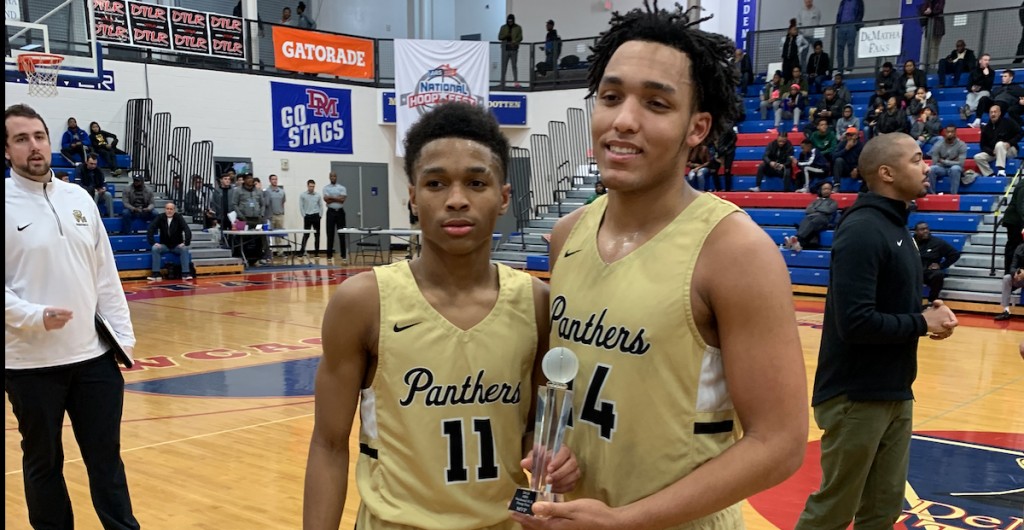 HYATTSVILLE, MD - What a weekend it was in the nation’s capital. The 2018 ARS Rescue Rooter Washington DC HoopsFest was loaded with talent and there was so much to take in. Sunday was highlighted by two local teams that were looking forward to redeem their Saturday outcomes. They did. Boy, did they ever.

Hunter Dickenson, DeMatha (MD): The 7-foot-2 big man is one of the biggest and strongest players in prep basketball. He uses his brute strength to challenge anyone that steps into the paint with him. On Sunday night, he welcomed five-star stud Jalen Duren into the ring. The match-up pinned the two best big men in the entire event against each other. Dickinson finished with 20 points, 13 rebounds and four blocks in the win. He was his usual productive self down low.

Justin Moore, DeMatha (MD): The future Villanova Wildcat is the consummate lead guard. He’s as battle-tested as any guard in the country and more times than not, he’s piloting a team to the championship. The 6-foot-4 guard is consistently strong. That’s the beauty of his game. Moore was the leader for the Stags against a hungry Roman Catholic team and helped finish the event with a victory.

Josiah Freeman, Paul VI (VA) / pictured above: Shooters are going to shoot. Freeman gets that. That’s why he was a trending player over the weekend here at the DC Hoopfest. Against Nicolet (WI), Freeman was dialed in for 26 points and hit six of nine three-pointers. He was brilliant all weekend long for Paul VI and should see a major spike in his recruitment. Was this the weekend where it all changes for his future? We’ll find out soon enough. Odds are the answer is a resounding yes.

Jamari Sibley, Nicolet (WI): Lost in the shadow of Jalen Johnson’s terrific outing on Saturday was the play of his 2020 classmate Sibley. The 6-foot-8 forward from Nicolet (WI) has some great moments in their win over St. Johns (DC). Sibley is uniquely long and skilled on the wing. His long strides shrink the court as he attacks from the wing to the rim. From a long term perspective, Sibley was one of the most intriguing players that I saw on Saturday. He’s a top 100 national prospect and could be a guy that makes an even bigger jump over the next 12 months. His recruitment is filled with a diverse list of suitors - Florida, Rutgers, Marquette, Georgetown, Iowa State, Wake Forest, LSU, Temple, Georgia Tech, Illinois, Minnesota, Southern Cal, Iowa, AriZona State, Depaul, Kansas State, UNLV, Green Bay and Milwaukee.

Hakim Hart, Roman Catholic (PA): The future St. Joe’s forward had himself a nice weekend in the nation’s capital. On Sunday against DeMatha he was his team’s best offensive weapon. The long 6-foot-7 forward was drilling shots on the wing (6-8 from three) and tallied 22 points and seven boards in the tough defeat. Hart should be a major figure in the St. Joe’s lineup over the next four years. He’s a versatile option from the outside and in.

Mekhi Long, Bishop McNamara (MD): The future Rhode Island forward was a do-everything player in his team’s smothering of the Bullis School. Long was the go-to guy on both sides of the floor en route to 18 points and nine rebounds. He was all over the floor as a facilitator and a passer, too. Rhody has deep D.C. ties on their coaching staff and came back to a fertile ground and landed a player that should really help their program for four years.

2022 Dug McDaniel, Paul IV (VA) / pictured above: The 5-foot-10 guard earned some fans with his play on Saturday night here at the ARS Rescue Rooter Washington DC HoopsFest. McDaniel kept the ball on a string and fed Josiah Freeman in the first half. McDaniel’s ball-handling was outstanding and a big reason why Paul VI had the success they had in the first half of action against Montverde. Against Nicolet (WI), he made the next player featured even better. McDaniel finished with 13 points, 11 assists, six rebounds and three steals.

2022 Jalen Duren, Roman Catholic (PA): The 6-foot-9 center was one of our favorite players at the USA Basketball camp back in October. On Saturday, he was one of the best interior defenders in the event. Duren is a nice player now and he’s trending into something very special down the road. Duren finished with 15 points (7-9 FG), grabbed eight rebounds and blocked four shots in his first ever high school game. A game later against the terrific DeMatha team, Duren had 17 points and seven rebounds against 7-foot-1 junior Hunter Dickinson.

2021 Trevor Keels, Paul VI (VA): The strong-bodied 6-foot-4 wing shot very well from the perimeter and proved to be the go-to threat for the Virginia school against Nicolet (WI). Keels is a hard player to guard because he can use his physicality to his advantage all the while knock down the three ball.

2021 Kobe Johnson, Nicolet (WI): The 6-foot-3 sophomore had some good moments for the boys from Wisconsin over the weekend. The younger brother of Jalen Johnson is carving a niche for himself as a quality combo guard. He was effectively efficient on a day where big brother wasn’t the most dominant guy on every possession like he was the game before. Kobe Johnson finished with 21 points in a tough loss to Paul VI.

DJ Gordon, First Love (PA): The 6-foot-5 junior guard was impressive on Sunday afternoon as he scored 18 of his 22 points in the second half against National Christian. Gordon said he has offers from South Florida, Monmouth, Central Connecticut St, Hofstra, Eastern Michigan, Dayton (unofficial visit) and Kent State (unofficial visit).

Tegra Izay, Archbishop Carroll (MD): The 6-foot-10 big man was an eye-catcher against Roman Catholic. He rebounded well in traffic and had a couple of buckets that made you sit up a little higher in your chair. Izay has high-major size and a high-major ceiling.