Best of the South championship stories 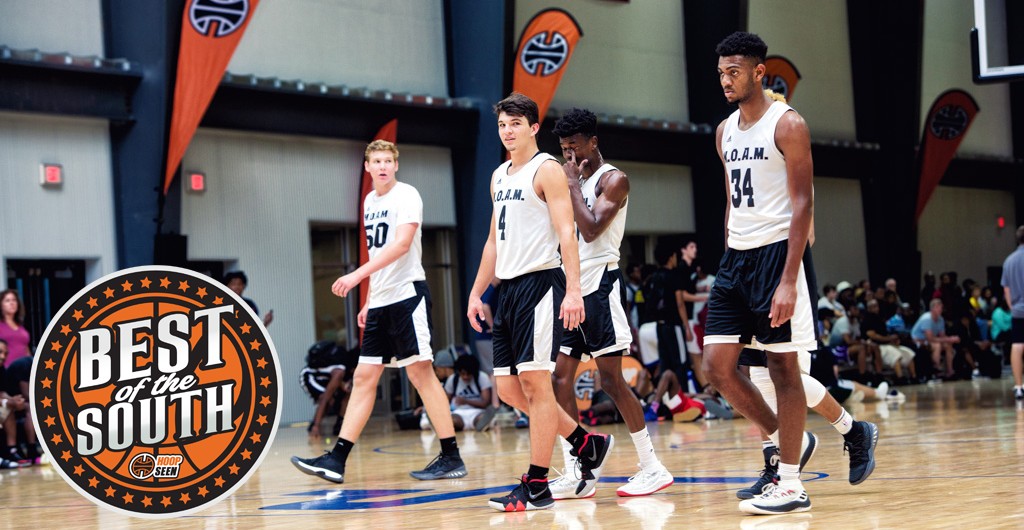 (We will update throughout the day.)

The Georgia Warriors were led by Caleb Hurst, who scored 18 points. Hurst played really well all week long at the Best of the South.

In the end, it was a matter of hitting free throws and playing defense. D’antaye Page knocked down a pair of free throws and Joshua Johnson had a steal and dunk at the buzzer to seal their win for the title.

Page finished with 20 points in the win. Johnson had 13. Mitch Ganote had 17 points and controlled the pace from the point.

The Alabama Celtics claimed the 17U White championship after defeating EAB 70-59 at #BOTS on Sunday afternoon. The Alabama boys ended their weekend on a high note with an impressive 6-1 record for the tournament.

The Celtics used a total team effort in the championship win, but Eddie Smith was impressive throughout the game and the weekend. He led the way with 18 points in the championship game to lead all scorers. High energy and athletic wing Sedrick Pettway scored 13 points, while Willie Wilson added 11.

Keon Johnson scored 16 points in the loss for EAB. Rising senior K.J. Johnson chipped in with 12. Both players were sensational throughout the weekend.

Two of the most storied non sponsored teams in Georgia locked horns for the championship. And to no one’s surprise, it was as good as you hoped it would have been.

The game was a back and forth affair throughout and fun to watch. In the end, the All-Stars had one more stop than the Smyrna Stars.

Nick Edwards scored 16 points while Eric Coleman had 13. Luke Chism scored 10 in the win. As usual, it was a nice balanced effort from the ATL squad.

For the Smyrna Stars, the backcourt of Kris Gardner (23 points) and Brandon Barron (19 points) was hard to stop throughout the contest.

JSI Elite captured the 17U Black championship on Sunday afternoon after defeating PSB Chattanooga by a score of 46-41 at #BOTS.

Marion Humphrey had a strong weekend all-around and commanded respect for JSI, but point guard Garrett Hicks was the difference-maker in the championship game. He scored 14 of his game-high 18 points in the second half to help push the Alabama-based program over the top. Jeremiah Littlepage added 7 points.

Brett Newcome capped off the weekend on a good note for PSB Chattanooga, as he led his team with 10 points in the game. Jacob Dyer and Tanner Shulman also chipped in with eight points.

Depth and size paid off in the long run for East Coast United as they gutted things out to win the 17U Yellow Championship on Sunday afternoon at Best of the South. The Florida-based squad held on to win 60-58 over a scrappy BJBC team.

Nate Davile and Donald Richardson led the way for ECU with 16 points apiece, but big man Gio Crooks was just too much down the stretch. The 6-foot-7 center scored a couple of buckets at the end of regulation and in overtime to help secure the win. He finished with nine points.

Lior Berman led the way for BJBC in the loss. He led all scorers with 19 points. Justin Webb capped off a strong weekend with 17 points, including five 3’s.

The South Florida Rockets fought hard and earned a championship win despite going into overtime against God’s Property.

For the South Florida Rockets, the 2020 inside-outside combo of forward Inady Legiste and combo-guard Dave Herard proved they deserved to be on the big stage. Herard is a pure scorer. He finished with 20 points and did whatever it took to put the ball in the basket. At 6-foot-7, Inady Legiste had a nice outing. He finished with 18 points while displaying strong finishes in the paint against opposing defenders.

Trey Smith capitalized on his shooting ability for God’s Property. Smith led the team in scoring with 16 points due to his knack for making jump shots off-the-dribble and off-the-catch. Riley Costas provided a huge momentum shift for God’s Property in the second half. He not only hit the shot to send them into overtime, but he played with hustle and determination. His 11 points were significant for his team. Forward Armari Davis did well manning the frontcourt and rebounding the basketball for God’s Property.

Georgia Stars 2021 beat East Coast United 67-45 to win the 16 and under division of the Best of the South tournament on Sunday. AJ White scored 16 points that included four made three-pointers. LJ Thomas also scored 16 points mainly off of strong drives to the basket. The Georgia Stars played strong team ball and attacked the rim efficiently, leading to their victory. Chandler led the offense for East Coast United scoring 14 points. The majority of his points came from inside the three-point line and he played strong defense as well.

Gotta love a good back and forth contest for the championship in one of the 16 and under title game of the Best of the South.

HYPE had 19 points each from big man Cole Middleton and guard Sutton Smith. It was a nice fire and ice combo between the two. Middleton powered his way inside while Smith had it rolling from deep. Matthew Cleveland scored 12 points.

The 16-and-under black division championship game between the EAB Tigers and Atlanta Xpress (Hook) was filled with grit and toughness. EAB eventually held on to a lead late in the second half bringing them the championship trophy.

EAB big-man Dalton Marsh showed complete dominance in the paint. He finished with 13 points while racking up big numbers in the rebounding department. John Valdez sustained the backcourt with an effective scoring display. He also scored 13 points. Another key piece for the Tigers was guard Tariq Daughton who chipped in 11 points.

For the Atlanta Xpress, guard Jabiri Smith had an efficient game and led the team in scoring with 21 points. 6-foot-4 forward Destin Jenkins was also noteworthy. He finished with 15 points while displaying his versatility on drives to the rim and by connecting for jumpers from the perimeter. This Atlanta Xpress team finished with a 6-1 record during the tournament. They were definitely impressive.

Elfrid Payton Elite beat Pro One Select 58-43 to win the 15 and under division of the Best of the South tournament on Sunday. Tyrese Johnson and Jamond Vincent both scored 12 and 10 points respectively mainly off of attacks to the basket and success at the free throw line. Elfrid Payton Elite also shot the ball well from the perimeter and played tough defense as a team. Brody Peebles played outstanding for Pro One Select, leading the team with 22 points with a mix of drives and perimeter shots.

What a game between Game Elite Gold and PCBC Stars. In the first half, this game was in favor of one team, the PCBC Stars. With a comfortable lead for most of the half with good play behind Riley Leonard and Hunter Ivy. PCBC felt that they were on their way to some medal.

George Pridgett Jr was rolling from the start and if it wasn’t for him maybe the lead would have been to out of reach for Game Elite to do anything. Pridgett hit an insane turnaround 3 pointer at the buzzer to cut the lead down to 6 which was the lowest since the beginning minutes of the game.

PCBC opened up the second half with 2 3s and a traditional 3 point play that gave them a 15 point lead in less than 2 minutes. It looked as if they were on there the way to an easy victory. However, the sharpshooting and toughness behind the game elite players never let them get out of the game.

George Pridgett Jr, Shomik Shahjahan, and Rion White were all terrific for Game Elite and were crucial pieces to them taking the lead with about 4 minutes left. You can see once Game Elite took control the body language and sense of urgency for PCBC dwindled and they started playing with less confidence.

George Pridgett Jr by way of Roswell High School had a monster game ending up with 35 points, 9 of which were 3s. He simply couldn’t miss and teammates White who finished with 12 huge points and Shomak who controlled the tempo and finished with 13 points, were able to overcome the PCBC Stars and be crowned the BOTS 15u White Champions.

Coming into this championship game Atl Big 5 was looked at as the favorite over the Fury. The Big 5 came into this game with an impressive 6-0 record and was looking to complete the task of going undefeated at #BOTS. The Fury also had an impressive 5-1 record with their only loss being to none other than The Big 5.

Joyful Hawkins was the best talent on the court, but it wasn’t Hawkins that gave the Big 5 the edge in the game. It was mainly an overall effort for the big 5 with four players that ended up in double figures. Point guard Juvon Gamory and combo guard Scoot Henderson both lead the Big 5 in scoring with 16 points. Juvon really impressed with his ability to beat defenders off the bounce and his exceptional passing ability. He also shot the ball really well hitting 3 three-pointers. Albeit wasn’t Joyful's best performance he was still able to impact the game and finished with 12 points respectively.

Tennessee Fury played a hard fought game, but in the end, didn’t have enough to overtake Atl Big 5. Tai Christian and Dillon Atwell both played well and lead their team with 12 points. The Fury, who is a well-disciplined bunch narrowed it down to a 4 point game late in the second half but the Big 5 was too much and quickly took the lead out of reach.

The Atlanta Big 5 played an impressive brand of basketball all weekend and ultimately did what they came here to do. Joyful Hawkins is more times than not the bright spot, but this is a team full of players that should have a lot of success in the future. The Atlanta Big 5 is this year's 14u BOTS Champions.