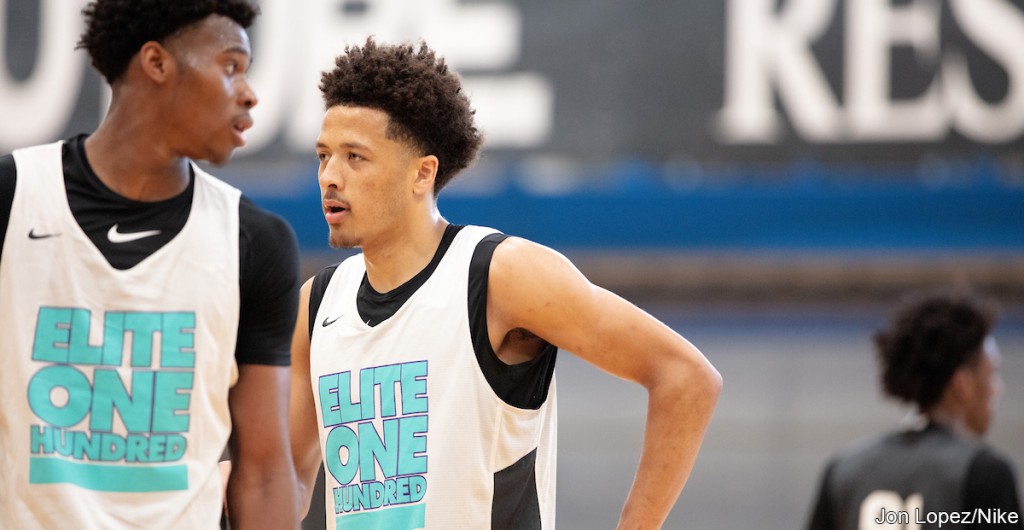 Our HoopSeen team spent last week in St. Louis for the Nike Elite 100 camp, featuring the top players from the classes of 2020 and 2021. There were over 100 campers and our staff dove deep into their notes and indented the top performers. Meet Tai’s five.

The first place I sat during Thursday's action was a front row seat for the Zion Harmon show.  What immediately jumped out was the quiet confidence that oozed out anytime the ball was in his possession. Harmon went about his business hitting threes off the bounce and breaking defenders down on the way to one man runs. A couple of quick scoring spurts followed by some no-look assists made him my day 1 top performer. There's a ton of fanfare following this prospect and he plays like he knows it.

If there's one prospect I expect to blow up from this event it's California guard Devin Askew. One of the more dynamic playmakers in the building,  Askew made several eye-opening plays through several days of action. Watching him navigate ball screens was a thing of beauty. What was interesting about this point guard was he was a walking highlight real that didn't purposefully try to create on.  Every move,  every pass,  and every shot was made with the purpose of making the right play. The floor on this prospect is high with his ceiling being even taller. Expect for his name to be a staple for high majors and fans sooner than later.

I must have said "wow" a dozen times watching Jalen Johnson thread the needle up and down the court.  Several of his teammates reaped the benefits of this unselfish and gifted prospects elite ability to pass the ball. The defense must have felt conflicted as Johnson sprinkled in enough pull up threes to make any defender get their heels above the line. Once committed, the 6'7 match-up nightmare would pull off a simple yet effective move on his way to a crafty finish. Equipped with great size and feel, Johnson did it all as a high-level facilitator and scorer.

Jonathan Kuminga made my short list of one of the more impactful two-way players at the event. If there was a rebound to be had then chances are he would be in the mix. Once the ball was in his hands good things would routinely happen. Starting the break was commonplace as he would rip down a rebound and the guards knew to flood the wings and trust his decision making.  Good variety leads to good outcomes as the high upside forward took similarly sized defenders down to his spots.  Kuminga had a productive weekend which is scary to say because his best ball is ahead of him.

The way Cunningham approached a defender guarding him was like watching a quarterback dissect a loose coverage with no pass rush. Whatever they offered him he took it and then some.  He performed high-level combinations in all 3 levels of the floor. Every move was calculated and performed at a tempo that is not often duplicated by prospects of that age. Any wrong shift in positioning resulted in a bucket. I haven't been able to watch the rise of Cunningham but you can tell the game is moving at a snail's pace for him.  It was bittersweet at times to watch this high major prospect punish anyone in his way.