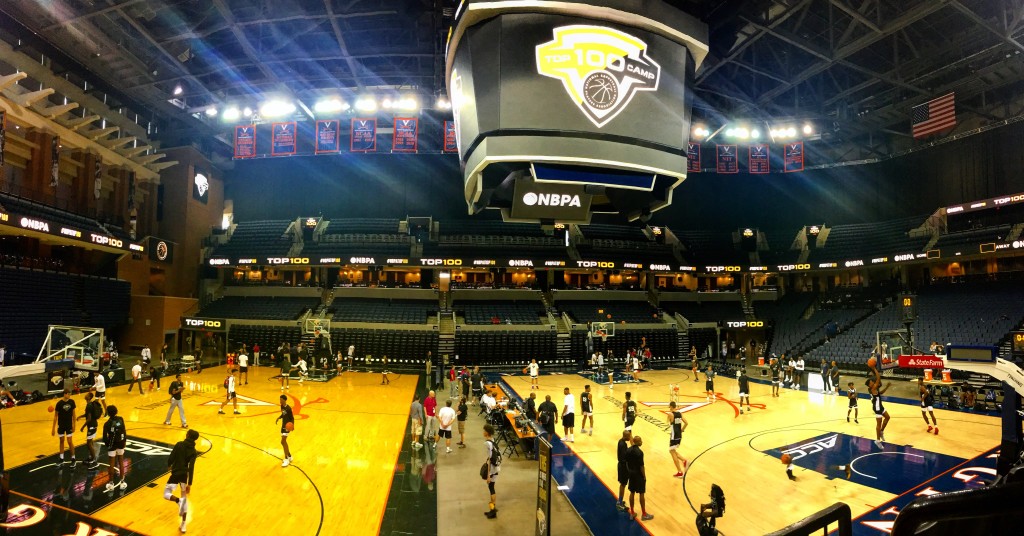 CHARLOTTESVILLE, VA - The NBPA Top 100 camp tipped off on Wednesday at the John Paul Jones Arena on the campus of the University of Virginia. The camp started with several impressive

Anthony Edwards, Atlanta (GA) Holy Spirit Prep, SG, 2020: The summer takeover started at the start of the month for Edwards as he dominated the Pangos All-American camp. Fast forward to opening day at the NBPA Top 100 camp and Edwards continued his tear. He was brilliant in the opening game of the camp. Sure, he can score with the best of them. That has never been in doubt. But his attention, and aggression, on defense was outstanding. Edwards was one of several players on his team who completely bought into the defensive challenge. There were flashes of Dwayne Wade in his game on Wednesday afternoon.

Walker Kessler, Atlanta (GA) Woodward Academy, C, 2020. The 7-footer was just brilliant on opening day. He was one of the top three overall big men that I saw all day. He’s getting better each day out. With confidence rising, Kessler is starting to show off all of his tremendous skill for a player of his age. He rebounds very well. His offensive game will slide out to the three point line. He’ll run with speed and grace. Overall, he was just terrific and set the bar for himself as one of the top overall post players in camp. Kessler is a no-brainer 5-star level player in the 2020 class nationally.

Kevin McHale - 2019 PF Will Baker of Austin, Texas. Credit to our former HoopSeen National Recruiting editor Corey Evans for this comparison. Baker made tough shots with pivots that the former Boston Celtic would appreciate.

Tauren Prince - 2019 SF Precious Achiuwa of Bronx, NY. Achiuwa made plays that very few high school players can make. He exploded with power to the rim and punished the iron and defenders. He put up near double-doubles both games and was one of the toughest players to defend athletically and with strength.

Kenyon Martin - 2019 F Kenyon Martin, Jr. of West Hills, CA. Just like his dad, the younger Martin went rim hunting with power, explosion and excitement every time he left the floor. Martin, Jr. is pure entertainment and plays with an edge that allowed his dad so much success throughout this career.

SHOOTER: Dahmir Bishop of Philadelphia was the camp’s leading scorer on opening night and one of the reasons he kept the scorekeepers busy was because of his shooting touch. He can light it up for deep and did just that. The 6-foot-4 guard looked like a top 50 player in the country after scoring 50 total points in two total games.

PASSER: When you have the camp’s best one-day scorer, you better believe he didn’t do it alone. Meet Utah’s Ryan Jones. The point guard was the glue to Bishop’s big day as a scorer.

SHOT-BLOCKER: Isaiah Jackson, a 6-foot-8 forward from Michigan, takes this claim. The class of 2020 forward has amazing leaping ability and quick twitch reactions. He’s surprised some shot-takers with the speed and height in which he rises to erase a shot.

ATHLETE: Keon Johnson of EAB fame was an absolute beast on both ends of the floor. He exploded up and down throughout opening day as an athletic scorer and defender. The 2020 guard from Tennessee has proven he belongs here cementing himself as a one of the camp’s best athletes.

SPEED: Sahvir Wheeler of College Station 5-foot-8 future Aggie was a blur with the ball and easily the fastest player I saw on opening day. He matched his wheels with great ball-handling skills.