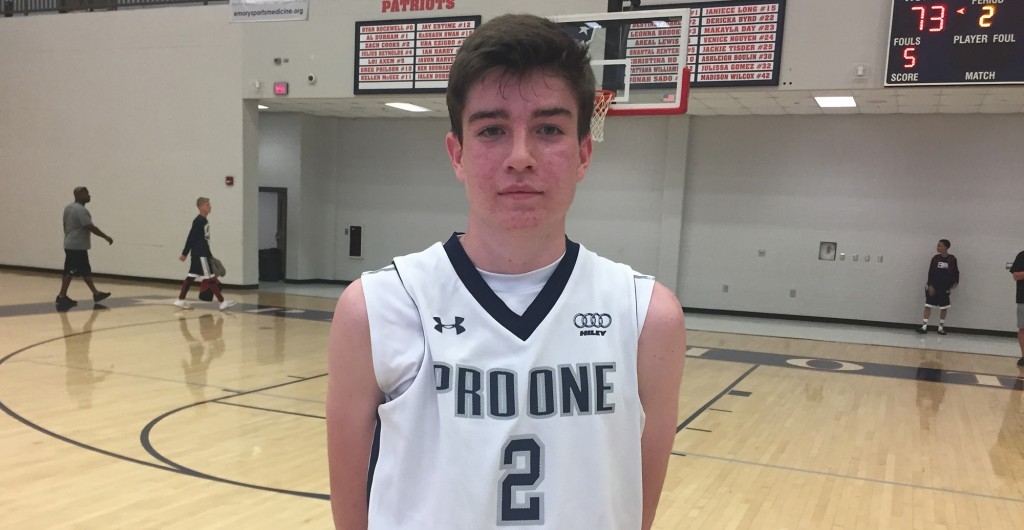 The Gulf States Cup kicked off the travel season on Friday afternoon in Huntsville, Alabama. With some of the top local teams in attendance, there was no shortage of talent or competition. Here is a recap from the weekend…

KICKING THE GULF STATES CUP OFF WITH A BANG

The Rocket City Elite (AL) and Pro One Select White (AL) 14U teams started the tournament off right with a 49-48 nail-biter. Pro One Select White found themselves down early but took their first lead with 4:04 to go in the fourth quarter to come back for the one point victory.

Leading the comeback was Jonah Williams. The 5-foot-9 Plainview (AL) product is playing up in the 14U class and it doesn't seem to bother him. The natural shooting guard scored 14 points in the contest while knocking down four 3's. His clutch shooting was evident in the final frame as he scored 11 of his 14 points in that quarter. Williams also accounted for several steals while playing the passing lanes.

The key piece for Rocket City Elite was Joshua Price. Price is a 5-foot-5 point guard that has a knack for making the right pass every time. He scored 10 points with his ability to get a shot off around the basket and around contact. His outside shot and mid-range jumpers were also falling over the weekend. He plays the pick-and-roll perfectly with his advanced basketball IQ. He knew when to take the drive or take the shot. He was even better finding the roller with a great mixture of bounce passes, lobs and lead passes. His defense was well above average as well. He uses his speed to keep the ball handlers at bay when playing man. He is very sneaky from the help side with his double teams and snagging passes out of the air.

Tyrik Walker also had a very strong performance in a 72-66 win for Rocket City Elite 14U over the Alabama Celtics. The long and athletic post scored 29 points. Twelve of his 29 points came in the critical fourth quarter. He ran the break well and scored easily in transition.

When the Mississippi Spartans (MS) and the Hawks Elite (AL) 16U's took the court on Friday night, there was an energy in the gym that you could feel. Both teams really got after it on the defensive end of the floor. In the end, the Mississippi Spartans came away with the 73-68 victory as their bench seemed to be an energizing force throughout the entire game.

The most impactful player for the Mississippi Spartans was Q Wimsatt. The 6-foot-3 2021 wing from Corinth (MS) is playing up this summer and made the most of his playing opportunities. He scored 21 points with 10 of them coming in the fourth quarter. His 15 footers were automatic and he scored the ball around the basket after grabbing offensive boards. He is one of the players that has that knack for being in the right place at the right time every time.

The Hawks Elite received a second half surge from a previously unknown presence. Decorian Payton scored all of his 17 points in the second half. The 6-foot-5 post from Center Hill HS (MS) could not be stopped in the lane. He went to work in the paint using a variety of head and body fakes to get shots on the glass. He drew a large portion of fouls from the low and high post while still finishing after contact. He crashed the boards on both ends and was a rim protector on the defensive end. Payton was a nice find from Mississippi.

Kobe Griffin was a bright spot for Team Chad 15U in two losses. The guard dropped 24 points while knocking down five 3’s in a loss to Pro One Navy. He also led the team in scoring with 14 points in a loss to the Alabama Celtics on Saturday. The muscular guard showed that he can score on all levels and plays with a high motor on the defensive end. The Austin High School (AL) product is one to watch for over the next few years.

Kenneth Sanders had a couple of impressive showings throughout the weekend. The 6-foot-3 2019 guard from Decatur (AL) showed that he can score with ease, dropping 27 and 21 points. He also rebounded at a high clip snagging 12 and 9. He has the ability to take a game over when needed.

The MC Warriors (AL) and the Pro One Select Navy (AL) teams met in the highly anticipated 15U championship game. The Waaarrrriooors, as the fans were chanting, were playing up with their 14U team. They had a very impressive team performance during the tournament. Pro One Select Navy got the better end of the younger team taking home a 79-75 win.

For Pro One Select Navy, two guys stood out during the event. Landan Williams dominated the post for the champs. The 6-foot-7 Alexandria (AL) big scored 14 points in two previous outings before the championship game. He saved his best performance for the last game, scoring 21 points with 10 of them coming in the fourth quarter. He masterfully worked the glass with a variety of post moves and offensive put backs.

The best individual performance of the entire event that I saw came from 2021 shooting guard Brody Peebles. Peebles (pictured above) tallied 24 points in a laid back showing in game one. He nailed four 3's and showed his shooting touch. In the second game, he became a little more aggressive getting into the lane and earning 8 free-throw attempts. In the championship game, he reached high scoring honors with 32 points. He upped his aggression even more at getting to the rim and was rewarded with 11 free-throw attempts. He stepped up in the fourth quarter of the championship game scoring 11 in the final frame. The most impressive stat for the 6-2 Hartselle (AL) guard was his free-throw shooting at the games I covered. He was 23 for 23 from the charity stripe in the three games.

Despite the loss, the MC Warriors had a nice showing playing up an age group. With some of the top young 2022 prospects in the state with Tyrese Elliott and Tai Hayes, the Huntsville-based group should have another strong year. Keep an eye on the young guys as their high school careers begin next year.