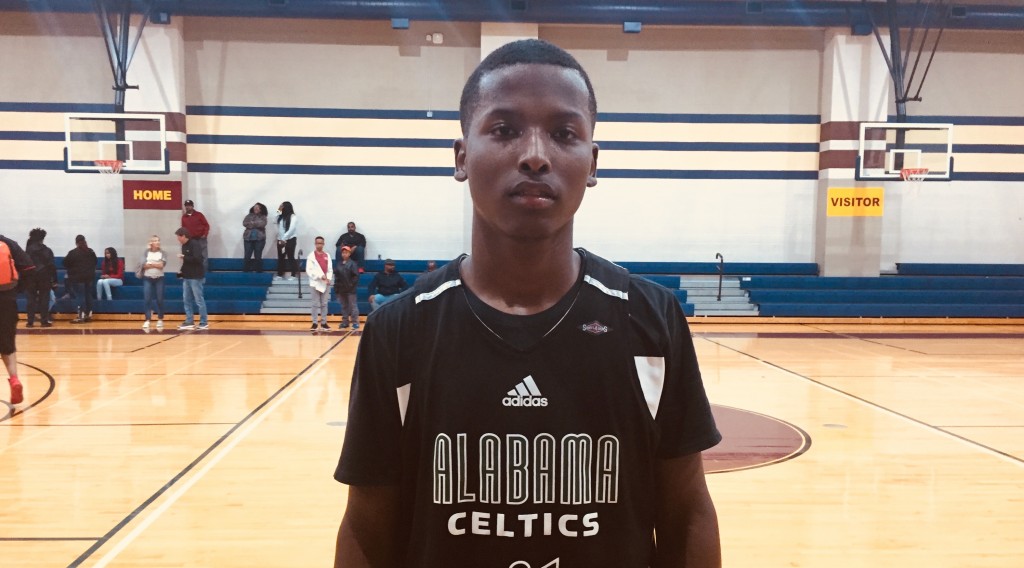 The first stop of the Gulf States Cup took place in Huntsville, Alabama this weekend with some of the best talent in North Alabama and the surrounding areas in attendance.

There were several big storylines from the weekend, but here are the most noteworthy things from Garrett Tucker's point of view ...

Before games started on Friday, I received a tip to watch 2019 Huffman (AL) point guard Eddie Smith closely. If this week was any indication, Smith is on his way to a big spring and summer on the travel circuit.

Playing with the Alabama Celtics, Smith, a 6-foot-2 guard, was phenomenal on Friday night and continued that play throughout the weekend. Smith has good length and size on the perimeter, making him a nightmare for opposing guards. However, the most impressive aspect of his game was his scoring and passing ability.

Playing alongside Travarus Carroll this season at Huffman, Smith sometimes differed to the talented senior. The differing was nowhere to be seen this weekend, as he averaged over 20 points during the weekend. Smith did a nice job of finishing at the rim with contact and some nice floaters, but he also hit a couple of 3’s each game. He was one of the most impressive players from the event and a big reason why the Celtics made it to the championship game on Saturday night.

I expect him to become a hot point guard prospect in the Southeast for low-major and Division II programs. It’s safe to say Smith would have several scholarship offers if last weekend was a live period event.

FUTURE IS BRIGHT FOR NATHAN MOORE

The Pro One Select Navy 17U squad had a solid weekend en route to winning the championship in the 17U division. On a roster loaded with talent, an unlikely prospect shined bright: Nathan Moore.

Moore, a 6-foot-8 big man from Huntsville (AL), took advantage of the opening weekend and made his mark. A fluid and skilled 4 man, Moore averaged 15 points per game. He can score with his back to the basket and also stretches the floor with his shooting ability. However, a new of aspect of his game that shined bright was his ability to run the floor in transition. Moore got several easy buckets in transition because he sprinted the floor after defensive rebounds.

I watched Huntsville High play several times this season. Moore continues to get better each time out, and, once he realizes how good he could be, his recruitment could take off. With a high ACT score at 6-foot-8, this junior will be a prospect high-academic programs at the Division II and low-major level will follow closely. It’s worth noting that Moore’s father played basketball at UA-Huntsville, too.

2020 super-scorer Tony Toney had a big season at Huntsville (AL) Mae Jemison this winter, where he took the reins and was one of the best players for the rebuilding team. He will run with Team Unity this spring and it was evident that the travel season will not stop his rapid pace.

Toney, a 6-foot-2 guard, was one of the premiere scorers in attendance this weekend. In fact, he averaged 27 points over the course of three games and he scored all those points in a variety of ways.

Toney has no problem creating shots for himself off the dribble. He is crafty with the ball in his hands and manufactures points. A strong and stout guard, Toney can score at the rim with contact. He also shot the ball well from behind the arc, knocking down eight 3’s on the weekend. Toney also consistently made it to the free-throw line, too.

A dual sport athlete, Toney also stars on the gridiron for the Jaguars. He hasn’t received much recruiting attention for basketball yet, but that should change in time. He is a guy that will warrant mid-major and high-major attention when it’s all said and done.

NORTH ALABAMA FLAMES HAVE STRONG SHOWING IN 16U DIVISION

The North Alabama Flames capped off a strong opening weekend with a runner-up finish in the 16U division, but that doesn’t do the team justice. They were extremely impressive over the course of the two days. Leading the way for the Flames were 2020 players Tommy Murr and Austin Harvell.

Murr, who averaged nearly 40 points per game this season at Athens (AL) Lindsay Lane, will split time with the Flames and EAB. No matter which team he suits up for, one thing is clear – Murr will have no problem scoring the basketball. The 6-foot-1 point guard is an elite shooter, but he is also a gifted passer and playmaker. He took advantage of the weapons on his team over the weekend.

Harvell had a strong high school season with Clements (AL) and has all the makings of a nice prospect. At 6-foot-5, Harvell is a legitimate perimeter prospect with his ability to shoot the basketball. His versatility and size will also intrigue many college programs throughout the South. He will split time with the Flames and the Alabama Elite Stars throughout the travel season.

Another nice find from the weekend was 2020 Athens (AL) guard Tony Shoulders. A long and athletic combo guard, Shoulders is quick and has some good wheels. He excelled in transition and blew by defenders with his quick first step. There’s a lot to like about his game and he is one we will be watching closely going forward.