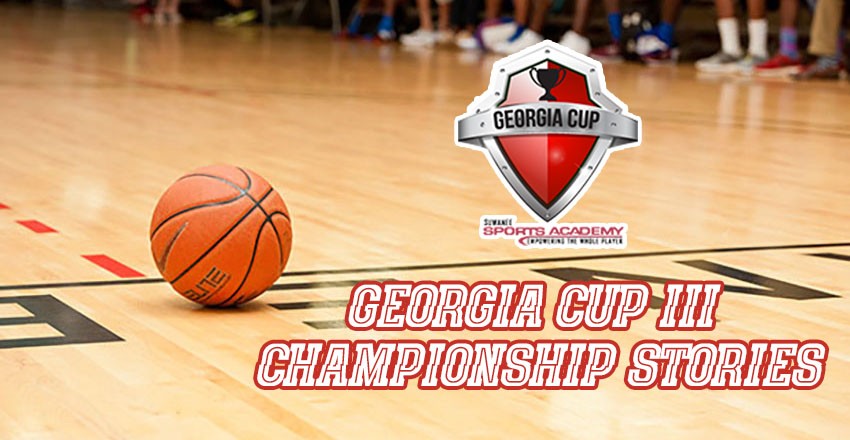 Hoops 360 controlled from the tap and was able to stave off a rally from the Greater NE Georgia Warriors en route to the 17U title. Hoops 360 was relentless for 32 minutes, as they got production from Nate Pickett, Ashton Burley, and Promise Igbanu.

The Greater NE Georgia Warriors made things interesting late behind 11 points from Malik Combs and 10 points from Elijah Robinson.

The Elite Warriors used a second half surge to take down the Savannah Hawks in the 16U division championship game. Resiliency would be the word to describe the Elite Warriors squad. Trailing by eight in the first half, Avery McGarity led the charge with three second quarter 3-pointers to pull his squad back in front.

The second half was a back-and-forth affair as the Hawks’ Jacquan Kearse and Dontavian Leach kept pace with Elite Warriors’ duo of Titus Brown and Micah Roebuck.

Anthony Thomas’ strong weekend for the Hawks was further reinforced during the championship game, but it wasn’t quite enough to overcome a string of key fourth quarter plays from the Warriors’ Brown and Jervouhn Mitchell. Brown finished the game with 14 points for the Elite Warriors while Kearse’s 16 points led the charge for the Savannah Hawks. - Kory Keys

The 15U championship game Opened up game on a pair of 3’s for Wes Bruno and he continued to play well throughout. Tap Out scrappiness disrupted the spurs offense early in the game. Point man Nick Speros did a great job pacing himself and getting paint touches for Atlanta tap out as they exploded and ended the Quarter on a 11-0 Run.

In the start of the 2nd Quarter The Spurs opted for a man press trying to cause turnovers and speed up Tap Out. Speros and Devin McGlockten has led the way for ATL TAP OUT. Speros penetrations and McGlockten inside presence has dominated as they ended so the first half with 11 and 8 points, and a Atlanta Tap lead of 34-26.

Wes Bruno for the Cherokee Spurs continued his good shooting with a 3 to start the 2nd half, and from that point the Spurs slowly swayed the momentum. Jayden Cox-Young for the Spurs was very aggressive and has done a good job of attacking the basket. That allowed the middle to open up and the spurs to get easy shots. The Spurs defense and Bruno’s huge 3 put them up going into the 4th Q 45-43.

The Spurs open up on a 12-6 run and completely took the momentum. They’re now getting easy baskets and getting to the paint for easy for easy foul calls. Once Cherokee took the lead they never gave it back up between great shooting from Bruno and clutch free throws from Cox-Young the Spurs were able to sneak by Top Notch Basketball 61-58. - Cameron Neysmith

The Cherokee Spurs held off a furious rally from the Atlanta Nets to come away with the 14U trophy. The Nets erased a 14-point first half deficit, and eventually took the lead, behind strong play from Khalil Porter and Cristian Willis.

The Spurs were a formidable squad all weekend and it was most evident in the second half when they responded to the Nets’ comeback. Dylan Wolle, Trent Jackson, and Fisher Mitchell were huge down the stretch for the Spurs. All three finished in double figures in the championship game, led by Mitchell’s 17 points.

Georgia State Warriors beat Atlanta Nets 49-40 to win the 13 and under division of the Georgia Cup III tournament on Sunday.

Braylin Giddens scored 10 points mainly from inside and showed off his floor general skills at the point guard position. Jackson Head also contributed 9 points and dominated on the boards in this game and throughout the tournament overall. The Georgia State Warriors demonstrated a balanced attack offense and showed great hustle and effort throughout the game.

Jai Que Hart led the Atlanta Nets with 9 points from success at the three point line. Cole Nash also added 8 points and had tremendous success early on inside the paint. - Chase Crawford

Perfect Practice Elite beat Team Atlanta Nets 45-41 to win the 12 and under division of the Georgia Cup III tournament on Sunday.

Dezmond Williams scored 18 points from drives inside and several made three pointers including the game winning three. MorLeDraeyon Duncan also added 15 points and had the majority of his points come from drives to the basket. Perfect Practice played at a solid tempo and made adequate rotations throughout the tournament en-route to a championship victory.

Braedan Lue led Atlanta Nets with 14 points from inside attacks and was able to get to the foul line numerous times. Malik Ishmail also added 11  points and attacked the basket frequently. - Chase Crawford

The 11U Championship was between Middle Georgia Panthers and Top Notch. The game opened pretty fair w/ both teams trading buckets. M. Grissom was great from the jump slicing and dicing the opposing team, and ended up w/ 6 1st Quarter points. The bugs for the Panthers Tolbert and B. Grisson were the difference makers cleaning up the boards and getting offensive putbacks. Top Notch was in control in the first half leading 29-28. Trace Gaynes was the leader for Top Notch as he had 9 first half points for his squad. Gaynes displayed toughness and grit getting paint touches consistently, and raking up 4 first half steals. M Grisson lead the way w/ 10 first half points. The second half the momentum completely shifted as the Panthers started pressing. That along with the length of Tolbert and B. Grisson really caused problems for Top Notc(Louis). The Panthers went up 53-36 after a 24-8 run. The 4th Q was much of the same as Top Notch couldn’t gain momentum back. The Middle GA Panthers won the game 66-43. M&B Grisson along w/ Tolbert were consistently good throughout the game. Tutt impressed hitting 3 threes and the little man Jones also played well with 9 points for the panthers. M. Grisson lead both teams w/ 20 points in a great Championship W for Middle GA. - Cameron Neysmith

Atlanta Celtics 2026 beat Team Triple Double 60-32 to win the 10 and under division of the Georgia Cup III tournament on Sunday.

Triston Excel-McDonald scored 20 points with his points coming off drives in addition several made three pointers. Kayden Allen also added 17 points and had success from three point range along with drives in transition. The Atlanta Celtics displayed efficient pacing and athleticism throughout the course of the game.

Max Walraven led Triple Double with 12 points with most his points coming from inside. Brennan Burns also added 8 points and thrives in transition offense scoring on multiple occasions. - Chase Crawford

EOTO Elite GA beat Team ATL Blue Chip 33-27 to win the 9 and under division of the Georgia Cup III tournament on Sunday.

Bryce Fraley scored 8 points mainly off of inside baskets. Chase Walker also added 7 points through his ability to push the offensive tempo in transition. EOTO thrived on the defensive side of the ball and produced numerous scoring droughts from the opposition.

Cullen Browne led ATL Blue Chip with 8 points with the majority of his scoring being from inside. Jayden Gilbert also contributed 5 points and was able to draw fouls to get to the free throw line several times throughout the game. - Chase Crawford