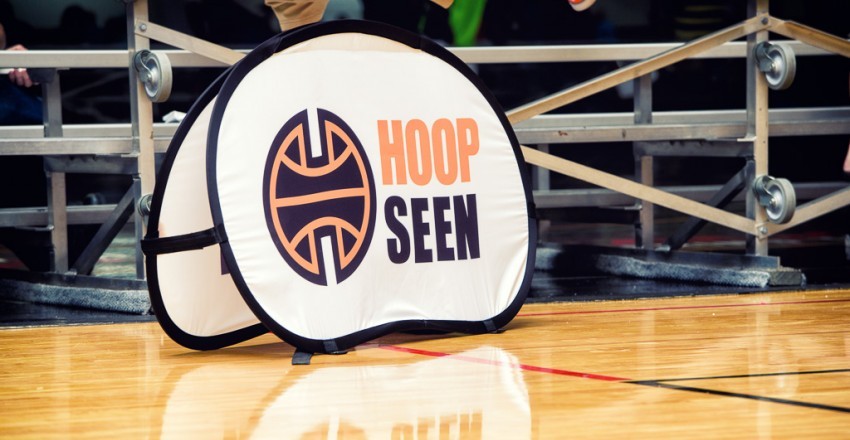 Day two of the HoopSeen Bama Jam concluded in a similar fashion to how it started. The young guys stole the show and finished it off with a nail-biting back-and-forth contest.

The 14U Championship game concluded the two day event with a contest that came down to free-throws deciding the victor with only seconds remaining. The PCBC Stars (AL) pulled out the 39-37 win. Standing out for PCBC Stars was John Witherington 6-3 '22 PF Fairhope MS (AL). The lengthy forward came down with several key rebounds during the stretch of the game. He scored 9 points in the win with his post play ability. It's also hard to overlook Donovan Bein-Garrett 6-8 '22 C Saint Benedict Catholic School (AL). The super-strong post has the ability to do whatever he wants around the paint. He protects the lane very well on the defensive end and he rebounds at a high level on both ends of the court.

Caleb Paige 6-1 '22 G Lakeside School (AL) is a great looking athlete for the Auburn Raptors (AL). He has the ability to take a game over. He gets into the lane at a high level. He defends very hard when playing on-ball defense. The other player that stood out for the Raptors was Caden Brown 6-4 '22 C Auburn Junior High (AL). He is a long and lanky post that can put the ball on the floor and he scores in a variety of ways. He showed to be a smart player that played very hard.

EAB Tigers 2021 (TN) 15U team had one of the best point guards that I saw the entire weekend. Zion Swader 6-0 '21 PG Siegel HS (TN) is a commanding point that runs the team. He has a feel for the game and knows how to control the tempo. He pushes the ball at the right times and he slows the pace to get the opponents off balance. Swader is very athletic with a very high basketball IQ. He finishes strong at the rack with high elevation. He can get into the paint whenever he wants to but he picks and chooses his spots. He scored 20 points in the 92-71 semifinal win over Pro One Flight (AL). The best part of his game might be his defense. He gets really low on the defensive end and is a high level defender. The young point will get some major next level attention over the next few years.

Pro One Select 15U Navy (AL) continued to roll. I had the opportunity to see them earlier in the travel season and it seems as they are just getting better and better. The key to their success is having two key players to stop. They can hit you inside or out so you have to pick your defensive poison. Landan Williams 6-7 '21 F/C Alexandria HS (AL) is starting to develop an outside game to go with his dominant inside game. He has a really nice touch around the basket and is recently started knocking some three's down. He scored 26 points in the 85-75 semifinal win over Memphis Bulls Elite (TN).

The outside part of the opponents problem is Brody Peebles 6-2 '21 G Hartselle HS (AL). He can shoot the ball really well or he can take you off the dribble. He has the ability to draw fouls at a high pace when he gets into the paint. He shoots free-throws at an extremely high percentage. The sneaky athletic guard just has the ability to put the ball in the hole. He scores on all levels and can be defined as one of them players that has that "it" quality. He managed to drop 28 points in the semifinal win.

It's not uncommon at all for the Mississippi kids to hear me preaching about free-throws. Sunday provided a key example of how the charity stripe shots can win ball games. This concept was evident in the 17U semifinal game between the Memphis Bulls Elite (TN) and Team H. Hustle (FL). With :01 remaining in the game, Jaylon Taylor 6-2 '19 G Fayettte-Ware HS (TN) went to the line down 54-53. He missed the first which could've been the game winner but he did connect on the second to tie the game and send it into overtime to give his team a couple more minutes of play. As overtime winded down, the Bulls found themselves at the line again. With :02 remaining in overtime, Ashton Taylor 5-7 '19 G Southwind HS (TN) went to the line with a tied game at 58. He nailed both free-throws to give the Bulls the 60-58 win and send his team to the Championship game.