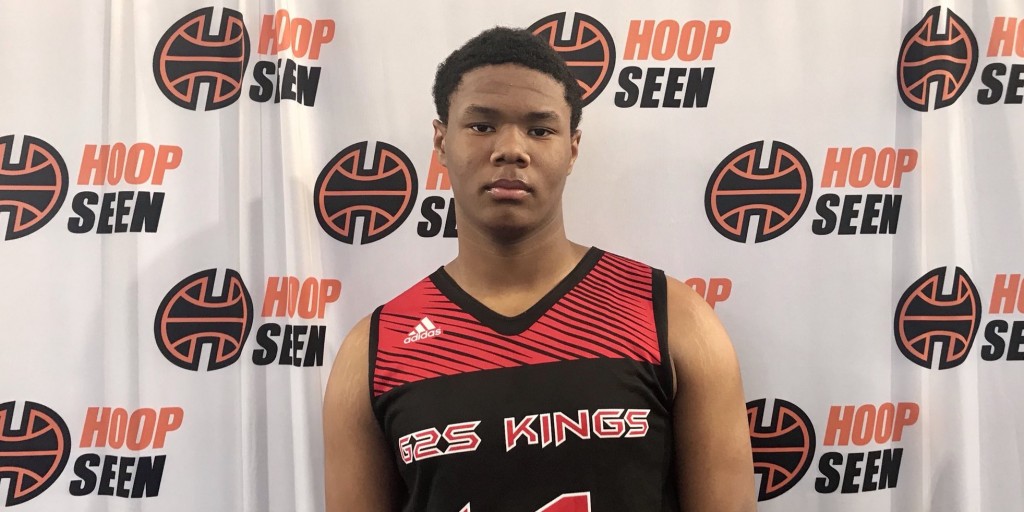 The live period kicked off this weekend and it didn’t take long for the action to ramp up at the spectacular Finley Center in Hoover, Alabama. It was a great start to some up-and-coming young players looking to make a splash in front of the college coaches in attendance.

PLAYING UP AND PLAYING BIG

My biggest surprise of the day kicked off early this morning with the G2S Kings (AL) in the 16U division. The Grind2Shine team from western Alabama had a roster full of 2021 kids playing up a level. The biggest was in size and structure. Bryson Hall (pictured above) 6-6 ’21 F/C Tuscaloosa County HS (AL) is a triple-double machine in the making. The offense was ran through him from the low and high post. He picked the defense apart with his pin-point passing from the paint. He also uses his body well with a variety of low post moves to score when he can’t find an open man. The young and strong big will be one to keep an eye on in the future for the class of ’21 Alabama rankings. The Kings won over the Atlanta Playmakers Elite (GA) 45-37.

In two appearances today, Jamal Moore 6-4 ’19 G Okolona HS (MS) dropped two smooth 20-point performances. He showed that he could score on all levels as he had 22 and 24 points for the Mississippi Spartans (MS) 17U team. He nailed some critical 3’s on the day amassing five total. He was a combined 11-14 from the free-throw line. The long and lanky guard will be a big factor for the Spartans as the summer continues and should turn some heads as the live period continues.

The Memphis Bulls Elite (TN) 17U team had a strong bounce-back performance today after an early loss this morning. The Bulls knocked off the Spartans 75-66 in a thriller. Key contributors for the M-Town squad were Landon Winters and Marquavious Lobbins. Lobbins 6-2 ’19 G Whitehaven HS (TN) chipped in a strong 26 points, mostly coming around the lane. Winters 6-3 2019 SG Munford HS (TN) scored his a little further out. He got really hot in the second half. So hot he scored all of his 21 points in that frame with all coming from behind the arc. He nailed seven second half treys in possibly the hottest individual shooting performance on the day.

For the Memphis Bulls Elite (TN) 15U team, they had a young Bull mess around and almost get an untraditional triple-double. 2021 Jamal Anderson 6-5 West Tallahatchie HS (MS) racked up 14 points with his high motor running the court in transition. He had an unmeasured amount of rebounds but I wouldn’t have any issue guessing it was closer to 18 to 20 boards. The untraditional part of it was his 9 accounted for blocks all in the second half. He could’ve easily reached the triple-double status if I was looking for them in the first half. The strong-bodied athlete will be gaining some serious attention this summer if he continues this strong play. His performance helped the Bulls gain a 56-45 victory over Pro One Select 15U White (AL).

TOO MUCH SIZE TO HANDLE

The Wolverine Basketball (AL) 16U team used their size for the early 64-44 victory over the Mississippi Bobcats (MS). Shemar Dixon 6-6 ’19 F/C Dadeville HS (AL) used his size to dominate the paint as he totaled 22 points and was a menace on the defensive end. He altered shots and protected the rim as he guided his team to the win.

NOT JUST A TEAM NAME

Very fitting that this next player is on Team H. Hustle (FL). The 17U team hustled to get the victory over the Mississippi Elite Bobcats (MS) by the final of 60-52. Jeremy Johnson 6-4 ’18 F Wekiva HS (FL) was the true definition of hustle. He played with high energy the whole game and crashed the boards extremely hard. His defensive pressure was tight with on-ball defense. He plays bigger around the lane than what his size suggest.