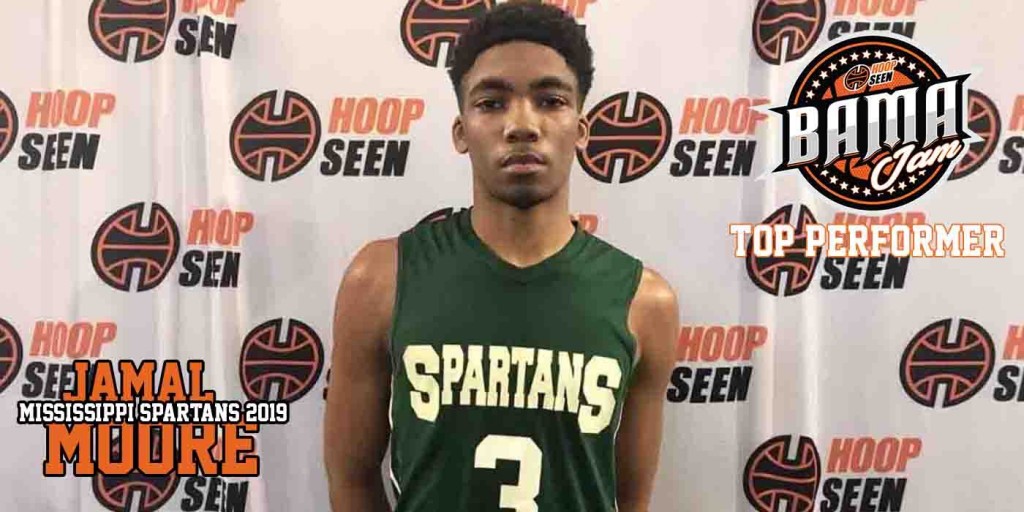 The 17U division at the Bama Jam was full of talented sleeper prospects over the weekend. Here is our list of top performers from in inaugural event from Hoover, Alabama...

Ben Sheppard, 2019 CG, God’s Property: Sheppard had a strong showing on Saturday and made his case as one of the best players overall at the Bama Jam. The 6-foot-4 combo guard can play both guard spots effectively, as he showcased his shooting ability, as well as his ball-handling and high basketball IQ. Sheppard ended the high school season on a high note and is a player coaches will want to see in the future. Expect him to be followed by SoCon, OVC, and Big South schools. – Garrett Tucker

Javon Anderson, 2019 SG, Carolina Pressure: If there's one player that did himself a favor with his play at our Bama Jam its Carolina Pressure guard Javon Anderson. His scoring ability got him noticed by a couple of Division 1 coaches as a guard that can fill it up at a moments notice. The game in which he had 29 points including the game winner was when I officially made note of him. Never rattled or in a rush, Javon has good size, strength and skill for a future division 1 guard. – Tai Young

K.J. Johnson, 2019 PG, EAB: The case can easily be made for Johnson being the top overall performer from the event. The 6-foot-2 guard played as consistent as anyone and showcased his well-rounded game. Johnson caught everyone’s eye with his high IQ and ability to shoot the ball from deep. The lefty generated a ton of points over the weekend, whether it was scoring or assisting. He’s already a priority for several programs, but that number is going to exponentially increase heading into the summer. – Garrett Tucker

Jamal Moore, 2019 SG, Mississippi Spartans: The unsung hero of the Mississippi 1A State Champs showed why he can be a force during the first live period event. Moore (pictured above), the 6-4 Okolona resident, is very long and he used his length to lead the Spartans to a 3-1 record. He scored on all levels over the weekend on his way to averaging 21 ppg during the event. He knocked down the long ball at a two per game rate. He was 15-18 from the free-throw line during the event. Moore would clear a defensive board and push the ball up the court where he is deadly around the rim in transition. He protected the rim on the defensive end with his wiry wing-span. He would meet opposing players at the rim or run them down from behind to get the swats. Moore will be one to keep an eye on over the summer to watch as he progresses up the Mississippi rankings. – Jeff Roberts

Isiah Green, 2019 CG, Pro One Select Grey: There weren’t many more entertaining players to watch this weekend than 2019 guard Isiah Green. The junior was one of the top scorers in the event, as pumped in 25 points per game. Green, a 5-foot-9 scorer, showed his ability to fill it up in a hurry from behind the arc with his shooting ability, but he also finished efficiently around the rim. The spunky guard acted as a sparkplug on the floor and the rest of his team followed. – Garrett Tucker

Cheickna Sissoko, 2019 C, PCBC Stars: Sissoko was one of the nice surprises from the weekend. At 6-foot-9, the Mali native has a nice frame to go along with his size. He is a valuable asset on the defensive end of the floor with his rebounding and defensive abilities, but he was extremely intriguing on the offensive end, too. Sissoko hit a handful of mid-range shots over the course of the weekend and should be a name college coaches remember going forward. He will be a quality frontline piece for a low to mid-major program. – Garrett Tucker

BJ Comer, 2019 CG, Team Ferg: Multiple 30 point games tend to get you noticed by our HoopSeen staff whenever you're at one of our events and this weekend was no different. BJ is a really intriguing prospect because everything he did on the court was so effortless. At times it felt like I was watching the coming out party for a player that was tired of being modest. BJ had possessions where he made the defense pick how they wanted to give up their points either at the rim or from way behind the arc. These type of players require some attention from both coaches and defenses alike. – Tai Young

Keon Johnson, 2020 SG, EAB Tigers: It feels like EAB guard Keon Johnson picks up an offer on a weekly basis and his play at our Bama Jam gave some insight as to why. There were always a handful of possessions every game where Keon would make a move or two that would remind you of why he has a true high major following. 6'5 wings with dynamic skill and athleticism have been coveted since the creation of the game, and Keon fits that mold. The role of a lockdown defender is also not out of reach as he appears to be playing with more of an edge on the defensive end. – Tai Young

DJ Hicks, 2019 PF, SC Focus: Hicks was one of the most dominant bigs at the event. He stands at 6-8 and has a very wide and muscular frame. He uses his strength to create space on both ends of the court. The South Carolina prospect was a rebounding monster. He bullied his way around the paint and kept his opponents in check. He runs the court on both ends. He moves well without the ball. He always seemed to position himself for an open dunk. He would aggressively get the flush every time he got the opportunity. Hicks should be one college Coaches put on their list to see this summer. – Jeff Roberts

Marquavious Lobbins, 2019 SG, Memphis Bulls Elite: Lobbins proved to be a scorer that can get to the rim whenever he wants to. He paced the Bulls with 19 ppg while leading them to a 3-2 record with the only two losses coming to the 17U Champs. He is a scoring guard that has a good size frame at 6-2. His wing-span is very, very long. He doesn't have that killer speed and it looked as if he was blowing by all defenders in slow motion. His initial move is what separated him from the defenders. He used that to get to the goal and either make the basket after contact or draw the contact and get to the line. Either way, he had a knack for getting the fouls on the defenders. He played the passing lanes with his help side defense to create steals and fast breaks for his team. The Whitehaven resident will be a huge piece for them next season. – Jeff Roberts