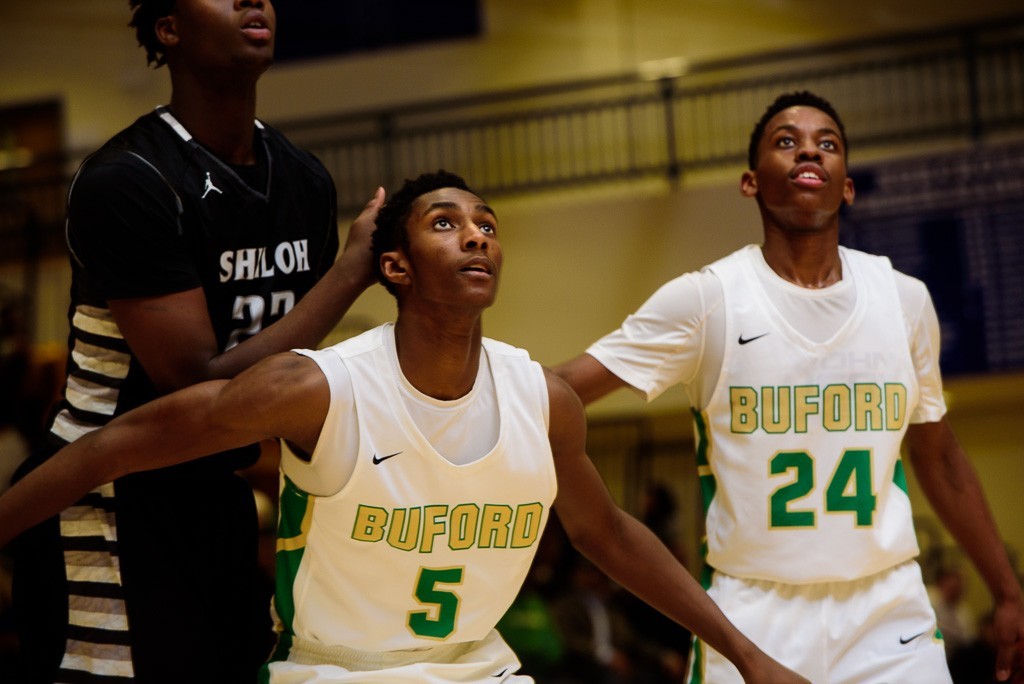 Put on your dancing shoes, kids. The postseason is officially here and we are excited to see how the state tournament brackets all shake out. Today we break down the first round games in AAAAA and the players to watch in our continued look at the GHSA state playoffs.

• Buford won it last year and return so many pieces from that group. They are bigger and better than last year’s squad, too.

• Or can Warner Robins dethrone Buford from the top of the AAAAA kingdom?

Columbia (19-8) vs. Jackson (24-2): You could argue this is one of the five best overall games in the first round of all of the classifications. Less than 10 miles apart off I-20, the first round battle of East Atlanta will be loud, and terrific. Jackson is paced by senior guard Marquavis Carter, who has been sensational for Jackson, putting up 23.4 points a game this year. Columbia is deep with talent across the board and several players can be the go-to option.

Riverwood (19-8) vs Miller Grove (18-7): Talk about a terrific first-round pairing. Riverwood has consistently been one of the most underrated programs in Atlanta since Buck Jenkins has taken over the program in 2012. On the flip side, Miller Grove has been the most successful team in the postseason over the last decade. Miller Grove is bigger and stronger, and that may play a role in the end. RIverwood is paced by senior guard Rudy Fitzgibbons and his 19 points a game.

Eagle’s Landing (21-6) vs McIntosh (18-9): In a pairing of two of the best teams from Atlanta’s south suburbs, fans will have a chance to see a terrific first round match-up. Both schools have been a regular in conversations regarding the best teams in the class.

Longest winning streak going into the bracket: Starr’s Mill at 10.

Leading scorer, according to MaxPreps, in the bracket: Demonte Demore, Banneker 25.1

Biggest Cinderella in the bracket (team with the worst record): Ware County. The Waycross squad won five times this season, with four of those wins coming at the hands of just two teams. They beat South Effingham and Charlton County both times they played. Collectively, SEHS and CCHS combined for nine total wins.

Best Senior in the bracket: Nelson Phillips, Warner Robins. The Georgia State bound wing is as competitive as they come and ready to end his career with a state title. This Warner Robins club may be better than the 2013-2014 team that went 27-3. Phillips has so much to do with that, too.

Best Junior in the bracket: Marcus Watson, Buford. The junior has all of the physical gifts you’d want from a star. He’s 6-foot-6, built like a linebacker, attacks the rim as aggressive as anyone in his class nationally. Watson helped Buford win a title last year. He’s even better this season. And that’s bad news for the rest of AAAAA. Truthfully, he’s the best player in the bracket.

Underclassman to Watch: Sophomore KD Johnson, Southwest Dekalb. The speedy and athletic guard is pure entertainment. He’s a blur to the rim and an acrobat in the air. SW Dekalb is a fun team to watch compete and Johnson is a big reason why. He’s averaging 17 points, 4.9 rebounds, 4.4 assists and 3.4 steals a game on the season.

Nathan Presnell, Hiram, JR: The 6-foot-8 big man has blossomed this season on the hardwood and he leads the Hornets in scoring, rebounding and blocked shots. He was featured as one of our juniors on the rise last month. The quarterback could use the post-season to springboard his basketball recruitment. We’ll be on hand to see him play against Cedar Shoals on Saturday.

James Glisson, III, SW Dekalb, JR: One of the great things about the Preview camp series is getting a head start on players like Glisson. He’s a bit of a throwback type of player. SW Dekalb has really good young guards and having a clean up guy like Glisson gives coach Eugene Brown some insurance for second chance opportunities.

Cameron Bryant, SOPH & Dontay King, JR, Dutchtown: Bryant, a 6-foot-5 wing continues to get better and better. He led Dutchtown, a Cinderella from the region tournament week, in scoring this season at just over 10 a game. He’ll be a name we hear more about this spring but we could more of it here in the next couple of weeks in the playoffs. Down in the paint, King came alive in the region tournament. He scored 38 points and grabbed 16 rebounds a game. The 6-foot-7 forward joined the team at the semester break, moving in from South Carolina.