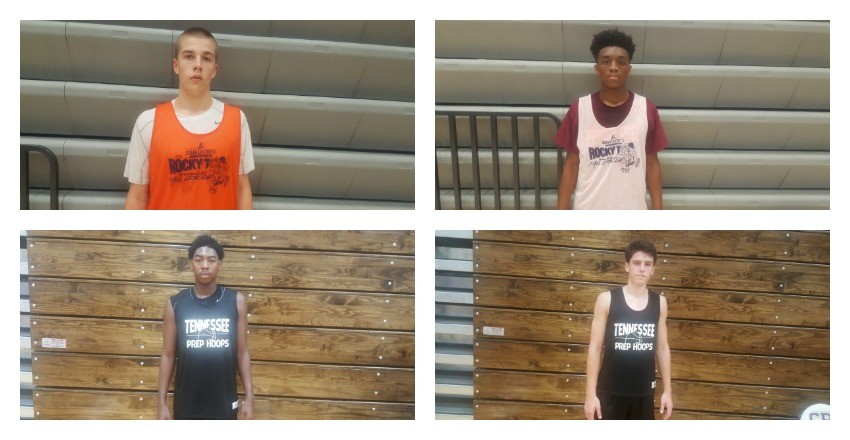 Practice in Tennessee kicks off early next week so hoops appear to be in full effect. What's been happening during the Fall as everyone prepares for a dynamic prep campaign?

CATCHING UP ON SOME 2018 COMMITMENTS

The commitment ladder has been slow for the state of Tennessee in the Class of 2018 with only four players pledging their wares to D1 schools thus far. Sharpshooting Caden Mills (Van Buren County) was the earliest with his pledge to Tennessee Tech during the summer months.

One of our favorites and a Hoop Seen regular Junior Clay (McCallie) took the early plunge as well ending his recruitment with his decision to play for the Golden Eagles of Tennessee Tech University.

Finally this past week, Mark Freeman (Southwind) will go from one metropolis to another as the 5'11 point guard from Memphis is headed to the Big Apple and Long Island University.

Tennessee Prep Hoops concluded our 12th and 11th year respectively of giving the players in the Knoxville and Nashville area a quality Fall League to get themselves prepared for the rigors of the upcoming high school season. The Tennessee Prep Hoops Nashville Fall League and the Rocky Top Fall League produced a nice cast of prospects that need to become household names to those of you perusing this article. Here are 20 players selected from both leagues who shined bright.

This kid makes me smile, a consummate leader and quintessential point guard skills. Has massive IQ, strokes the ball and passes like a young Stockton. His size concerns but his will, desire and love do not.

There are still diamonds in the rough, so to my surprise this jumping jack landed at our Fall League and proceeded to make things his own. Skilled, super athletic, long and powerful. When the skills really catch-up, WATCH OUT!!!

Old school skilled in the post, back to the basket moves over either shoulder, the short hook with either hand, rebounds like he means it, blocks shots and will even step out and drill one. You need him on your radar right now.

Might he be the best shooter on this side of the state, he might be. Skilled young player who will be devastating when his body fills out. He has above average ability and IQ, if he grows, seriously look out.

You need to watch this kid more than one time to appreciate what he brings to the table. Big body, skilled, unselfish, capable scorer and when he gets in real game shape really a handful for an opposing guard.

State tourney MVP as a freshman saw his effectiveness drop somewhat as he listened to the wrong folks and read his own press clippings. He came back in the Fall League with a vengeance, great stroke, working on his body.

Here are the facts: he's big, he's coachable, he loves to play and he has a motor. Can you work with that? I think you can. Improved every game in the league and is excessive gym time away from being a steal for a patient program.

Oakland University commit, this lanky lead guard has skills, length, scoring ability and high IQ. He likes to score right now and need to mature a bit but there is no denying his skill level and ability to really be a solid contributor.

Rocky Top Fall League scoring champion at 28.6 per game including a 52 point effort. He is small and is truly more of a shooting guard than a point, to his detriment right now. He is a winner, he competes and someone will love him.

Skilled small guard who has a devastating first step, can score in bunches, likes to pass the ball and would be a national name if he were 6'3. Soft handles, turns the corner, quick, finishes at the rim, floater, has it all.

Tough, hard-nosed big kid from an athletic family. He is a horse on the interior, he rebounds and defends in the post and has enough foot speed to guard the new age swing four. Offensively he needs to find a working stroke.

This kid loves to compete, long and determined he has a winning edge and has a knack for putting the ball inside the cylinder. His outside stroke is adequate, some mechanical work needed but he competes and you will love him.

Coming off some injuries that slowed down his progress, this kid has a major stroke from deep, he has length and is slowly finding his way. His body is coming along and his skills are as well, maturity soon to follow, love him.

Rocky Top Fall League MVP with a sterling effort throughout. Big body gets his shot when he needs room, has range and understands changing speeds and utilizing the hesitation dribble to offset his lack of overt quickness. Baller.

Delta State commitment has a very bright future when his body catches up to his skill level and effort. He can stroke the ball, great coming off a screen, can put it on the floor and using his length to be a capable defender.

Powerful youngster who explodes to the boards, blocks shots and finishes with a flourish. He likes the spin move as his post move of choice but will need to add some perimeter skills if he remains at this size. So aggressive. So good.

Started slow but came on strong in the final three weeks of the league. His length is eye-catching, his shooting is admired but his body is holding him back. Must get stronger thus more confident then the sky is literally the limit.

One of only a handful of seniors on this list. His confidence is plentiful right now, his stroke has become a weapon, he has a motor and is more athletic than given credit. Small college superstar, no doubt in my mind.

Averaged 27.3 per game in the Fall League. Great defender, good length, slight build will be an issue till he gets stronger. His scoring is unquestioned and his mid-range harkens back to our era. Competes and great kid. Star.

Skilled yet undersized post player could be a phenom on a smaller collegiate level. He has al the tools, a go-to move, a counter, rebounds, soft hands, passes well from the post and can simply put it in the hole. Body has potential too.

THE ROAD TO THE TITLE GOES THROUGH MEMPHIS EAST

What an insight huh? The several time defending Class AAA state champions just keep adding pieces to the puzzle and will, quote me if you wish, will bring home the Gold Ball for several years to come barring any unforeseen mishaps.  Here is a quick overview of what to expect this season as pre-season favorites other than the Mustangs who feature the top three players in the state in the Class of 2019, James Wiseman, Chandler Lawson and Malcom Dandridge, another transfer in senior Ryan Boyce plus many other including freshman phenom Jonathon Lawson.

Oak Ridge (Lost a great deal to graduation but still strong with Javonte Thomas and the Smiths, Marcus and Levert)

Oakland (Keishawn Davidson is a superb guard, Patriots have depth and sophomore Ray Tyler as well)

Southwind (Mark Freeman is the key, who can be the other Memphis representative at state)

Marshall County (K.J. Johnson and Caleb Fields make one of the best backcourts in the state)

BTW (If your making a Class A list you best have them on here, just saying)

Grace Christian (First year in the privates, C.J. Gettlefinger and Grant Ledford lead the way back to state)

Lausanne (Sky Forrest is ready to make his mark among the big boys, this could be his chance)