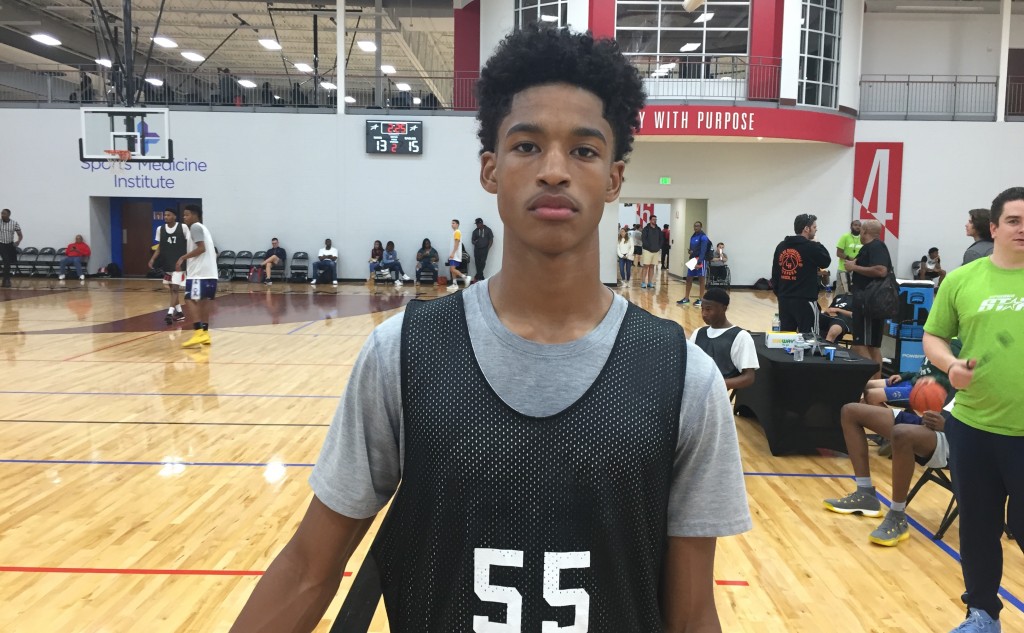 Loaded with talent, here are the top performers from the Upward Stars Combine.

Ja’Queze Kirby, 2020 SF, Jeff Davis (GA): After an impressive showing at the Underclassmen Elite Preview last weekend, Kirby added onto an already impressive month of play. The 6-foot-5 forward led the way last weekend with his athleticism, toughness, and energy displayed from start to finish. All of that was on display in Spartanburg, but Kirby also showed some more parts of his game. He showed a reliable jump-shot as he hit multiple three-point attempts throughout the day. With his strength and size, Kirby is still nearly impossible to stop going to the rim and has a chance to be an elite defender.

Shaman Alston, 2019 CG, Nations Ford (SC): Alston (pictured above) was the most impressive player of the day, as he made his mark with his shooting ability. The 6-foot-3 combo guard hit a number of mid-range pull-ups off the bounce. A smooth operator, Alston also plays with good pace and has a high IQ. Wingate is the junior’s lone offer, but that will change sooner rather than later.

Milos Stajcic, 2018 PF, Freedom Christian Academy (SC): A recent Siberian import, Stajcic was one of the top big men at the combine. With a nice skill-set and the ability to shoot the ball from the perimeter, the available senior can score the basketball in a variety of ways. Stajcic scored with his back to the basket in multiple ways and also knocked down 3’s. Despite only being here for a month, Stajcic has already earned a handful of scholarship offers – don’t expect that to change anytime soon.

P.J. Hall, 2020 PF, Dorman (SC): Despite being an underclassmen, Hall, a 6-foot-8 big man, was one of the best players in the paint. The son of two former collegiate basketball players, Hall has the genes of a gifted athlete. He has long arms, a strong base and frame, and good hands and feet. Hall still has some development to do, but the sophomore is a quality rebounder and sound scorer in the post. He will be one to watch for in South Carolina in the future.

Vincent Cole, 2018 SF, York Prep (SC): Cole may have been the most impressive perimeter scorer at the combine, as he showed his ability to shoot the ball throughout the course of the day. Over the years, the senior has improved his shooting touch, but he remains a quality slasher, too. Cole is down to a final three of East Tennessee State, Georgia Southern, and Texas Tech.

Myles Tate, 2020 PG, Dorman (SC): Just like Ja’Queze Kirby, Tate also had a big day at the Upward Stars Combine following the Elite Preview. The 6-foot point guard is one of the fastest prospects end-to-end in the South. When he wasn’t blowing by defenders and making plays at the rim, the sophomore did a good job of knocking down shots in rhythm. Tate also has excellent vision in transition, as he racked up multiple assists. It’s still early for him, but Tate should be one of the top guards in the Southeast in 2020.

Jahmari Harvey, 2019 CG, Freedom Christian Academy (SC): Harvey plays with a lot of swagger and confidence each time he steps on the floor. The 6-foot-4 slithery slasher was one of the best rim attackers at the event, as he sliced through defenses on his way to tough finishes. Harvey is extremely creative with the ball in his hands and has the ability to create shots for himself. With a couple of low and mid-major offers in hand, Harvey is poised for a big high school season.

Malcolm Wilson, 2019 C, Ridge View (SC): A legit 6-foot-11, Wilson was one of the best future prospects at the Upward Stars Combine. With his length and size, Wilson is disruptive on the defensive end with his ability to block shots. He still has a ways to go on the offensive end, but the junior runs like a deer and has all the potential in the world. With his upside and high academics, Wilson is going to hear a lot from a mixture of high-major programs and Ivy League schools.