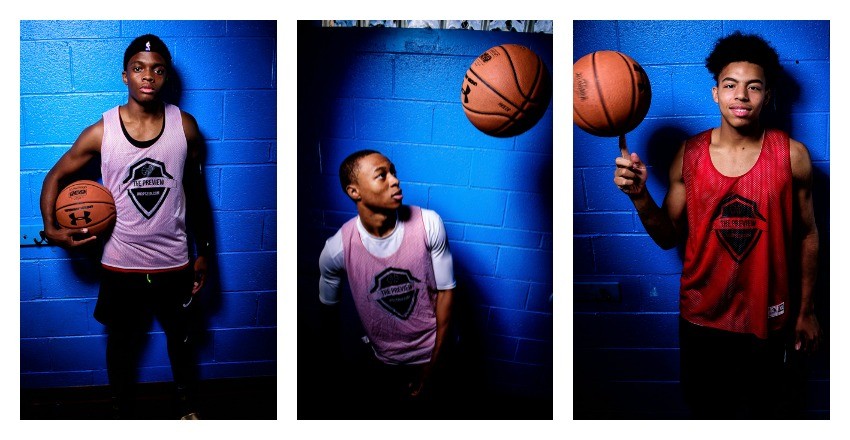 Quincy Carter, Collins Hill, 2018: The 6-foot-1 guard mixed up his scoring as an inside-outside guy throughout the camp. Never fancy, Carter shined in the simplicity. - Justin Young

Jaylen Cole-Williams, Meadowcreek, 2019: The 5-foot-9 guard did a nice job of knocking down three-pointers at the camp. He did his best work when hunting down the triple. - Justin Young​
​​​​​​
Eric Coleman, King’s Ridge Christian, 2019: The 6-foot-6 forward went to work on Saturday, but not from his accustom wing position. Instead, Coleman showcased a physicality on the low block, taking advantage of smaller defenders. Using a nice step through to free himself when going to the middle, Coleman had enough strength and finesse to finish through traffic. Coleman has improved each year from his freshman campaign, always adding a new dimension to his game. - Kyle Sandy

Sam Jennings, North Atlanta, 2019: A guard with nice size, Jennings showed off his crafty handles when probing defenses, keeping his dribble alive. He struggled to finish in the paint, but made up for it with his three-point stroke, choosing his spots wisely. Jennings looked comfortable running the offense. - Kyle Sandy

Cameron Nayebi, Lambert, 2019: The 6-foot-1 guard scored 25 points over the course of three games, including a 12 point outing. He played a throwback style and put up points with strength around the rim. - Justin Young

Dequarius Nicholas, Meadowcreek, 2018: For the Meadowcreek Mustangs to become a state title contender, their lead-guard play must be stabilized. Dequarius Nicholas looks more than capable of being the man for the job. Not overly flashy, Nicholas was in the right spot more often than not and made plays on both ends of the floor for his team. He pulled down 11 rebounds and handed out six assists in an 82-80 win. Nicholas could stand to add a deep ball to his offensive arsenal to keep defenses honest, but his quickness will give teams fits. - Kyle Sandy

Marcus Scott, Brunswick, 2018: The 5-foot-8 speedster from the Georgia coast did what he does well. He scored in bunches, utilizing his good speed and his perimeter touch. Scott is wired to score and he’s getting better as a facilitator and decision-maker with the ball in his hands. - Justin Young

Sha'mi Shields, South Paulding, 2019: Sha'mi Shields accepted the role of glue guy and made hustle plays for his team. Shields wasn't as skilled scoring the ball as some of his teammates, but his toughness and attitude meshed well and made an impact. - Kyle Sandy

Romano Solis, Furtah Prep, 2019: Raw at first glance, Romano Solis did a nice job using his 6-foot-10 frame to his advantage. The big man always kept the ball high and was a nuisance on the glass. He even showed off a 15-foot baseline jumper. Solis needs some more polish but his height and rebounding make him an interesting project. - Kyle Sandy