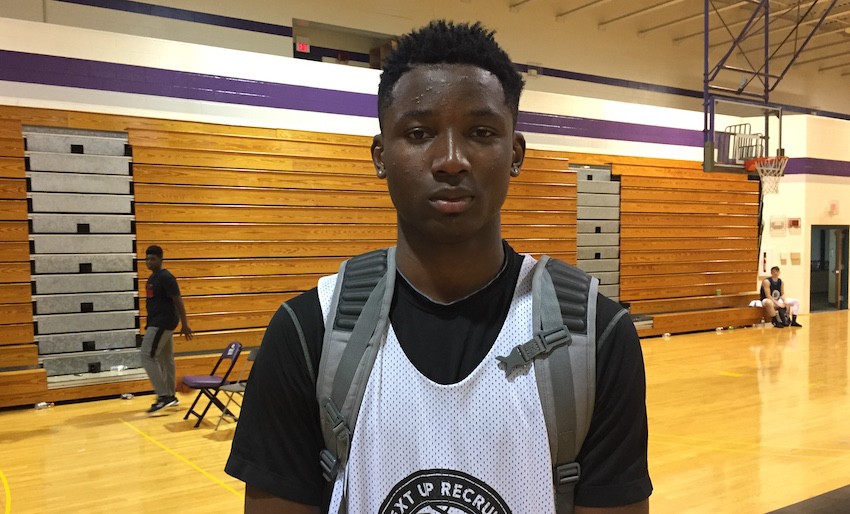 Some of the top prospects in the state of Kentucky and its surrounding areas converged at Asbury University for the Next Up Recruits Elite Camp on Saturday. HoopSeen.com had the opportunity to see some of the most talented players in Kentucky, but some other names emerged, too.

Here are the top performers from the weekend, headlined by a talented rising freshman that will jump on the national radar in time:

Seth Fallon, 2019 CG, Parkersburg South (WV): It didn’t take long for Fallon to catch the eyes of those in attendance. The 6-foot-2 guard torched the nets in drill-work with his shooting ability and it continued into the first round of game-play. Fallon has the ability to score in bunches with his shooting ability from behind the three-point line, as he showed the ability to knock down shots in several consecutive possessions. The West Virginia native is skilled with both hands and is an underrated passer. He made several nice deliveries to teammates through traffic for easy buckets.

Dontaie Allen, 2019 SF, Pendleton County (KY): There weren’t many better slashers on-hand than 6-foot-6 wing Dontaie Allen, and he constantly stayed in attack mode throughout the day Saturday. The rising junior sliced and diced through opposing defenses, using his athleticism to get to the rim and finish with contact. Allen excelled in transition with his up-beat style of play and looks to be a guy that college programs will want to invest in early. Allen has some upside to his game, and, with his length and size on the wing, he should be a priority recruit for mid-major programs throughout the Southeast and Midwest.

Jonathan Kuminga, 2021 SF: Despite being one of the youngest prospects in attendance Saturday, rising freshman Jonathan Kuminga (pictured above) was the best long-term prospect in the field. A recent import from Africa, Kuminga has all the physical tools you look for in a prospect. The 6-foot-7 wing brings versatility to both ends of the floor with his length, size, and athleticism. He can easily play the 1-4 at any given time. Kuminga makes things look easy on the offensive end, especially for his age. The bouncy forward excels around the rim, but he has a methodical approach to his game. He allows the game to come to him and doesn’t look to force things. There’s still a long way to go for this young pup, but expect Kuminga to be a nationally known prospect sooner rather than later.

Andrew Taylor, 2018 PG, Corbin (KY): Taylor impressed throughout the spring on the Adidas Gauntlet circuit on his way to landing a dozen mid-major scholarship offers. If Saturday was any indication, the 6-foot-2 point guard is on track for a big July to end the summer, too. Taylor is a shooting threat from behind the arc, as he showcased at #Gibbons in May. However, he’s more than just a shooting specialist. Taylor is crafty with the ball in his hands and isn’t afraid to be creative. He highlighted the day with several flashy passes and crafty finishes at the rim. He will be extremely popular in a few weeks, as Belmont, Davidson, and Furman are just a handful of schools that will be tracking him.

Oscar Tshiebwe, 2019 PF, Mountain Mission (WV): There wasn’t much known about Tshiebwe heading into camp, but by the event’s conclusion, the 6-foot-8 power forward made his mark as the most productive player in attendance. With extremely long arms for his size, Tshiebwe is a rebounding machine on both ends of the floor. He plays with an endless motor and is automatically one of the hardest workers when he steps on the floor. The rising junior plays above his shoulders and his style of play will translate to the next level.

KyKy Tandy, 2019 CG, University Heights Academy (KY): Tandy has the ability to put points on the board in a hurry and he proved that in his home state Saturday. With an explosive first step and elite athleticism, the 6-foot-1 combo guard is nearly impossible to keep out of the lane. Tandy differentiates himself from the rest of his peers with the ability to create his own shot so well. He takes some ill-advised shots at times, but it’s hard to deny how talented Tandy can be off the bounce.

Jayden Scrubb, 2018 SF, Trinity (KY): Scrubb may have been the most dominant player on Saturday. How? Because of his knack for getting to the rim, of course. The athletic 6-foot-6 forward was the best guy at getting downhill and making plays at the goal, as he dominated opposing players with his strength and jumping ability at the goal. Scrubb can finish in acrobatic ways all while having defenders draped on top of him. He’s already a high-major prospect, but if he can get his jumper consistent, he’s a potential top-100 caliber player in the 2018 class.

Jalen Johnson, 2018 PG, Hopkinsville (KY): Johnson was one of the most gifted athletes in attendance Saturday. A two-sport star, the Hopkinsville native is juggling whether to play basketball or football in college. Basketball was his primary focus this weekend and he excelled on the hardwood. The 6-foot-2 guard was great off the dribble, as he lived in the lane and seemingly got wherever he wanted. Johnson is tough and plays with a high motor. He was also very impressive on the defensive end, where he challenged other point guards and showed his ability to guard the basketball. Samford has extended a basketball scholarship offer, while Murray State is his lone football offer. However, Michigan head coach John Harbaugh touched base last week to express his interest in the quarterback. The next few months will be interesting to see which route he chooses, but there is no doubt that Johnson can play basketball at the next level.

Mawich Kachjaani, 2019 PF, International School of Indiana (IN): There wasn’t a more skilled big man in attendance on Saturday than Kachjaani. The long, lanky 6-foot-9 stretch 4 man caught the eyes of those in attendance with his upside and potential, as well as his ability to play in a half-court setting. He showed patience in the post, executing his moves and making tough passes on his own clock. The rising junior has terrific footwork and moves well for his size. The only glaring weakness for Kachjaani right now is all physical. With a thin and frail frame, he will need to add some weight to his skinny frame before he steps foot on a college campus.

Justin Powell, 2020 PG, Trinity (KY): Powell doesn’t have a dominant personality or game, but he doesn’t need the ball in his hands to be effective. The 6-foot-3 point guard showcased his excellent court vision in transition, which led to beautiful passes for easy buckets throughout the day. The Louisville native is a sneaky athlete and reliable shooter, but his feel for the game and basketball IQ is what will have college coaches raving. It’s still early but Powell has to be considered one of the top young prospects in the state of Kentucky.