Best of the South: The clash of the titans 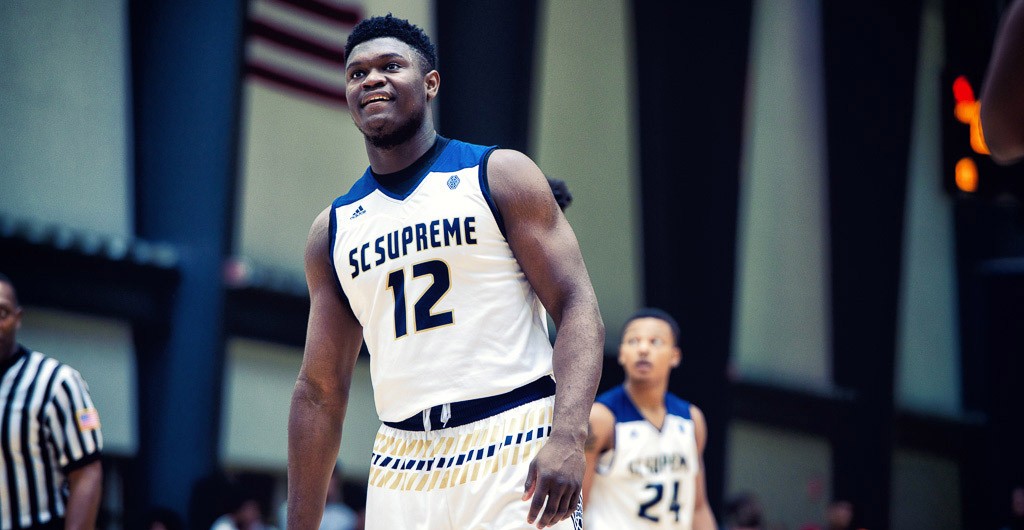 The posturing is a sport in and of itself. Getting there early helped and being tall certainly helped your cause. Getting the best seat or view for the E1T1 vs. South Carolina Supreme game was the main objective for hoop heads on Thursday night at the Best of the South.

The people wanted to see the show between Zion Williamson and Emmitt Williams. And they stacked the sidelines and baselines long before the game even tipped off.

The warm-up line brought the crowd to their feet and the energy seemed to gain momentum every time one of the freakish athletes attacked the rim. The posturing wasn’t just on the sidelines with the crowd, kids and cell phones.

The two five-star forwards kept close watch on each other and played up to the crowd with their antics above the rim. It was a contest of anything you can do, I can do better. Long before the ball was even tossed for the tip, the energy was palpable. It was a scene that even the great grassroots showman Sonny Vaccaro could appreciate.

The crowd was armed with their cell phones and thumbs on red record buttons. Their faces were painted with smiles that were anchored in anticipation. They waited for wow. And they didn’t have to wait for long.

The gorgeous Lake Point Sports Complex was filled with the roars of the crowd that packed it in for the show. And the college coaches were stacked deep. Coaches from all levels filled the bleachers down the sidelines and stood wherever there was space. Whether they were there to evaluate or not, they weren’t disappointed with the show either. How couldn’t they be?

SC Supreme head coach Lee Anderson held a toddler in his arms for a majority of the game, and the little one slept on his shoulder during the action. Steve Reece got after his bench on missed plays. “Let’s give the people what they came for,” he’d say in timeouts. “Let’s give them a show!”

E1T1 won 70-67 on a game-winning three-pointer from guard Nick Honor after a drive and kick from Will Richardson. Williamson was the show throughout the game. He finished with 37 points and nine rebounds. Williams finished with nine points and three rebounds.

It was an epic showing from the South Carolina native. He lived up to the hype in every way.

Williamson started his national journey at a HoopSeen event, coming of age on the 15U division with the SC Hornets. He was one of the best story starters at the storied event. Coming from Gibbons as a rising sophomore to celebrity status has been a journey he’s reflected on quite a bit.

“It’s a great feeling. It’s definitely a surreal feeling,” Williamson said. “But in my mind I know that I have to keep grinding like a nobody, which is what I did to get here.”

The basketball world was buzzing ever since word of this game got out, Williams said, and he used the hype for motivation.

“It was a great matchup. Felt great to go against someone ranked higher than me,” Williams said. “There was a lot of hype surrounding this game, a lot of energy in the gym. We tried to put on a show and we did.”

“I think I’ve played against every top player that I should. Zion was the last one. I’m glad we got to do it,” Williams said after the game.

“I have played against a lot of great players, and he’s definitely right up there with the best players that I’ve competed against,” he said. “But as far as the matchup goes, I’m honestly just trying to get a win, because at the end of the day that’s all that really matters.”

In the end, everyone that was at the Best of the South won. The posturing was worth it in every way.

Carter Wilson and Bre Singleton contributed to this story.