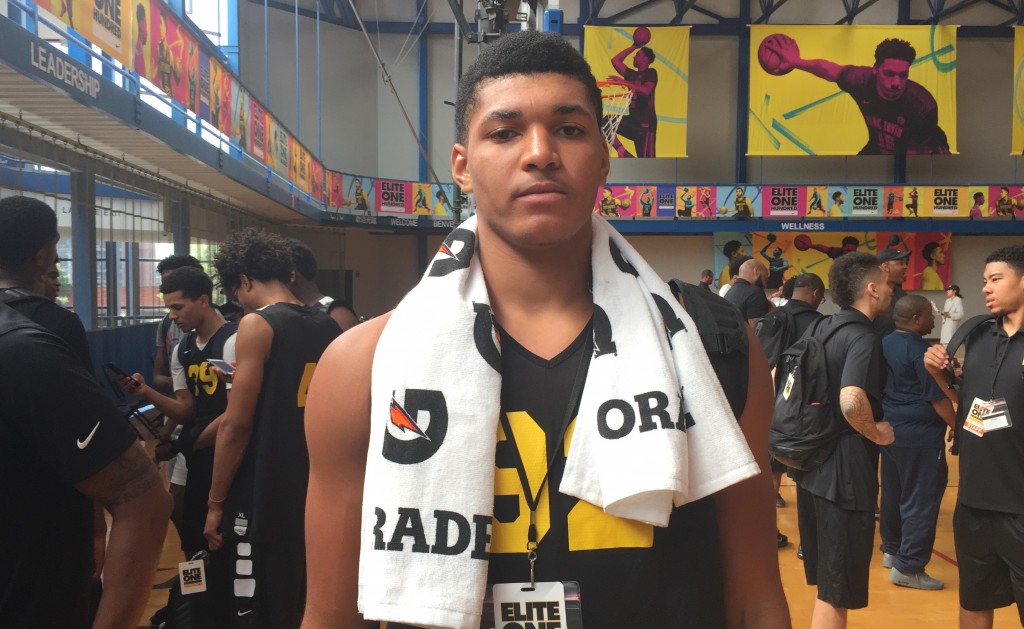 Post players typically get lost in the shuffle with ball-dominant guards, but this group of big men did a nice job of asserting themselves on both ends of the floor. In fact, some of the most promising long-term prospects were in this group. Here are the top post prospects from the Elite 100:

Aidan Igiehon, 2019 C, Lawrence Woodmere Academy (NY): Igiehon was the most impressive prospect I saw over the weekend. The 6-foot-10 big man was fantastic from start to finish and dominated on the low block with a variety of post moves and counters. He didn’t get pushed off his spot and consistently battled in the paint. Igiehon has a solid set of hands and moves his feet well. He showed the ability to help and recover in pick-and-roll scenarios, as well as being capable of blocking shots in the paint. With few holes in his offensive arsenal and solid defense, Igiehon is an elite post prospect in the 2019 class and a potential McDonald’s All-American.

Tyreek Smith, 2019 PF, Trinity Christian (TX): Smith was one of the most energetic, high energy post players in the camp. The 6-foot-8 power forward is an ideal run-and-jump face-up 4 man with his athleticism and versatility. He exudes toughness and is productive during his time on the floor. Most of his offensive damage comes from trash rebounds and easy dishes, but he also looked promising taking defenders off the dribble. Smith has only been playing basketball for a few years, but he will be a prime target for Big 12 and SEC programs.

Francis Okoro, 2019 PF, Normal Community West (IL): For the longest, Koro has been recognized because of his rebounding specialty. The 6-foot-8 big man is one of the most effective rebounders in high school basketball and his offense is progressing quickly, too. Okoro has impressive footwork and is developing ways to score for himself while facing the basket.

Carl Lewis, 2019 C, Lynwood (CA): Of the players at the Elite 100, there weren’t many more prospects that had more natural ability than Lewis (pictured above). The 6-foot-9 big man has a strong, sturdy frame and some bounce. He is quick and explosive off his feet for his size and is unstoppable around the basket. Lewis has soft hands and a nice touch around the basket, as well as the ability to step out and knock down some shots. He is extremely talented and should be considered one of the top big men in 2019.

Hunter Dickinson, 2020 C, Dematha Catholic (MD): It’s hard to believe Dickinson just completed his freshman year, but the 6-foot-11 big man was one of the most skilled big men at the Elite 100. Fully capable of passing and scoring with either hand, Dickinson showcased an elite passing ability out of the post. He recognizes double-teams early and uses his court vision to find the open man consistently. Dickinson has soft hands and knows his angles well. He can finish off the glass or right over the front of the rim. His recruitment is just beginning, but Dickinson will be one of the most sought after post prospects in the 2020 class.

Roman Wilson, 2019 PF, Park Hill (MO): Wilson’s weekend ended early due to an injury, but prior to his exit, the rising junior was one of the best defensive prospects on hand in St. Louis. The 6-foot-10 big man is a gifted shot-blocker with his length and timing and has a knack for getting weak-side blocks. Wilson sprints the length of the floor and creates easy baskets for himself in transition, too. He still isn’t comfortable on the offensive end of the floor, but he oozes potential and has a chance to develop a decent skill-set in the half-court.

Drew Timme, 2019 PF, JJ Pearce (TX): Timme emerged as a breakout candidate from the Elite 100, as he proved to be a reliable option in the post throughout the camp. The 6-foot-8 big man was a reliable scorer in the paint in a variety of ways. He was efficient at the rim and mixed in some shots over both shoulders. Timme also can stretch the floor by knocking down mid-range shots. He has good hands and a soft touch, making him an intriguing option in the Dallas area.