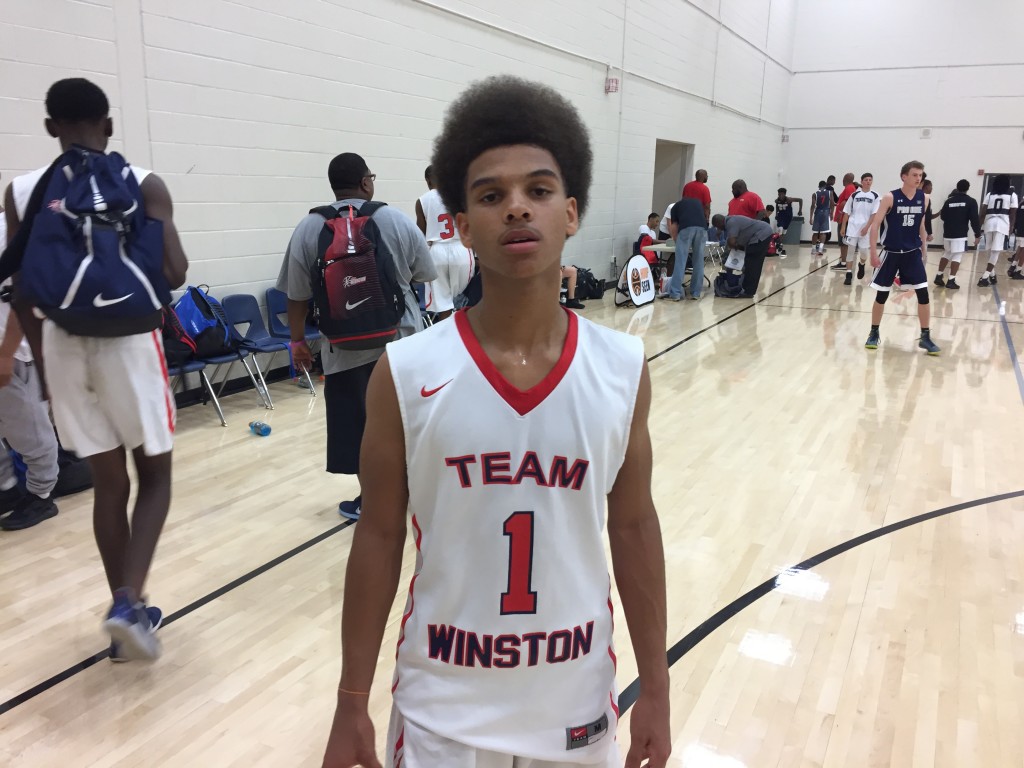 Not many stages shine brighter than the Bob Gibbons Tournament of Champions. On Friday night, the 16U division had plenty of eye-catching performances at Collins Hill High School to tip-off the event.

Team Winston held off the Louisville Magic in a tremendous game, 70-63.  Up 32-30 at the half thanks to Quinton Morton-Robertson’s 11 points, Team Winston had to withstand a barrage from KyKy Tandy in the second half. Tandy, a 6-foot-2 combo guard who claims everybody but Duke and North Carolina as heavily recruiting him, poured in 23 of his game-high 33 points in second half. He sank four free throws to get him going and then turned on the afterburners, getting to the rim at will and nailing three three-pointers to keep the defense honest.

While the two teams traded buckets, Morton-Robertson (pictured) and Mysta Goodloe had all the answers for Team Winston. Morton-Robertson, a back-to-back state champion at Radford High School who averaged 20.4 points during the high school season, finished with 24 tonight. Standing only 5-foot-7, Morton-Robertson still scored from all three levels, hitting two threes, using the mid-range and going 6-of-8 from the line. He says that he isn’t concerned about who is recruiting him right now and is more focused on making himself and his teammates better. Goodloe, a 6-foot-3 guard, pitched in 16 points and grabbed 14 rebounds. His energy was contagious, coming up with a handful of 50-50 balls.

The 16U Georgia Stars EYBL have taken shape after a few shufflings of the deck. With a mixture of Game Elite Gauntlet 2019’s and a few former A.O.T. standouts, the Stars have found a strong nucleus for the rest of the summer. They rolled to a 69-42 victory over Upward Stars Upstate White. 7-foot center Alex Powell, now healthy, played one of his best games, putting in 13 points to give the Stars a 38-24 halftime lead. Though he didn’t score in the second half, Powell showed why he is such a tantalizing prospect if he continues to get stronger and is able to stay on the court. He knocked down two threes and blocked two shots. His soft touch stretches defenses out, but he will need to make sure he doesn’t float away from the paint too often on offense.

Marcus Watson put in 12 points highlighted by a ferocious windmill slam going baseline. The Buford Wolf also added four rebounds and five assists. Cam Rowland and Jalen Mason provided major sparks off the bench in the backcourt. Rowland (North Gwinnett) drained two quick threes while Mason had a strong floor game with seven points, five rebounds, four assists and two steals. Mason holds offers from Georgia State and North Florida and is looking to make the most of his new-found opportunities now that the Stars have found their own identity.

In the loss, Zach Baldinelli scored 14 points and collected nine rebounds. The lefty played with great composure and competitiveness.