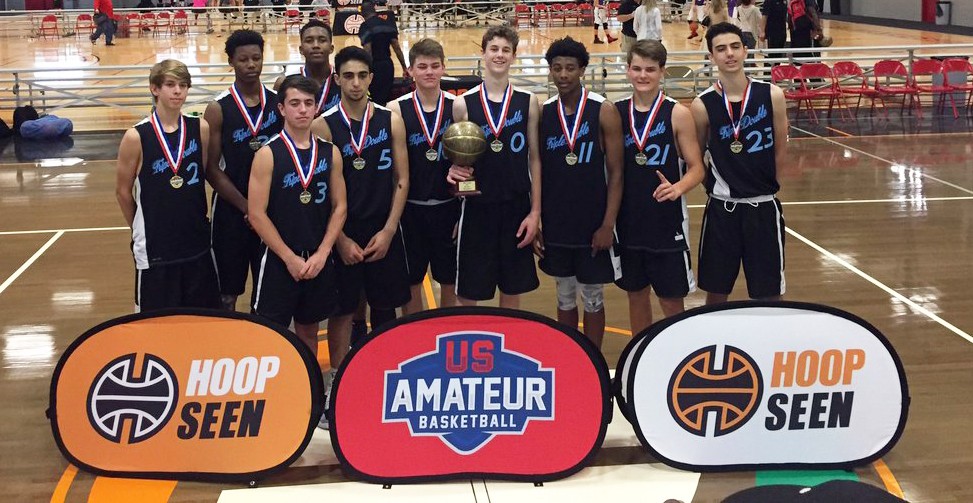 The Columbia Hoyas won the 15U Black Championship 58-50 over Dynasty Elite. Despite the Hoyas only having 5 players, they were able to keep the game close, tying it up at 27 at halftime. Arthur Knight hit 6 threes on his way to 19 points to help the Hoyas pull away. Tyrik McDaniel did his part, putting up 20 in the win. Dynasty Elite’s Tyler Fields put up 12 points while Sterling Johnson managed 11. The team from Columbia had too much firepower for the Elite to handle. - Bre Singleton

Hype South won 68-65 over TNBC Select to win the 15U Orange Championship game. In what was a one point game at the half, Hype South separated itself late and took a 7 point lead into the fourth. Late turnovers by Hype South allowed TNBC to creep back into the game late, pulling to within one with a minute left to play. Hype South big man Courtney Green scored a bucket and got the foul with 15 seconds on the clock. He finished with 23 points. Bryson Wooten put up 16 and Collin Tarver added 17 to form Hype South’s offensive triple threat. - Bre Singleton

Triple Double beat the Middle Georgia Ballers 71-65 to clinch the 16U Championship at the Georgia Cup IV. The game was extremely close throughout and was filled with high intensity and energy from both sides. Mitch Ganote poured in a game high 26 points to lead Triple Double to the close win. LJ Glisson followed with 12 points and Cameron Nayebi put up 11 points in the win. Keshun Howser led the Ballers with 13 points while Jayln Williams and Manasseh Thompson followed with 10 points each. - Joe Chapman

EOTO – Taylor pulled out a big 68-55 win over Georgia Stars FC to take home the 17U Championship at the Georgia Cup IV. Orvel Graham put up 16 points while Corey Myart Jr. followed him with 14 points of his own. Kobe Haley and Jullan Grajales also put up 8 apiece in the win. Quan Carpenter had 18 points for the Stars and Robert Norwood followed him with 12 points in the loss. - Joe Chapman